Patrick Lockerby
Hornswoggled with a Boondoggle

Etymology isn't a true science, but any etymologist worthy of the name needs to adopt scientific methods if he or she is to avoid falling into the trap of producing another piece of false etymology.

That's etymology, but if you mouth entomology, as many of your peers do, I had as lief an insect spoke my lines.
(Hamlet  Act 3, Scene 2 - almost.)

I had as lief an insect spoke my lines
Image courtesy makintosh, fanpop.com


An exercise in etymology

Whenever I find a word or phrase whose origins are uncertain I start to scratch my alleged brain.  My starting point in finding a possible origin is to discover the probable time and place of first use.   Quite often the sound or spelling can help to pinpoint a broad geographical region.  Take for example the word shemozzle (or schemozzle), meaning 'a noisy confusion' or 'a brawl'.  We know that many words beginning with sh or sch come from German or Yiddish.  A majority of such words beginning with the sound shm or sh-vowel-m come from Yiddish.  My first guess for shemozzle, then, would be that it is from Yiddish and indeed that appears to be a fact.  The Online Etymology Dictionary entry for shemozzle states that it comes from Yiddish.  The date 1889 is given, so we have a clue as to how the word entered into use in English slang.

...
An immense trade in new and second-hand clothing, and in new boots, shoes, furs, caps, &c., for exportation to the colonies, is carried on in this quarter, and by the chosen people. The London artisan often purchases the tools of his trade in Petticoat-lane on Sunday mornings; where also may be bought the highly spiced confectionery in which the children of Israel delight ...

Much of the slang used by my father H.R. Lockerby - a Cockney - can be traced back to Victorian London.  To trace the roots of these words one must attempt to untangle the interwoven slang terms of a true cosmopolis.  We know that those Victorians just loved to rattle the odd saber or two and we know about conscripting the scum of the Earth and turning them into fine fellows.  As these 'fine fellows' traveled the British Empire they adopted local words.  Back home once more they continued to adapt their mother tongue.  One might expect, then, to find an early adoption of 'shemozzle' in the memoirs of a soldier.  And indeed one does - we do - I did.

For a time all went well with the training of these Egyptians, until, as a test of their efficiency, night operations were ordered, which included a dash into a wadi and out the other side. This effort produced what can only be described as a "shemozzle": horses, waggons, and men piled themselves up in a hopeless tangle at the bottom of the wadi, and the night operations came to an abrupt end.

With Our Army In Palestine, Antony Bluett, 1919

Note the use of quotes.  These indicate either that a word is of recent coinage or that it is in some way informal.

It may help to pinpoint the origin to know that the phrase appears to be mid 19th American in origin. The earliest citation I can find for the phrase is from The New Hampshire Statesman&State Journal, August 1834:

"Will the editor of the Courier explain this black affair. We want no equivocation - 'face the music' this time."

Almost all other early citations are American. Sadly, none of them give the slightest clue as to the source, or reason for, the music being faced.

Thanks to Gary Martin I was able to immediately focus on American history in an attempt to track this saying down.  Note once more the use of quotes.  The saying uses ordinary words, so the quotes seem not to denote an informal use, but rather, recency of coinage.  In our context, 'recency' can mean a few years or a few tens of years.  I focused on the years 1800 to 1834.  Given that so much slang originates with the military, I narrowed down my search to find a major military campaign of those times in which music played a significant role.  Now, what do you do if you don't want to face the music ?  You run away from trouble.  Voila!

On at least two occasions, British forces in Canada utilized the bugle in a manner that transcended simple signaling. On October 26,1813, Lieutenant Colonel Charles De Salaberry (who learned of bugle horn methods as an aide for Major General Francis de Rottenburg's 60th Rifles of the British Military (33a)) distributed his buglers during the battle of Cateaugay to sound calls from the woods. The advance signaled from the woods was heard by the Americans, who retreated when it was assumed that a charge was forthcoming. However, De Salaberry did not have sufficient troops for a successful advance and sent his buglers out to “fool” his adversaries—which he did. A similar tactic was utilized at the battle of Longwoods on March 4, 1814. Buglers were posted in three different directions as they signaled commands. The purpose was to mask the actual direction of the British assault.

from Evolution of the military bugle in the 19th Century

It may be the case that instead of running away, soldiers hearing the enemy sound the charge would turn to face the music.  But the sounding of the charge may have been a ploy: the real attack may be coming from another direction.

... when the bugles sounded the advance, our right wing advanced rapidly between the left of the rebels and the Cumberland River, completely doubling upon a rebel division which the rebels had posted to blockade the river. A battery was taken here by our forces and sent to the rear.

The rebels had by this time perceived that our attack on the right was a feint, and HOOD soon attempted to atone for his mistake, but he was too late, as our right had established a force on the main bank of the river, and were steadily advancing. 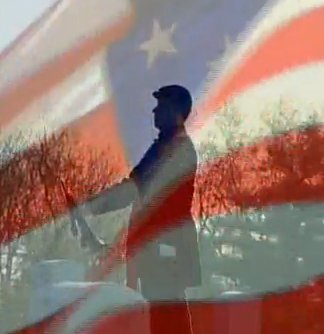 The British end-of-day bugle call Last Post and the U.S. Taps have different linguistic, musical and military origins.  There is a wonderful YouTube video explaining the origin of Taps.  The Last Post is always played on Remembrance Sunday in Britain.

Hornswoggled with a boondoggle

Now that the sun has set slowly in the west and the bugler has played taps, we finally come to the etymology of hornswoggled.  Now, I do not have the definitive etymology, but from the context you may guess that I surmise that it may have to do with the military bugle.  A common name for the bugle and many similar instruments is 'horn'.  Most likely this is because early instruments were made out of green materials even before the color green was invented.

Now 'swoggle' is an oddball word to meld with horn.  Or it would be, if there were any such word which appears not to be the case.  However, 'boggle' is fairly close in sound and has been in widespread use for a very long time.  'Doggle' in the sense of 'a waste of time' may be from the Scots word for a child's marble.  The term 'boondoggle' could not have been coined circa 1935 had the term 'doggle' not been already in common use.

Merriam Webster states that 'hornswoggled' is of unknown origin with a first known use circa 1829.  I speculate that it was coined by soldiers who had been bamboozled in battle.  They had been misled by bugle calls - whether by the enemy or as 'friendly fire' - and had been swindled out of their victory.  Perhaps they had been 'horn-swindled' or horn doggled'.

Could hornswoggled be a coinage from horn and a portmanteau swindle-doggle = swoggle ?