Patrick Lockerby
How To Get Well And Truly Shellacked

Now I'm not recommending for every future president that they take a shellacking like they, like I did last night.
Barack Obama,November 07 2010,
as reported by
Australian Broadcasting Corporation
http://www.abc.net.au/insiders/content/2010/s3059266.htm

President Obama's use of the word 'shellacking' has puzzled some folks here in England, where the term has long since fallen out of use.

The term originally meant 'the application of shellac varnish', but has come to mean 'the giving of a beating or thrashing'.  The reasons behind that meaning are scientifically interesting.

Shellac is a type of lacquer.  The etymology of those two words gives us a place to start our investigations.

Shellac is a type of lacquer made by dissolving flakes of lac - a resin -  in alcohol.  Quite apart from its use as a type of varnish, shellac once had many more uses.  Notably, it was used in the making of felt items, particularly hats.  There was a time when the making of hats required that the workers breath in the fumes of shellac.  This affected their brains and made them stagger like drunkards.  Thanks to "unwarranted government interference in the proper conduct of free enterprise", small children are now deprived of the simple joys of pointing to felt industry workers in the street and yelling "He's shellacked!" at the top of their voices. 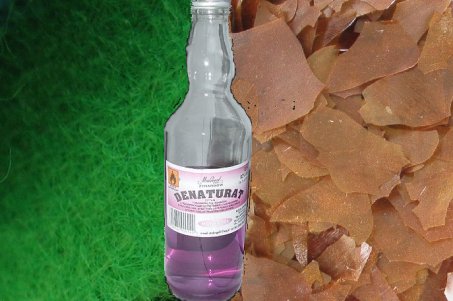 Shellac may be applied by brush on the surface of felt and allowed to soak in or included before the fibers are beaten into felt with wooden implements.  The idea of making felt by beating fibers may have added somewhat to the meaning of 'shellacked' by combining ideas of having consumed alcohol and having been thrashed.

Now it may well be that someone who has suffered a beating will stagger around like a drunkard - as though shellacked.  However, there is only one way to get well and truly shellacked and that is to drink the stuff - subject to the caveat below.

It sometimes happens that a person addicted to alcohol would 'sample the goods' in a felt factory.  Shellac is a poor substitute for gin.  Not only did these people get well and truly shellacked: they were likely to get a nasty case of intestinal obstruction from the formation of a bezoar.  A shellac bezoar would have caused excruciating pain and would likely be fatal if not surgically removed.

So if you want to get well and truly shellacked, all you need do is drink lac dissolved in alcohol.  Instead of getting all liquored up, you get all lacquered up.  Shellac may kill you, but what a beautiful finish!

Caveat: I am fairly confident that the performance of an experiment based on this article will not be covered by your health insurance.

This began as a site where I could share some books and writers I've loved. But since I put together the etymology dictionary, it's becoming a site for people who are curious about what sort of no-life obsessive-compulsive would do something like that. And I've also opened it up to include my stands in ongoing discussions and brawls about topics such as religion, linguistics, and the American Civil War. That's three topics, by the way; not one.
Douglas Harper,
http://www.etymonline.com/columns/bio.htm