RR Auction of Amherst New Hampshire has announced a 2013 Space and Aviation Autograph and Artifact Auction.  Items on sale will appeal to aviation and space buffs.  RR Auction states that "Offerings include over 850 museum quality artifacts from the Golden Age of aviation and space flight".


I am currently writing a series of articles about the history of the development of the pacemaker, so quite naturally the item which interested me the most was an electrocardiograph of

The heartbeats that made the first moon landing possible

From the RR Auctions web page: 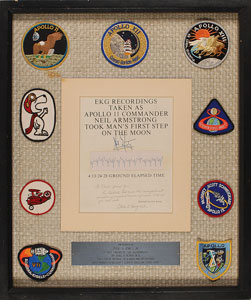 
Copyright: fair use claim.
Fair use is claimed under 17 U.S.C. 107 on the grounds that this is a news story and that it is likely to enhance the value of the item.
The Chatter Box
More Articles All Articles
About