I present here more evidence in support of my suggestion that the Voynich manuscript may date from a period between 1350 to 1450, perhaps even earlier.  This is part 7 of an occasional series which commenced in part 1 with information about Wilfrid and Ethel Voynich.

A Bartizan is a turret which overhangs a fortified wall.  Merlons are the parts of fortified walls between the gaps of castellations,  crenellations or battlements.  Merlons come in many shapes.  The most common shape in Europe is square.  In Egypt there are many buildings with vee-shaped merlons, giving the top of the wall a zig-zag appearance.  In two other types the square is surmounted by either a triangular or semicircular cap.  In the VM the types portrayed are square and swallowtail.  The picture below, which combines details from three locations in the 'rosettes' or map page of the VM, shows two bartizans and extensive swallowtail merlons. 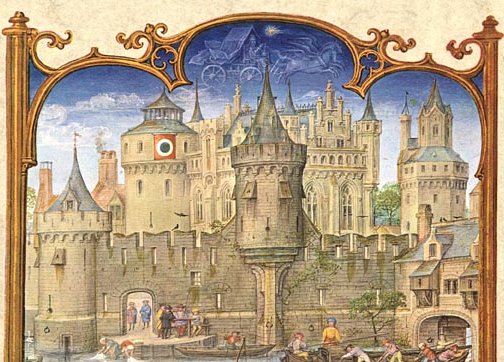 What struck me about this picture is that the artist has taken the trouble to show signs of aging, suggesting that the wall on which this artwork is modelled was already old when seen by the artist.  Encouraged by this observation I went in search of further evidence.

"The oldest palaces, those of the thirteenth century, are sterner even than the stern Strozzi ; they stand among the later houses like fighting men with vizors down amid the grave, long-gowned scholars and lawgivers of the quattrocento. Their walls rise sheer and plain, sometimes to the very top of the battlements (for they often keep their merlons, square-headed, if Guelph, forked, if Ghibelline), sometimes broken at the summit by the corbelled parapet; their plainly bordered windows are but slightly recessed, and the grating sets its teeth down hard into the stone, instead of caging the whole opening, as in later palaces."

Encouraged by this description I went in search of a manuscript of the era showing swallowtail merlons.  I found an illustration in the Tacuinum Sanitatis (Codex Vindobonensis, series nova 2644, fol. 104v), c. 1370-1400.  A detail is shown below. 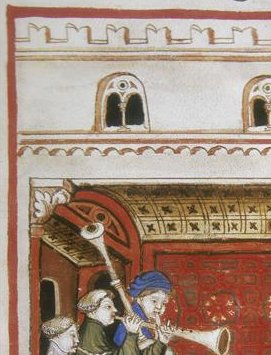 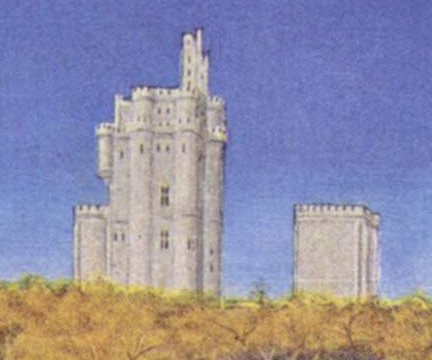 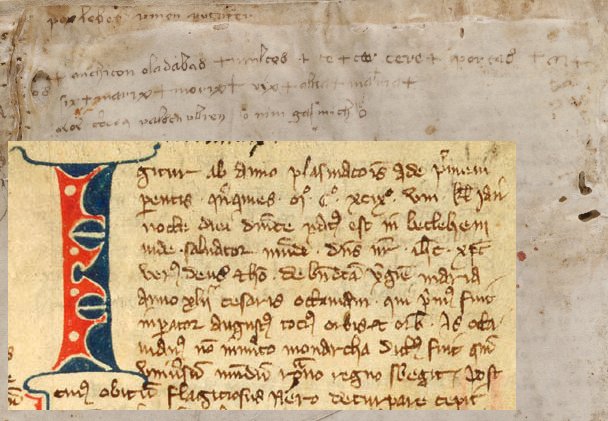 Whilst the description in Italian Cities suggests 13th century, later reconstruction and modification cannot be ruled out.  However, the illustrations suggest dates before which these fortification types must have been introduced.  The dates for the fortification details, therefore,  and for the script shown, fall well within my suggested VM date range of 1350 to 1450.  For reasons which I shall give in a later article, I suggest that the VM was more likely to have been created at the earlier end of that date range.

My researches continue.  I am currently building a database of herbal illustrations and descriptions. I am also using my computer to analyse the distribution of words and characters in the VM.  I hope to report my findings here soon.

Continued in The Voynich Manuscript Part 8 : Some Notes On Writing Systems.

The Humanist Script
The Chatter Box
More Articles All Articles
About