Payal Joshi
In the days of yore, organic chemistry was considered a branch of science that dealt with endless interactions involving carbon atoms as atomic and molecular interactive forces were not understood. With the obscure determination and blatant optimism of the alchemist predecessors, chemists set their sights on isolating and synthesizing a wide array of compounds; some observed in nature, others dreamt up by their imaginations.

Chemists are particularly drawn to molecules that behave like ferocious cats, reacting rapidly and often violently and hence cannot seem to resist the temptation to control them.

One such species is the carbene which is imperative for an entire framework of organic reactions thereby leading to an altogether a separate branch named----- Carbene Chemistry. On closely observing most of the crucial organic reactions, carbene intermediate species truly intrigue me. In systematic name formation, carbene is the name of the parent hydride :CH2. According to IUPAC terminology, carbenes1 are the electrically neutral species H2C: and its derivatives, in which the carbon is covalently bonded to two univalent groups of any kind or a divalent group and bears two nonbonding electrons, which may be spin-paired (singlet state) or spin-non-paired (triplet state). Methylene is the simplest member of a class of organic molecules known as carbenes, which contain an atom of carbon only bonded to two other atoms, in this case, a pair of hydrogen atoms.

Looking into the history, methylene was the blue-eyed baby of French chemist Jean-Baptiste Dumas in the early 1830s. Driven by scientific curiosity rather than the promise of any practical applications, he observed that other one-carbon molecules, such as methane (principal component of natural gas), carbon dioxide, and toxic carbon monoxide were readily found in nature. It seemed reasonable to expect methylene to be easily synthesized in a lab. Dumas figured he could do this by dehydrating the one-carbon alcohol, methanol, which as you must have realized did not bear fruits.

This led to a procession of chemists trying to isolate methylene and other types of carbenes, such as acyl carbenes, imidolyl carbenes and vinyl carbenes. By the 1960s, a general consensus was etched into the foundation of organic chemistry that:

“Carbenes were too unstable for isolation. While they took part in many reactions, carbenes would forever remain transient intermediates with lifetimes of mere nanoseconds. No one would ever be able to bottle them up and that scientists should stop wasting their careers in such pursuits.” The reason for carbene instability—not known in Dumas’ time—is that their carbon atoms have a rare electronic configuration. Let us revisit this topic: 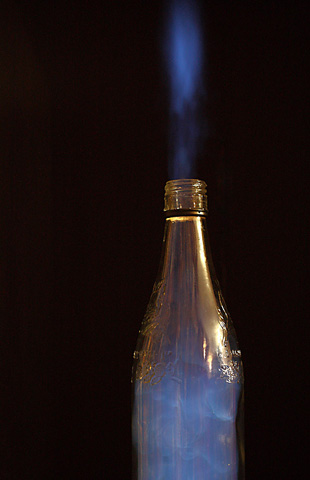 (Remembering the song: Genie in the Bottle)

Anthony Joseph Arduengo III figured out how to stop these elusive molecules from reacting further. Arduengo was working on the commercial production of a catalyst to be used in making environmentally friendly automobile paints.  Considering that the reaction involved a carbene intermediate, he was surprised at how efficiently he was able to produce the catalyst in an industrial setting, under less stringent conditions than would normally be employed in a research lab . This led him to believe that carbenes were much sturdier than previously thought. The type in question, an N-heterocyclic carbene, or NHC, has a ring of two nitrogen atoms and three carbon atoms, one of which has only two bonds. Arduengo thought he could isolate it, but DuPont higher-ups met his inkling with skepticism. Even though he was told to find another research goal, Arduengo went about trying to stabilize the NHC and yes, he succeeded.

A persistent carbene (also known as stable carbene or Arduengo carbene) is a type of carbene demonstrating particular stability. The best-known examples are diaminocarbenes with the general formula (R2N)2C:, where the 'R's are various functional groups. In 1991, more than 150 years after the first attempt, he became the first chemist to successfully crystallize a carbene by placing the two-bonded carbon between the two nitrogen atoms. Electrons from the latter can provide the carbon with the most stability. But Arduengo wasn’t alone in his breakthrough. Three years earlier, French chemist Guy Bertrand had managed to create an oily substance that exhibited carbene-like reactivity through a slightly different approach. Whether he had managed to isolate a “true” carbene, however, was still under dispute. Nevertheless, both Bertrand and Arduengo shook the organic chemistry community to the core and spawned a renaissance in carbene chemistry.

Lavallo and Grubbs2 used carbenes in new organometallic reactions. Bertrand reported the synthesis of a novel type of carbene that was stable at room temperature as both a solid and in solution. “The role of scientists is to challenge the rules which have been established by their predecessors,” Bertrand says. “There are still many families of reactive intermediates, the isolation of which have been impeded by the belief that they are inherently unstable.” But even when in the late 1980s he was hell-bent on proving that carbenes could be stabilized enough to be isolated, he never imagined they would find so many useful applications within just a few years.

Carbenes have since been identified as some of the most powerful organic catalysts. Earlier this year, scientists led by Yugen Zhang at the Institute of Bioengineering and Nanotechnology in Singapore reported the use of N-heterocyclic carbenes to catalyze the transformation of carbon dioxide into methanol. This reaction—highly desirable as it could convert a prevalent greenhouse gas into fuel—is extremely challenging in part because carbon dioxide is so thermodynamically stable and resistant to chemical reactions. This stability is no match for NHCs, however. They form transient bonds with the carbon in CO2, making it more willing to bond with hydrogen ions, eventually resulting in the production of methanol. The catalyst’s stability allowed the reaction to take place under ambient conditions while using air as the source for CO2. It is cheap, renewable, and has low toxicity—a catalytic dream by the standards of environmentally friendly chemistry.

Dumas’ methylene would have remained too unstable for isolation, but this new generation of stable, “bottleable” carbenes has and will continue to push the boundaries of chemical stability further, realizing the vision of more than a century’s worth of chemists.