Tweet
A few short years after NASA got money for the successor to the Hubble telescope, they told Congress that 11 years would not be enough time to build it. They told the public they couldn't put a telescope into space by 2002, even though that was more time than it took to start from nothing and have living breathing humans walk on the moon.

The James Webb Space Telescope is named after the NASA manager who oversaw that moon landing. Were he alive today he'd probably wish they had chosen Gene Kranz for the name instead. He'd certainly be skeptical that modern NASA can do any Big Science. Cute robots on Mars, sure, but not big stuff like this.

It's not new for NASA claims to be the subject of skepticism. The U.S Government Accountability Office (G.A.O.) placed NASA on its High Risk list in 1990, and they never left it.

The reason is as old as government funding; underselling costs while overselling short schedules. 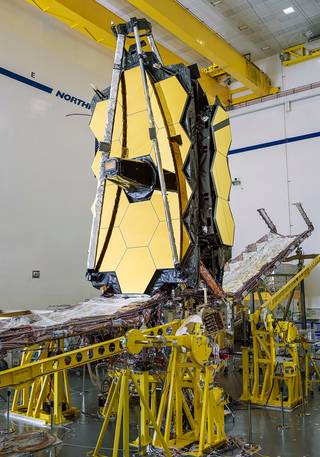 NASA pioneered space travel and right after that they pioneered creating projects that were Too Big To Fail. Meaning government will have dumped so much money we have to lose more to get anything at all. Corporate CEOs know you don't 'throw good money after bad' but most politicians have never worked for companies, and they aren't risking their jobs losing fortunes.

Once upon a time, there was skepticism about this stuff, but now there is only critical thinking about programs begun by the other side. Democrats refuse to not lose their minds about solar and wind mirages, but the Clinton administration happily canceled the Superconducting Supercollider and the Strategic Defense Initiative because they were started by Reagan. President Obama did the same thing to George W. Bush's Constellation program. Yet JWST, started during the Clinton years, somehow survived despite being a boondoggle than all three combined.

The question journalists should be asking is, will it work at all? Hubble didn't work at first, but it was close enough to be easily fixable. NASA will be lucky if this even goes up this year, after 25 years of hearing about it, but if something goes wrong it could take 40 years to get a team there to fix it. And if Republican presidents of the future do what the last two Democracts did and cancel programs just because their predecessors' names are on them, humans will never go into real space again.

I get the benefit if it does work, but go ahead and put me in your Twitter mentions claiming I hate science for being skeptical of government failures stretching back decades, but with all of the missteps and an internal confidence level that never rose above 50 percent it would work, it is time for the science community to shuck off politics and stop embracing centralized authority as the best way to do things. It isn't. It's a challenge to find anything centralized government has done well. But go ahead and try in a comment and I will note how much money it has cost and how a smarter approach would have been better.