Christmas Trees Are The Definition Of Sustainable - Why Do Environmentalists Oppose Them?
By Hank Campbell | December 21st 2022 07:34 AM | Print | E-mail

Tweet
The pandemic must be over because activists are back to complaining about Christmas trees, which means they will also be back to being anti-vaccine as soon as Republicans stop being idiots and it is once again a safe space for progressives to own. Just like every year from 1998 to 2020.

Republicans don't look like they are regaining their sanity any time soon but trees have activists in a panic. Though the US has more open land than the entire continent of Africa 'the land is being gobbled up' is an important part of the fundraising narrative. It isn't working on the generation taking the reins of political and economic power. Millennials, the demographic most jaded by environmental scaremongering their entire lives, are far more likely to buy a tree than Baby Boomers or Gen X - 82% more likely despite the cost being far higher.(1)

Marketing against Christmas may not be working because Millennials discovered that for their entire lives Boomer environmentalists happily lied about science  - 'it takes a gallon of gas to make a pound of beef' et al. - so they are jaded and cynical, which makes them critical thinkers. So they may realize that while a Christmas tree is gained by 'cutting down' a tree it is really a piece of land growing a tree every 9 out of 10 years, which is better for the environment than using it for food farming where it will be used 7 out of 10. Urban activists educated by white Boomer elites want less food at high cost - a world of organic - while Millennials think that Sri Lanka is actually a terrible way to feed people. 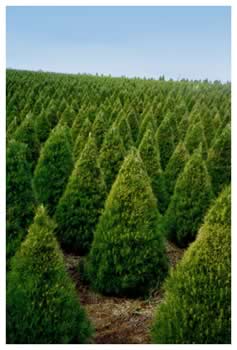 Environmentalists try to suggest ancient Redwoods are being cut down to grow Christmas trees and that is not true.(2) Instead, tree farms promote biodiversity.

Environmentalists are already having a tough year pretending they love Big Pharma and hate Christmas, so let's not give them any more awkward scientific facts - like that burning a tree is far better for the environment than letting it biodegrade naturally.

(1) Artificial trees still dominate, Gen X and Boomers are 135,000,000 in the US, but that even 30,000,000 trees are purchased despite cost 500% more is a sign that as old people die off, the generation having kids will buy even more trees. At least until their kids are grown, then they may switch to artificial.

(2) These are the same groups trying to argue that a non-corporate effort to restore the blight-devastated American chestnut using a very elegant blight-resistant gene naturally occurring in another chestnut is bad because it involves science. If you instead support genetically rescued organisms, leave a comment here.