Tweet
In the new Netflix film "Red Notice", the hijinks for the core of the film revolve around the eggs that Roman General Marc Antony gave Egyptian Queen Cleopatra at their wedding. The history of those two is complex and their relationship has been dissected/speculated beyond what I can do here, but I was fascinated by the three eggs he gave her.

In his Natural History, Pliny the Elder recounts that after one extravagant feast, which the Roman triumvir declared difficult to beat, Cleopatra said she would spend 10,000,000 sesterces on a meal. It's actually hard to convert that to modern money because just like today, the value of goods changed. For example, when a 'home' CD burner first became commercially available, a friend and I created the first computer video sign language program, actual videos that came up when you typed in a word or sentence. The cost of the machine was nearly $5,000 but now you can get one 40X as fast for $20. Thirty years ago it was an extravagant gift, today it would just be as weird as buying a gift from a gas station. When hundreds of years later Diocletian tried to solve the silver coin dilution problem with socialism, using the state to create prices, those were posted so we have some reference. A liter of olive oil was 2 sesterces while a liter of beer was 32. Beer does not cost 16X as much as olive oil now, it costs much less.

Those prices seem crazy to us, just like a $5,000 1X CD burner and the solution then, as now, was lurching back to the free market, but they also switched to gold, which could not be diluted without it being obvious. Using gold, as the Romans finally did, allowed scholar Berthold Louis Ullman to write in a 1957 The Classical Journal article that the value was probably around $500,000 in 1950s money.

Unless you are some guy in Nederlands sprinkling gold flakes on a hamburger it's hard to imagine realistically spending that much on a meal, but we are told Cleopatra had a plan. At the end of the first course, Cleopatra had a single bowl delivered. She took off her pearl earring, considered the most valuable in the world, and dropped it in the bowl. The pearl dissolved in vinegar, and she drank it. She won the bet, we are told, but like her eggs, this seems to be a story.

Yet it is a famous enough story that the 1940s equivalent of organic food shoppers were buying stomach products using the story.  Udga claimed its proprietary formula did just about everything and that may be why Cleopatra not only drank pearls, she did it even if she had a stomach ulcer.(1) 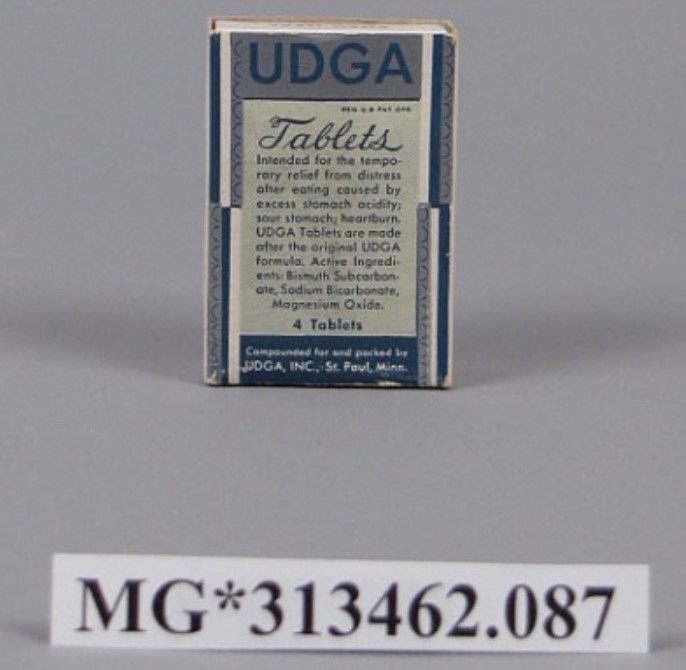 Pearls are mostly calcium carbonate so their value was in the difficulty obtaining them - much like elites only want salmon they know was caught in dangerous conditions by laborers on the ocean, never farmed. 'Carbonate of lime' was an ancient 'antacid' and if ancient people knew about the composition of pearls it could have been an Alka-Seltzer for the truly wealthy. But the vinegar couldn't have worked without it dissolving her stomach minutes later. If they were crushing up pearls for medicinal benefit, they put them in wine.

Cleopatra was the wealthiest person in the Mediterranean so she likely had the best pearls, and a story about her being so rich she could waste one to win a bet is definitely on brand, but when it comes to the science, we just can't stomach it. Like her Wedding Eggs, where we'd get to run off with Wonder Woman, Hobbs, and Deadpool in a National Treasure Ocean's Eleven Indiana Jones movie, it's only a story.

(1) It didn't help prevent their own stomach issues. They were found in violation of FDA and FTC rules on a few occasions. Think hucksters like the osteopath Joe Mercola in modern times. Only his fines are much larger.