Tweet
The Nobel Prize in Physiology or Medicine 2019 has been awarded to William G. Kaelin Jr., Sir Peter J. Ratcliffe, and Gregg L. Semenza for their discoveries of how cells sense and adapt to oxygen availability.

Animals use to convert food into useful energy. Mitochondria in our cells take fat, sugar, and protein and 'burn' it into ATP, a common currency our muscles and organs use.
But how cells adapt to changes in levels of oxygen has long been unknown.

Kaelin, Ratcliffe, and Semenza discovered how cells can sense and adapt to changing oxygen availability. They identified molecular machinery that regulates the activity of genes in response to varying levels of oxygen. They established the basis for our understanding of how oxygen levels affect cellular metabolism and physiological function. Their discoveries have also paved the way for promising new strategies to fight anemia, cancer and many other diseases. 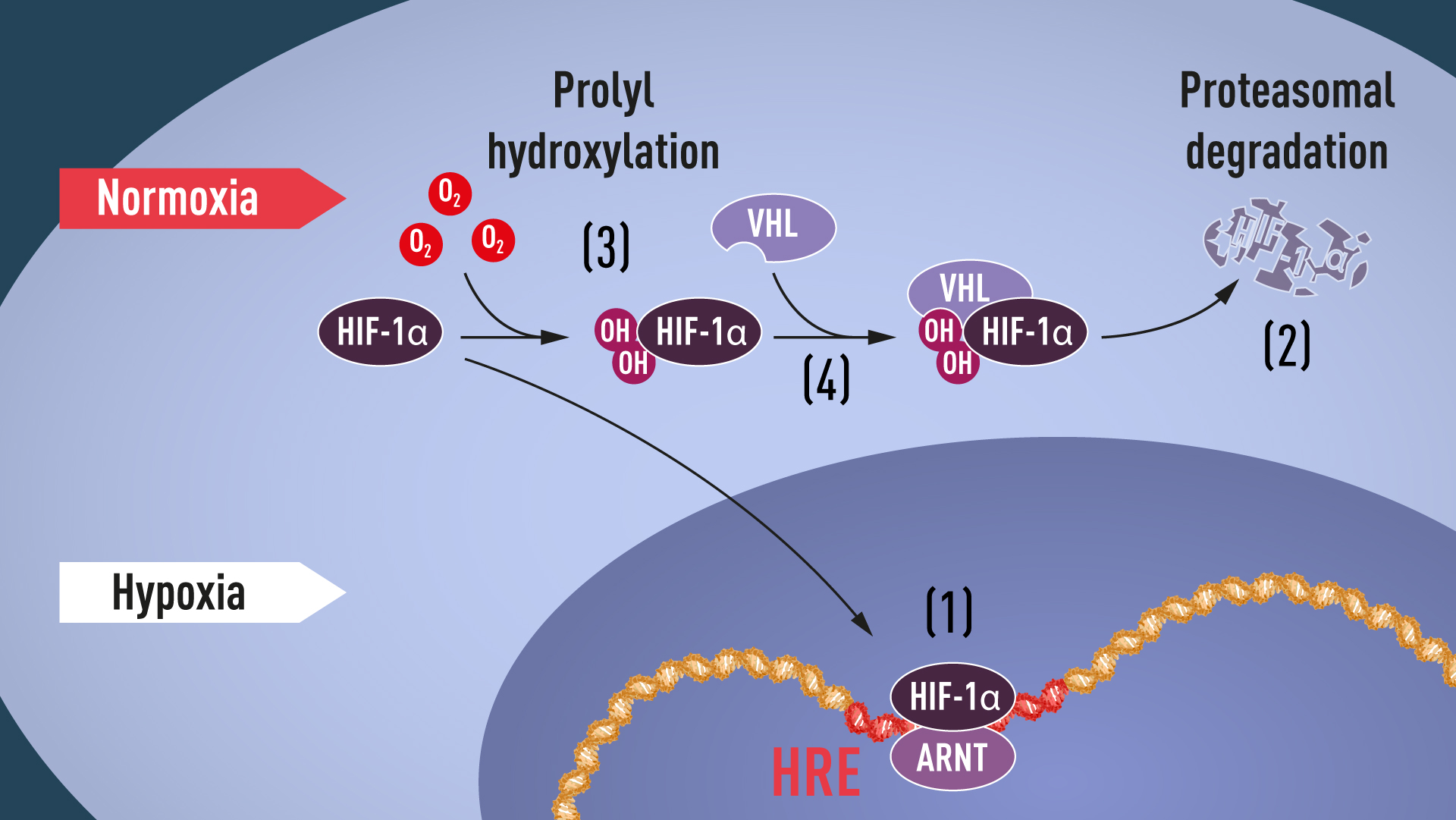 When oxygen levels are low (hypoxia), HIF-1α is protected from degradation and accumulates in the nucleus, where it associates with ARNT and binds to specific DNA sequences (HRE) in hypoxia-regulated genes (1). At normal oxygen levels, HIF-1α is rapidly degraded by the proteasome (2). Oxygen regulates the degradation process by the addition of hydroxyl groups (OH) to HIF-1α (3). The VHL protein can then recognize and form a complex with HIF-1α leading to its degradation in an oxygen-dependent manner (4).

Oxygen sensing is central to a large number of diseases. For example, patients with chronic renal failure often suffer from severe anemia due to decreased hormone erythropoietin (EPO) expression. EPO is produced by cells in the kidney and is essential for controlling the formation of red blood cells, as explained above. Moreover, the oxygen-regulated machinery has an important role in cancer. In tumors, the oxygen-regulated machinery is utilized to stimulate blood vessel formation and reshape metabolism for effective proliferation of cancer cells.

Intense ongoing efforts in academic laboratories and pharmaceutical companies are now focused on developing drugs that can interfere with different disease states by either activating, or blocking, the oxygen-sensing machinery.

Oxygen sensing allows cells to adapt their metabolism to low oxygen levels: for example, in our muscles during intense exercise. Other examples of adaptive processes controlled by oxygen sensing include the generation of new blood vessels and the production of red blood cells. Our immune system and many other physiological functions are also fine-tuned by the O2-sensing machinery. Oxygen sensing has even been shown to be essential during fetal development for controlling normal blood vessel formation and placenta development.