Tweet
On this date in 1939 Marvel Comics #1 was on newsstands, featuring Human Torch and Namor the Sub-Mariner (he was Aquaman before Aquaman.)

So why does the cover say October? Comic books did what magazines did (and do), and instead of a publication date they put a pull-date on the cover, which would be the date the issue was to be removed and returned to make way for the new issue on newsstands. There was no direct sales then, like dedicated comic book stores are now, you went to the rack in a store or on the street and purchased them. So on that Tuesday in 1939 while Germany was about to wrap up its takeover of Poland, and the USSR was about to take its cut, this comic appeared.

But the company was not Marvel then, it was Timely, and 1939 was also the year that publisher Martin Goodman hired his wife's cousin Stanley Lieber as an assistant. Lieber was young but enthusiastic and wanted to write, his first published credit was a Captain America story (no art, just text) yet when Joe Simon, Timely editor and co-creator of Captain America, left the company Goodman gave Lieber the job. Lieber had been writing under a pseudonym, Stan Lee, and continued to use it. 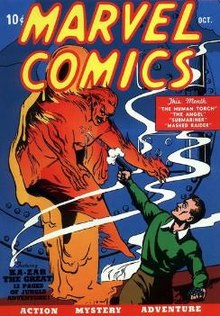 Things were never easy at the company. Artists were often only doing it until they could get real jobs they wanted, like in advertising, and the writing was dismissed as kid's stuff, so much so that when Congress held hearings about violent content in comics, it sent the industry in a tailspin, where they agreed to self-censorship, but parents were against them just the same. Comics began to fade. Even Captain America, a "Commie-Shasher" now that Nazis were gone, went out of circulation. Romance and westerns and non-scary monsters were the rage.

By 1961 the company, now no longer Atlas but under a new Marvel name, had been floundering under the weight of too many "me too" books that were just copies of things other companies did, and Lee worried for his job. His wife suggested he write the book he always wanted to write as a last gasp so he did - called the Fantastic Four. He even resuscitated the Human Torch from Marvel Comics #1. 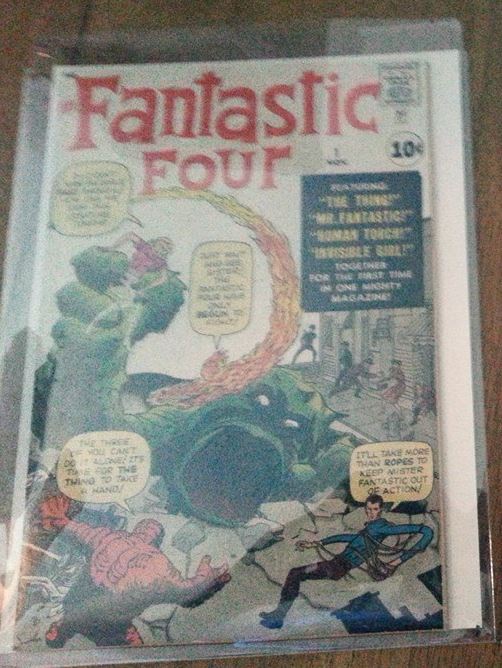 My copy of Fantastic Four #1.

It was timely, pardon the pun. Superheroes had been making a comeback at DC and Goodman was always following trends rather than creating them, but Lee did something different. He made them part of the real world; New York, not Metropolis or Gotham or Star City. Whereas Superman never had politics, the Fantastic Four were racing to space to beat the communists.

As Mike Benton phrased it in 1991's Superhero Comics of the Silver Age: The Illustrated History;

From 1962 to 1965, there were more communists [in Marvel Comics] than on the subscription list of Pravda. Communist agents attack Ant-Man in his laboratory, red henchmen jump the Fantastic Four on the moon, and Viet Cong guerrillas take potshots at Iron Man.

They fought amongst each other, like real families. It was a hit, but not just among kids, it also became a fad with college students.

Goodman had a knack for avoiding disaster - he and his wife couldn't get seats together on the Hindenburg so they took a plane instead - and it had happened again. The new formula worked, but the internal drama did not stop. Goodman, at times, had nearly 60 shell companies, and in 1968 sold out to Perfect Film  &  Chemical Corporation but remained Publisher until he was forced out in 1972. He immediately created a competitor, called Atlas, after the 1950s version of his company, but it died within a year. He even hired Lee's brother as editor.

Marvel, under its new owners, kept up its old ways, so they were willing to sell TV and movie licenses to anyone whose check would clear. By the time they got financing to do their own films this century, after the success of Sony's 2002 "Spider-Man" film, they had already sold off their most valuable characters. The Fantastic Four, X-Men, Hulk, etc.

All they had left were second-rate characters, like Iron Man. And Captain America. And Thor. And the rest of what would turn out to be "The Avengers" and they created a franchise that would go on to set a record this year for highest gross revenue of all time.

But that all started with Marvel Comics #1, 80 years ago. So happy birthday!