Tweet
Just five short years ago, there was no real market leader in e-cigarettes, it was a grassroots solution for smokers who wanted harm reduction and smoking cessation and didn't like Big Pharma. Patches and gums certainly did not work very well and the wisdom of crowds invented something better. It was a tiny fraction of the tobacco market, but growing to where FDA wanted to regulate it.

Now JUUL is the unquestioned leader, a $2 billion a year brand. But there was always a détente around the company. Former smokers don't trust Big Tobacco and JUUL very much wanted to be a big tobacco company. And while we all recognize that kids will experiment and kids will rebel - and it is far better if they experiment and rebel with nicotine than with cigarettes - the hammer would come down if anyone large tried to exploit kids. (1)

And that seems to be the problem JUUL now faces in its favorability ranking, where of 3,695 brands tracked by Morning Consult Brand Intelligence, 1,900 in the U.S., they are now only hated less than, ironically, Marlboro. Marlboro, owned by Altria, the same Altria that just bought a stake in JUUL for $13 billion.

The drop in favorability is most severe in the very group that should be their core market; 18 to 21-year-olds. Instead, they plummeted 27 points in the last month. 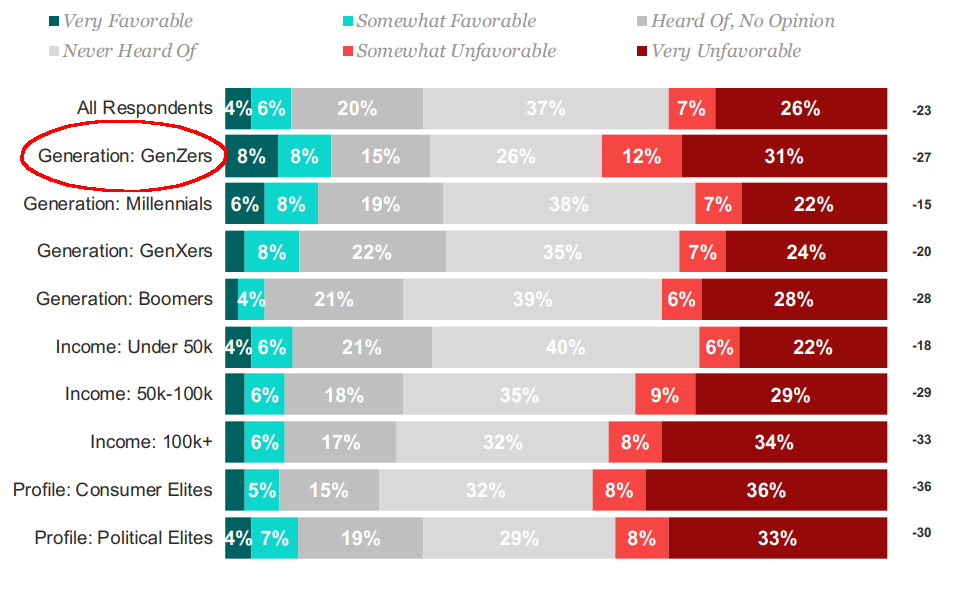 Lots of things are a pediatric disease - smoking, alcohol, Pokemon, etc. Statistically you don't find a lot of people taking any of those up at 25. A lot of brands seek young people to get customers for life. However, Coca-Cola, Red Bull, and Pepsi don't go into schools talking about how they are healthier than each other. But talking in schools about how safe they are is not endemic to the JUUL company.  And they are being punished for success by officials who like nanny government - but they have become easy to dislike because they reek arrogance in their attitude toward concerned people. Taking a giant check from Altria hurt them a lot in the smoking cessation and harm reduction communities.

Perception rules. Their drop in favorability is a bad thing for the future because despite what clueless people contend, all press is not good press. JUUL had already removed a lot of flavored products from stores a year ago but the administration saying they want those gone makes it look like it's in response to JUUL.  It's the kind of hyperbole we have come to expect from government; four flavored products is deemed possession "with the intent to sell" punishable by 6 months in jail.

And the Altria relationship looks bad but that company can't lose. If JUUL gets hammered, maybe more people will keep smoking. Maybe kids will take up cigarettes instead, without Altria marketing to them at all. Some kids do dumb things. It was hard to turn down that much money but JUUL knew what it would do to their brand.

What may help both companies; supporting an increase in age to 21, as it is for alcohol. We've had that for 33 years and the arguments about the military are the same, as are the arguments about people being able to vote, but let's be honest; we've created a culture where the age demographic that won World War II and put people on the moon is now not even considered mature enough to be off their mommy's health insurance, so it is hard to argue that cigarettes and nicotine products shouldn't be limited to 5 years before that.

(1) Yes, bad people would occasionally buy a 50-gallon drum of nicotine juice and set it up near a school but that didn't make the entire industry look bad, the way company reps going into schools and talking about their products do. And did.