Tweet
The pandemic of 2020 caused a lot of people to rethink science beliefs that were more luxury than reality. Did you want your family protected by some stuff that claimed to be organic and natural or did you want Clorox, Lysol, and Purell that actually worked? Did you want Peruvian tree bark sold by Chris Cuomo and his wife or a COVID-19 vaccine?

Hopefully this will impact policy in other areas. For example, since the 1990s, California has had the luxury of 'defining air pollution down.' The standard for what constituted pollution got more Puritanical as the air got cleaner, despite any evidence anyone new was being helped. With real smog gone in all but one location, California Air Resources Board gave itself a reason to continue to exist by pivoting from smog, PM10, down to virtual pollution, PM2.5 - particulate matter so small you need an electron microscope to see it - and claimed it was killing people.

Using a standard for air quality nature exceeds routinely, maps could still be yellow or red and activist politicians could talk about how terrible cars and manufacturing jobs are. That is not science and never was, and proof was always there in the one place that still needed improvement after California's arbitrary (yet allowed under federal law thanks to a special political exemption by EPA) was Los Angeles.

The air problems in Los Angeles are due to nature.

Given its geology, the only thing that is going to improve air quality in that basin is everyone leaving. Which is not going to happen unless Colorado stops sending its water. Activists were able to claim it was EPA emissions standards for cars because they gathered epidemiologists who can correlate anything to anything - if you replace data with statistics, science need not be on the agenda.

Actual smog on our continent, not the virtual kind - PM2.5

To create policy you only need correlation, and so they found epidemiologists who believe that biologists, chemists, and toxicologists simply have not discovered how the cause and effect is occurring. Disregarding science reality, California politicians armed with epidemiological position papers demanded that poor people be penalized with costly emissions standards that made cars even more expensive. They increased the cost for new ones while used cars in nearly 40 other states couldn't be sold in their borders.

Yet again, higher costs for Californians made no difference in the only place where it needed to make a difference - LA. It turns out that Los Angeles remained ill-suited to have as many people as it has and the ozone everyone said needed to be gone in the 1980s is still there.

It's due to nature as much as anything. California has heat waves and banning cans of hair spray dldn't stop that.

In all, this year there were 157 bad air days for ozone pollution — the invisible, lung-searing gas in smog — across the vast, coast-to-mountains basin ... That’s the most days above the federal health standard since 1997.

This was with the city shut down in the pandemic and far fewer cars on streets. 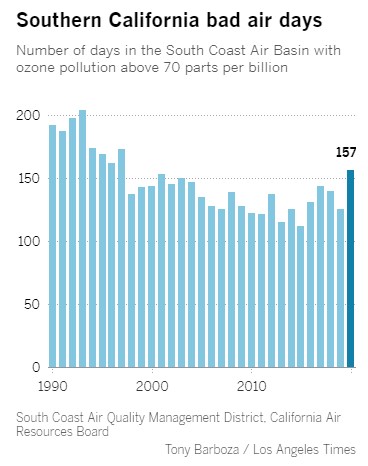 Because you can create correlation arrows and "suggest" causation but you can't make it science. Yet activists simply pivoted. They insisted that the air quality was due to more people using disinfectants during the pandemic.

The reality is that LA has not met an ozone standard set 40 years ago because the things they insisted caused the problem there were not the problem. Nature is. Continuing to penalize poor people by making them overpay for cars has not helped and never will.