Tweet
In 2010, physicists reported an exceptionally precise measurement of the size of the proton, the positively charged building block of atomic nuclei, using special hydrogen atoms in which the electron that normally orbits the proton was replaced by a muon, a particle that’s identical to the electron but 207 times heavier.

They found the muon-orbited protons to be 0.84 femtometers in radius — 4% smaller than those in regular hydrogen, according to the average of more than two dozen earlier measurements. Which would mean protons really shrink in the presence of muons due to unknown physical interactions between protons and muons.

Hundreds of papers speculated about the possibilities.

But as Natalie Wolchover notes in Quanta, hopes that the “proton radius puzzle” would upend particle physics and reveal new laws of nature have now been dashed by more accurate measurements of the Lamb shift in muonic hydrogen published in Science. 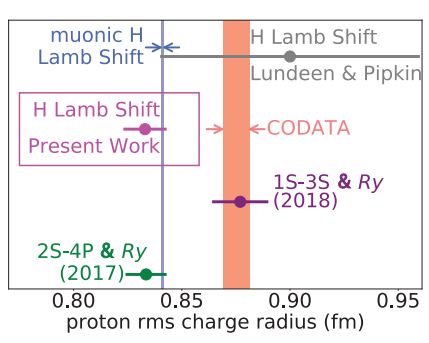