Tweet
If you take a hanger and place it around your head, your head is likely to turn. This was studied in 1991 and 2015 for the same reason we sometimes put shrimp on treadmills - because we can. And also because it is a mystery of neuroscience.

How many people does this work on? About 96 percent. It got attention again this week when Dr. David Schoppik, a researcher of balance (using fish as an animal model) talked about it on Twitter, which led to a bunch of people on TikTok trying it, and then here in my home.

My son had no idea what I was up to when I asked him to put a hanger on his head and, let's be honest, he is not surprised by anything I request in the name of science by age 17, so he did it and...nothing. I asked him if he felt any need to turn his head and he, in his genetically inherited way, sarcastically noted that he was not resisting a desire to turn his head. But then he tried it again and started to laugh in surprise when he realized he had been trying to keep his head from turning, because the camera was on and he knew I needed to film something.

But I had shut the camera off by the second try, since it seemed to have not worked. Happily, I at least have footage of him which he can show to his grandkids and they can ask questions like, 'Why do you have so much hair a hanger won't stay on your head?' and 'Why are you wearing a Christmas shirt in May?'

But those are mysteries science will never be able to solve. 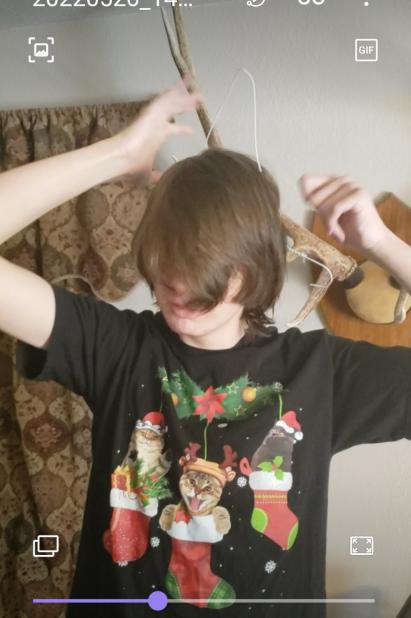