Kim Wombles
Recently, I reviewed Simon Baron-Cohen's new book, The Science of Evil, and interviewed him concerning zero empathy, neurological disorders like autism spectrum disorders and personality disorders like narcissism, borderline, and psychopathy. The New York Times interviewed Baron-Cohen this week in a piece titled "From Hitler to Mother Theresa: Six Degrees of Empathy." The article links to a 60 item empathy quotient test online (20 are filler items); the test in the book contains only the 40 empathy questions.

Last year, I wrote about Baron-Cohen's empathy and systemizing tests and how he believes they explain autism spectrum disorders. In the literature that supports his empathy-quotient test, the scores for the autistic subjects seem to disagree with Baron-Cohen's contentions that autism spectrum disorders are zero-empathy disorders. According to Baron-Cohen and Wheelwright, the autistic subjects did not score at zero empathy, but instead lower, at around 20. Even in the test at the end of his new book, the EQ provided does not provide the 0-5 scaling that Baron-Cohen posits in the book. Instead low is from 0-32. In our interview, Baron-Cohen made clear that while he'd labeled ASDs as zero-empathy disorders, not all would actually score 0.

This is muddy water, to put it mildly, and with various people defining empathy differently, it can get even muddier.

I suspect, based on comments I've read, that many in the autism community will question the validity of the questions measuring empathy in this EQ measure, and part of that will be based on the definition. I think this is a fair and important argument to be had, as we work out what it means to be empathetic.


And now, to last year's post on this topic, which also includes systemizing.


We are driven (some of us more than others) to identify, classify, and organize. According to Baron-Cohen, individuals on the spectrum are extreme systemizers (with deficits in empathizing). He explains this theory for the layperson in his 2008 book Autism and Asperger Syndrome (which I reviewed here), known as the empathizing-systemizing theory. This theory is a blend of both his earlier theory of mind and later extreme male brain theory. Baron-Cohen posits that this theory explains more the of the symptoms, behaviors, and differences than do the other modern psychological theories that have been proposed as explanations for autism spectrum conditions (Baron-Cohen prefers conditions to disorder).


It's possible, though, to score extremely high on systemizing (as I did when took it 14 months ago--112) and above average on the empathizing (65). Because my empathizing abilities are intact, there is no social or communicative deficit. According to the website EQSQ, the average scores for SQ for men is 61.2 and 51.7 for females. My score of 112 puts me on the extreme  systemizing end, even though my score of 65 for EQ is well above average for both males (39.0) and females (48.0).


If readers haven't run across the tests, they can be found at EQSQ. Also available on this website are four research articles on this theory.


Did my results surprise me a year ago? No, not really, nor was I surprised tonight, when I retook it and had essentially the same score (with both coming in just slightly higher than a year ago). There is a broader autism phenotype (BAP), where the traits that are seen in the autism spectrum conditions are seen in family members to a lesser degree. In other words, to follow up on my post from yesterday, I'm BAPpy, which I've known for years, and so is my husband and my other family members. For several reasons, I'm sure having to do with difficult pregnancies and births and with genetics (in other words, a mix of genetics and environment), my three children are on the spectrum. My oldest is much more significantly impaired and has accompanying ID (from stroke damage). He'll always need assistance and a sheltered environment. My youngest is closer on the spectrum to him, but has no ID. My middle child has Asperger's and at times appears merely BAPpy, until a meltdown or the over-literal thinking, or any of a number of traits show they go beyond quirks to areas that need real assistance and accommodation. These become more obvious as she gets older, and her need for assistance will grow as she becomes more obviously different. Bright only gets you so far; she's bright enough to work on work-arounds, but the demands of school and the social skills involved will become harder for her to navigate. I've been there, though, in lesser BAPpy glory, and will help her to navigate the social worlds she finds herself in, just as I have helped her brother and will help her sister. That's my job. Organizing what I know and don't know about my children and about autism helps me do that job better. Because I try to be open, those categories are not permanent categories, but act as placeholders. People cannot, for all that we like to pidgeonhole them, be contained into neat boxes. Okay, if you're Dexter you could probably do that, but in all seriousness, people are complex and do not fit into neat DSM categories (and I hope we never do).


There's immense satisfaction in classification. I'm organized. Highly, obviously. I like to know where things are, where they belong, why they work the way they do. And when I am provided a mystery, as my garden often does, I want to classify. Sometimes I must wait months, until I've accumulated enough data, or a plant has given me enough to work with to find what I need. Today, I am satisfied. I have identified several mystery plants that were obviously intentional (in that I have lots of them, so they must have come from wildflower mixes -- or overzealous birds' droppings in clusters). 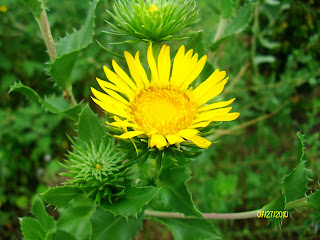 The first is one that I only have in the back garden. Before I'd thinned them, I must have had over a 100 of them, and considering many are now taller and wider than me (not hard on the tall part, but a bit of a stretch on the growth side), it's probably a good thing that I did thin the saw leaf daisies. It's a beauty, though, and worth the several months wait. I do believe I like it near as well as I do my sunflowers. I love yellow. So pretty, so energetic. 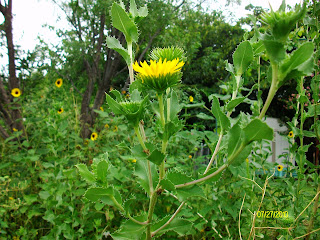 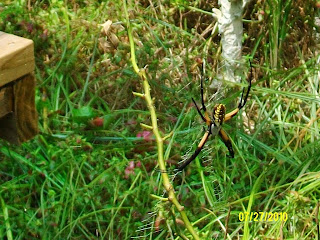 This gorgeous spider, a yellow and black garden spider, enchanted me. 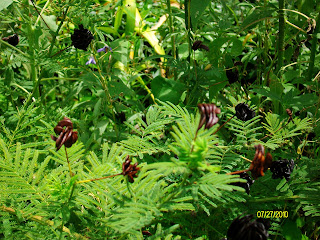 As has this wild rhubarb. (far left of the hollyhocks)

And last, the partridge pea!


Countering
More Articles All Articles
About