Well, according to a new study, blame the micro RNAs (miRNAs) linked to the X chromosome. The study, published in  BioEssays, investigated the observation that women live longer than males and are more able to fight off shock episodes of sepsis, infection or trauma. Thus, the researchers from Ghent University, Belgium, decided to take a look at the X chromosome and the miRNAs linked to it.

Micro RNAs are small bits of ribonucleic acid (RNA) that are found in the vast majority of eukaryotic cells. These tiny bits of RNA are post-transcriptional regulators that bind a specific target sequence, resulting in changes in gene expression. In the human genome, the X chromosome contains almost 10% of all miRNAs detected so far. The role of many of these is yet a mystery, but some are known to play their part in immunity and cancer.

After comparing the miRNAs in the human and mouse X chromosome (see figure 1), the researchers hypothesize that:

… X-linked miRNAs may contribute to the immunological advantage of females. ... We also highlight the ones which have a known role in both immune functions and cancer, and speculate that silencing escape and X-inactivation skewing, which are known mechanisms affecting X-linked genes, possibly influence X-linked miRNAs to the same extent.

Basically, because females have two X-chromosomes, immunity-related genes on it that are silenced, have a back-up. Males don’t have such a back-up, as they have only one X chromosome. 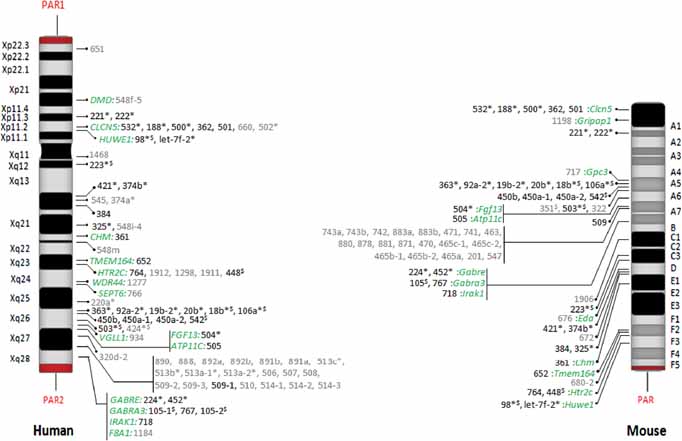 Figure 1: Map of the miRNAs on the human and mouse X chromosome. Black means present in both species, gray means species-specific.

The role of miRNAs as immunomodulators is an emerging research field, where much has still to be done. Fine-tuning of protein expression is essential for maintaining homeostasis and for correct development and cellular function, and it is clear by recent advances in miRNA research, that minimal perturbations in miRNA-mediated regulation can have serious consequences. Thus, we believe that miRNAs on the X chromosome, because they are present in a particular genomic context, may influence sex specific responses. The myriad of functions and targets of miRNAs has obvious implications in the development of effective therapeutic strategies for cancer and immunity, and is likely to represent a challenge for researchers of both fields in the coming years.