We all remember the earthquake and ensuing tsunami that hit Japan (see figure 1) and caused major troubles in the Fukushima nuclear power plant, which was severely damaged. Problems with containing radiation followed, leading to the pumping of huge amounts of seawater into the reactor, in an attempt to cool it down. 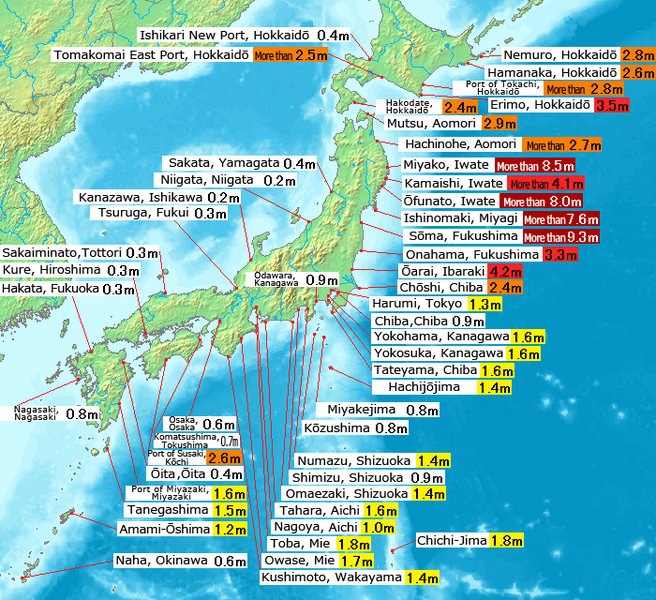 The question on many people’s minds was: how much radiation was released?

Recently, a team of researchers at the University of California, San Diego, has released the first quantitative measurements of the amount of radiation that leaked from the damaged reactor. Their estimate is based on signals that were sent across the Pacific Ocean after seawater was used to cool the reactor. On March 28th, 15 days after the seawater pumping began, the team measured a great peak in radioactive sulfur in the air in La Jolla.

When fuel rods melt, they leak neutrons and other products. These neutrons knocked protons out of the core of the chloride ions in the seawater, resulting in a radioactive form of sulfur. As the water hit the reactor, it almost completely vaporized. This steam, including the radioactive sulfur, was released through vents to prevent an explosion. In the air, this sulfur reacted with oxygen to form sulfur dioxide gas and then, sulfate particles, all carried over the Pacific through westerly winds, eventually reaching a measuring device at the end of Scripps Pier in California.

Using models, the research team traced back the path of the particles (see figure 2) and subsequently calculated how much radiation must have been released. The estimate is that 400 billion neutrons were released per square meter surface of the cooling pools, during the first week of pumping operations.

Figure 2: Radioactive sulfur can be traced back to the Fukushima reactor based on NOAA data.

The trace levels that reached California were never a health risk.

Even though cosmic radiation can also produce radioactive sulfur, it is very unlikely that this disturbed the measurements, since this rarely mixes down into the layer of air just above the ocean, where the measurements were taken.

Besides estimating the amount of radiation released, this radioactive sulfur can be used for other inquiries as well. The nuclear reaction marked the sulfur to a specific time and place, and as such, it can be used to measure all kinds of processes, for example, the transformation to sulfur dioxide and sulfate, and their transport across the ocean, but also tracing it through the streams and soil of Japan, which might lead to a better understanding of how this element cycles through the environment. Work like this is already being performed by the research group.

Priyadarshi, A.; Dominguez, G. and Thiemens, M.H. (2011). Evidence of neutron leakage at the Fukushima nuclear plant from measurements of radioactive 35S in California. Proceedings of the National Academy of Sciences. Published online before print, August 15. doi:10.1073/pnas.1109449108.