Sex is costly. Yet it is widespread throughout the animal kingdom, so there must be some advantages to it. And still, it seems easier to list disadvantages. Sexual reproduction is complicated, requires more time and uses more energy than its asexual counterpart. Partners have to find each other and coordinate their activities to produce the next generation. Another problem is the so-called ‘cost of meiosis’, meaning that, in sexual reproduction, only half of the genome is passed on. Compared to an asexually producing individual which passes on its entire genome, this is a high cost indeed. Another cost is the production of males that will not all succeed in reproducing, and thus waste resources.

So, the costs are substantial. How are they offset? There are several ideas about the answer, most of which are focused around the production of genetic variation. One popular possible answer, is the 'red queen hypothesis'. This hypothesis states that, due to the genetic variation that arises through sexual reproduction, the offspring of sexually reproducing organisms will be more able to deal with parasites. These parasites, in turn, will co-evolve with their host organisms, resulting in an ‘evolutionary race’ between both species, which will have to run (evolve) as fast as they can just to stay in the same place. (Hence the name of the hypothesis, after the eponymous character in Lewis Carroll’s Through The Looking Glass, that said: “It takes all the running you can do, to stay in the same place", see figure 1.)

Figure 1: The red queen and Alice, from Lewis Carroll's Through The Looking Glass.

Now, a research team at Indiana University has tested this hypothesis with laboratory populations of the popular microscopic roundworm Caenorhabditis elegans (see figure 2) and a pathogenic bacteria, named Serratia macrescens. With these two organisms, the researchers generated a host-parasite co-evolutionary system in a controlled environment. The populations of the roundworm were engineered to exhibit sexual reproduction, asexual reproduction, or a mix of both. These populations were subsequently exposed to the parasite, which was either allowed to co-evolve, or prevented to do so. 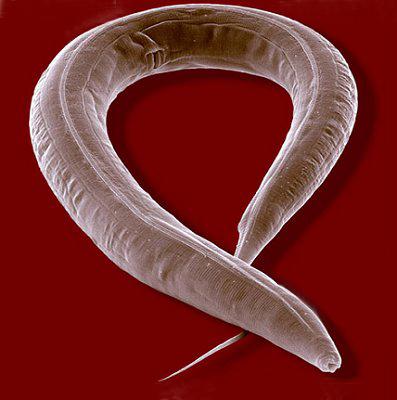 The results show that: