Alex "Sandy" Antunes
"A podcaster, an editor, a policy wonk and a NASA engineer walk into a bar..."  At the DCSWA workshop, regional media talents attempted to answer the unanswerable: what is the future of science writing and science journalism?

Deborah Ager (of Bolt and also ClickWisdom), noted, without irony, that "in 2011, everyone is a newspaper (or thinks they are)".

One person who is a newspaper (or is close enough he is allowed to think he is) is prominant blogger Bora Zivkovic (@BoraZ).  Unfortunately, he notes you can't be like him anymore.  "It's getting harder... I was one of the earlier ones."  On the future and who pays, "if I knew that, I'd be a billionaire".

Darlene Cavalier (of ScienceforCitizens.net) on audiences: "[we think we're educating people but] we're just entertaining people."  She adds, regarding her alter ego as the ScienceCheerleader,"it isn't for people who read Discover magazine, it's for people who wouldn't be reading Discover magazine".  Although she does note "more than 50 current cheerleaders in the NFL are pursuing science degrees."

John Rennie (@tvrennie) had many insights in his plenary talk, noting that in current science journalism "what we're doing is very convenient-- someone hands us stories and we report on them.  Not much leg work, we're not being annoying..."

He adds that it's always bugged him that you can predict the Friday science headlines by looking at the crop of embargoed press releases.  If we're just doing a press release, he argues, they don't need us.  "If we are interchangeable, we are replaceable."

Put another way, "if our stories are commodities, then they will go the lowest price possible, which may be zero."

On the up side, "Competition with internet blogs could stir science journalism in traditional media to correct systematic faults in science reporting".  His clearest suggestion?  "Treat science as a process we're covering, and not just a result."

It is important to remember some basic rules of media have not been through out the window.  Most salient of these was raised by Laureen Modeen (of Govloop) -- "we're all human beings having a human experience using technology."  Connect with that, and you are useful.

Still, the best insight from the whole affair?  In wondering about what direction science journalism should take, we noted that in the field of sports, the bestselling magazine is not 'Sports Illustrated' so much as it is "the Sports Illustrated Swimsuit issue."  And what's the science equivalent of the swimsuit issue?  Nancy McGuire was quick and to the point: "Shark Week". 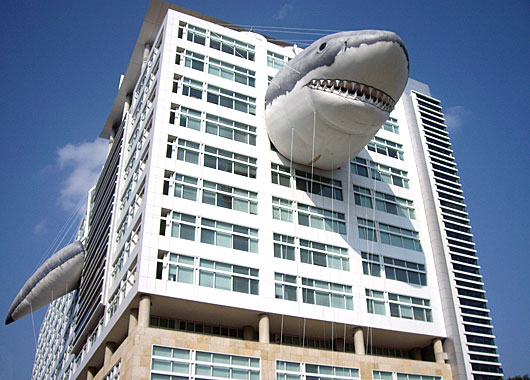