Alex "Sandy" Antunes
We scientists have a desperate need to make our science interesting to everyone-- including ourselves. Our terminology reflects this. In astronomy, we have the Big Bang. In comp sci, computers Crash. In engienering, "Test to Destruction".

But at some point, usually when I'm in a classroom, my science audience wants me to do something extreme. Mix chemicals until they explode. Shatter a rose in liquid nitrogen. Fire off a rocket. Something 'kinetic', in the sense of lots of fragments of something once whole being rent a'sunder.

As usual, parody best covers the dilemma, as with this week's "The Onion" science headline: Science Channel Refuses To Dumb Down Science Any Further.

Frustrated by continued demands from viewers for more awesome and extreme programming, Science Channel president Clark Bunting told reporters Tuesday that his cable network was "completely incapable" of watering down science any further than it already had. [...] "At this point, having the word 'how' in a show's title is about as close to scientific investigation as we get,"

But is blowing things up science? I maintain that the act of blowing something up is mere engineering. It's what you do after the *BOOM* that matters.

I'm going to resolve this once and for all, using a highly technical flowchart. 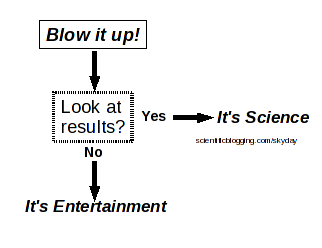 
Tues and Fri here, via RSS feed, and twitter @skyday
Read about my own private space venture in The Satellite Diaries
The Daytime Astronomer
More Articles All Articles
About