Erin Richards
Physicians have known for years that there exists a link between cardiac surgery and a subsequent decline in cognitive function of patients.  According to recent research, “previous studies have reported an 11% to 75% incidence of postoperative cognitive decline among cardiac surgery patients” (Slater et. al). However, until recently, the cause for this link was largely unknown.  Coronary Artery Bypass Grafting (CABG) surgery, continues to produce clinical results demonstrating cognitive decline in some patients despite improved surgery practices. 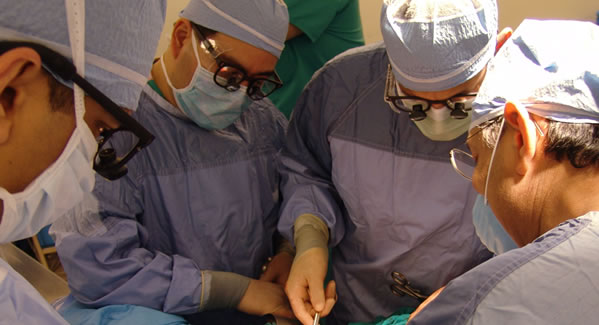 Doctors performing a Coronary Artery Bypass Graft (GABG) on a patient. Patients undergoing this procedure are at risk to developing cognitive decline if their oxygen saturation drops too long or too sharply below the baseline level (50% saturation.) Photo credit: University of Texas Medical School at Houston, Cardiothoracic and Vascular Surgery

Research done by Dr. James Slater and colleagues have shed light upon this causality in their paper published in the January 2009 issue of the Annals of Thoracic Surgery. Their research findings show that decreased oxygen levels to parts of the brain during cardiac surgeries are responsible for the cognitive decline seen in patients following their operations.

Slater and his team studied 240 patients who underwent cardiac surgery, and monitored by the INVOS (In-Vivo Optical Spectroscopy) Cerebral/Somatic Oximeter which is an FDA approved patient monitor that measures changes in oxygen levels beneath its sensor. This was positioned to measure regional oxygen saturation levels in the brain. The sample size was then split into two groups: one group served as the control, with no interference of oxygen, and the other group as the intervention group which received increased oxygen when oxygen dropped below 50% saturation.

This research study also examined the relationship between decreased oxygen saturation during surgery and length of patient hospital stay after their surgery. They found that “cerebral oxygen desaturation was also significantly associated with prolonged length of stay” (Slater et. al). This relationship couched with the negative outcomes realized by cognitive decline could help justify added costs of the INVOS Cerebral/Somatic Oximeter used during surgery.

Slater’s research has illuminated a previously unknown causality, that decreased oxygen levels in the brain for prolonged periods of time can cause subsequent cognitive decline. This not only uncovers a part of human physiology, but causes us to look at the body as a whole instead of the sum of its parts.