Marine Microecosystem: Shedding Light On The Base Of The Food Chain
By Erin Richards | December 18th 2008 07:27 AM | Print | E-mail

Erin Richards
Effects of climate change and global warming, although currently shrouded in mystery may soon be more clearly explained thanks to a new microbial ecosystem model built by researchers at MIT.

The study is based on microscopic ‘planktonic’ marine organisms, so small that 500,000 of them could fit on the head of a pin. The MIT ecosystem, smaller than a stick of chewing gum, is the first ecosystem model to show how microscopic plankton live and collect food, serving as the base of the aquatic food chain. Their work, published in the January issue of American Naturalist, may lead to better understanding of these tiny marine organisms and their impact on global climate change.

The MIT scientists found that these diverse micro-plankton help regulate the carbon flow in the Earth’s oceans via photosynthesis and uptake of carbon compounds. The carbon flow is a measure of the rate at which energy is transferred from a lower to higher animal in the food chain. This information could help uncover mysteries of a vital food source for most of the oceanic ecosystem. Results could have important implication for ocean based industries and ecologists studying ocean impact on climate change. 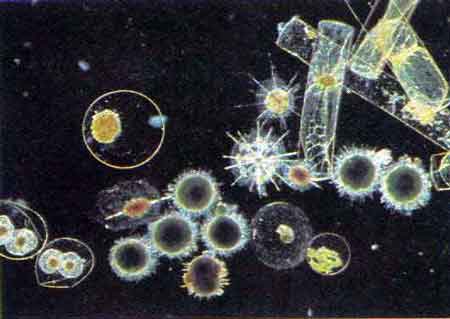 This image shows microscopic plankton, much like the organisms in the MIT study. Their results could provide vital information about their impact on macro-scale ocean ecology. Photo credit: Ocean World

This study is the first to dive in a detailed exploration of how these minuscule organisms find food in the ocean. Justin R. Seymour, co-author and postdoctoral fellow in the Department of Civil and Environmental Engineering (CEE) at MIT explains that the planktonic microbes lives are much more sophisticated than previously thought. "Rather than simply floating in the ocean and passively taking up the chemicals required for growth, many microbes exhibit sophisticated behaviors as they forage in an environment where patches of nutrients and resources are few and far between," Seymour said.

Not only is there a higher complexity in their swimming and foraging, but the carbon flow is at a much higher rate than expected, possibly implicating resource patch formation and exploitation. This could have critical effects to the rest of the marine food web, which depend on these micro-plankton for food.

To study their micro ecosystem, Seymour and colleagues, used microfluidics, a new technology which uses a tool to create a microhabitat where these microscopic creatures can live, swim and forage as they would in a natural ocean environment. Using this laboratory method, they can create an environment for study and observation of these organisms, giving valuable data and information on their interactions with each other and their environment. This provides the first real data of a sub-millimeter scale of single celled phytoplankton, bacteria and protozoan predators in natural interactions. 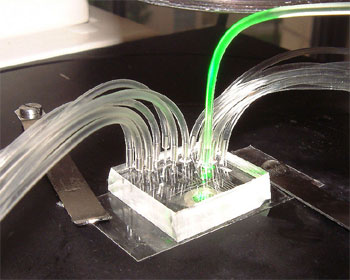 "While relying on different swimming strategies, all three organisms exhibited behaviors which permitted efficient and rapid exploitation of resource patches," said colleague Roman Stocker, said. It took bacteria less than 30 seconds, for example, to congregate within a patch of organic nutrients.

"To understand how environmental fluctuations affect the ecology of populations, it is imperative to understand the foraging abilities and behavior of marine microbes at environmentally relevant scales," the authors wrote.
Erin's Spin
More Articles All Articles
About