Erin Richards
Optical science has taken another leap forward. Increasing amounts of technologies rely on the usage of optic fibers for transmission of phone calls, TV broadcasts, and the internet. Optical fibers allows a higher bandwidth which means faster downloads, and connections.

A team of researchers from Clemson University, headed by Professor John Ballato, have devised a new optic fiber, containing a silicon core. Their findings, published in Optics Express (1), have propelled optic science into a new wave of applications for optic fibers.

"In essence, we've married optoelectronics with optical fibers," said Ballato. "In the past, we've needed one structure to process light and another to carry it. With a silicon fiber, for the first time, we have the ability to greatly enhance the functionality in one fiber." 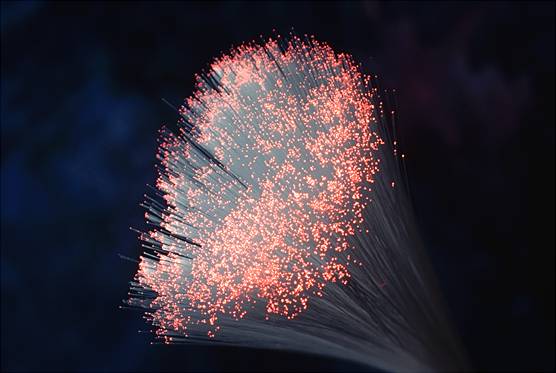 Optic fibers are found in virtually every aspect of life, from your high-definition TV and digital camera to the MRI machine at the hospital. Optics research has allowed the development of tools like the internet and remains on the cutting edge of communication technology.

Standard optical fibers are created using a glass core, covered with different glass and heated until ductile and stretched into wires. Glass materials limit optical efficiency, however, and a crystallized silicon core is more suited to signal transmission along the length of the wire. Crystalline silicon is also ideal for signal conductance due to its non-linear properties that would allow for amplification of light signals or shifts in wavelength. Silicon fiber development allows for signal processing directly inside the fiber itself instead of using separate optical circuits or electronic processing. This synthesis allows for more efficient and compact systems.

Ballato's team is not the first to have produced silicon optic fibers but, by being the first to produce them using commercial means, has proved them viable alternatives for the standard glass optic fibers. The ability to mass produce these fibers has brought them into the commercial spotlight and one step closer to your pocket, desk, and household.