Erin Richards
Feeling down? Wondering how to cheer up? Well perhaps all you have to do is sing a song. Hey, it works for birds.

Researchers at the RIKEN Brain Science Institute in Japan have recently uncovered a breakthrough in animal behavior. In their recent study, they concluded that singing by male birds to attract females stimulates reward centers in their brains, reinforcing their behavior. In essence, singing for mates makes male birds really happy.

Animal brains, including humans, are designed to have a positive emotional response to certain rewarding stimuli. These stimuli are genetically programmed and therefore are intricately related to the survival and procreation of that individual. Thus, sex and food are among the most rewarding stimuli, eliciting chemical reactions that in turn produce positive emotional responses.

Stimuli can activate certain “reward” centers of the brain, which are concentrated with neurons that release dopamine in the brain. One of these areas is located in the ventral tegmental area (VTA) and has also been shown to be the target of addictive drugs such as amphetamines and cocaine. When given these compounds, activity is greatly increased, and dopamine released, causing a feeling of joy and pleasure. These feelings maintain the addictive behavior.

Research by Ya-Chun Huang and Neal Hessler supports that social interactions of animals can also activate the VTA. Working with zebra finches, native to Australia, they studied courtship song of these birds as compared with solo song. Zebra finches uses a specific "directed" song, when courted females while they sing "undirected" song alone, possibly for song practice or communication with unseen birds. The work by Huang and Hessler shows that the "directed" courtship song stimulated the dopamine neurons in the VTA of zebra finches while undirected song did not. 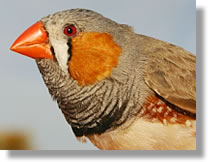 Huang and Hessler’s findings show that the reward centers of the brain, specifically the VTA, are linked with the maintenance of social interactions. Since songbird courtship is also necessary for procreation, it makes sense that the experience is rewarding. This also supports some studies that demonstrate similar responses in humans done on sexual behavior and attachment which also depend on neuronal release of dopamine in the brain.

Despite the genetic and evolutionary differences between birds and mammals, there is a shared mechanism for certain social interactions and reward that produce similar chemical and therefore emotional reactions.

It seems that this one is not just for the birds.

Video shows examples of two types of singing performed by male zebra finches. First, when males can't see other birds, they will sing "undirected" song, possibly for practice or for communication with distant birds. Second, when males can see nearby females, they will often sing "directed" courtship song. In this study, birds either performed only undirected or only directed singing for 45 minutes before their brain function was examined. To increase singing motivation, in all directed singing experiments, males sang to two females (those shown in this video) rather than a single female.