Richard Mankiewicz
A new book, just about to be published, has already caused a stir in the blogosphere. “Science vs. Religion: What Scientists Really Think” by Elaine Ecklund, a sociologist from Rice University, claims that scientists are less atheistic than previously thought.

The dustjacket blurb explains:”In the course of her research, Ecklund surveyed nearly 1,700 scientists and interviewed 275 of them. She finds that most of what we believe about the faith lives of elite scientists is wrong. Nearly 50 percent of them are religious. Many others are what she calls “spiritual entrepreneurs,” seeking creative ways to work with the tensions between science and faith outside the constraints of traditional religion…..only a small minority are actively hostile to religion.”

This is in contrast to a study in 1998 by Edward Larson and Larry Witham, published in Nature; the headline number in this case was that only 7% of 'great' scientists had a religious belief. The sample for this study was taken from the National Academy of Sciences and sought to update a similar study done back in 1914. The surprising thing at the time was how much the figure had dropped in those 80 years, from nearly 28% down to a paltry 7%.

What Ecklund's study seems to suggest, however, is that scientists at the very top of their profession may not be representative of scientists as a whole. However, many commenters have already noted that the influence of the Templeton Foundation may be the more likely source of bias. She received a substantial grant from Templeton to research her book and has this week been interviewed by Chris Mooney (Templeton Fellow in Journalism 2010) for Point of Inquiry, to be aired this Friday. All rather cosy at pushing a less than covert christian agenda.

As the interface between science and religion is notoriously partisan it is entirely right that personal affiliations should be appended to the data and kept in mind when reading about who supports any research, and who doesn't. Does an affiliation necessarily taint the data or conclusions? Let's have a look at some numbers.

The headline number in Ecklund's research is that “ Nearly 50 percent of them [scientists] are religious.” But where does this come from? This link has reproduced some tables from Ecklund's book which have also appeared in her published papers, so I am also copying two of them below for speed. 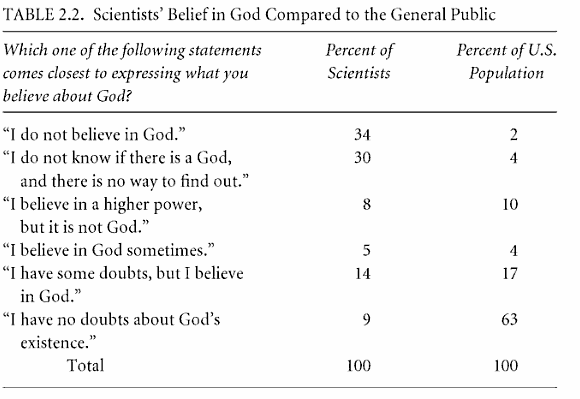 Table 2.1 suggests that 47% of scientists have a religious affiliation and yet Table 2.2 tells an altogether different story with only 9% who truly believe in God (compared to 63% of the general population) and 28% with a weak or wavering faith. So why does the book marketing wish to trumpet a rather biassed interpretation of the findings? Nothing, of course, to do with the source of funding. Why not highlight the highly significant seven-fold difference in convinced believers?

One of the problems is that Ecklund is trying to compare scientists with the general population and to do so she has taken data from the General Social Survey (GSS) and thereby inherits the flaws in the GSS data. Here I'll just mention one topic that appears over and over again in surveys: the category of 'Jewish' can be either racial or religious and the questions often do not distinguish the two. It has been found in other surveys that people will often class themselves within their social group and yet later in the questionnaire appear to contradict themselves. I recall a Pew Forum study where 20% of atheists were also classed as spiritual and, by a strange symmetry, 20% of religious affiliates were also nonbelievers! What is going on is not mysterious but a function of bad surveys that continue to use questions that are liable to multiple interpretations and hence misinterpretation. I don't think that the problem with the 'Jewish' category is unique – I can think of Parsis and Sikhs where there is also no distinction between the word for the social group and their faith – but just that other such category errors are currently below the radar.

When I was writing about Sam Harris's research on belief I noted that his team did a preliminary analysis just so that the statements in the final experiment elicited crystal clear responses. Statements that were prone to misinterpretation were removed or rewritten before being used in the final study. I think it is time to get some clarity into categories of religious thought and experience, else we are going to see more studies that show artefacts of confusion rather than people's real positions on religion.

On the subject of clear categories, Ecklund seems to have discovered the existence of “spiritual atheists” or “spiritual scientists” or “boundary pioneers” or even “spiritual entrepreneurs”! I could have told her that, but I wasn't asked! She would have been less surprised had there been a pre-survey as in the Harris study. However, having taken some four years to complete her survey I suspect such surprise is merely a narrative device. The floundering for a good term is not because we have found something genuinely new but because the history of science and religion has been bogged down in questions of faith and the supernatural rather than turning its lens onto questions of experience. I don't like the term spiritual as it has too much historical baggage – my own preference is for “esoteric scientist”.

Ecklund talks a lot about this borderland in her introduction as some kind of bridge between science and religion. However, it cannot be a bridge when those practising esoteric scientists have left their dogmatic religion behind. The esoteric scientist has already rejected such dogma and gone down a path of experience. Such people inhabit a different landscape, often called spiritual but, again, I think this liable to misunderstanding. What is important is that the investigator is creating a map of their experiences and, if lucky, able to communicate with others to compare whether such maps have correspondences. This is why many then turn to Eastern practices; not because they are exotic but because they already have maps and guides. That they are relatively rare in the West is a consequence of history. Indeed the relationship between mysticism and organised religion is not very different to that between science and religion. The mystic is usually only tolerated if his or her visions are orthodox, otherwise they often end up rather badly.

To me, the way a religion treats its esoteric wing is a good litmus test of its relationship to the natural sciences. That such an esoteric group should also include natural scientists is no surprise to me whatsoever but a great step forward in understanding the totality of the human experience. What is also needed is some clarity of language to go hand in hand with refining our ideas of both science and religion.
Florilegium
More Articles All Articles
About