The so-called “Greenhouse effect” is one of the most persistent fallacies in popular science. It is a flawed speculation left over from the late 19th century, when it was first entertained by such scientific luminaries as Joseph Fourier, John Tyndall, and Svante Arrhenius.

In fact, however, the so-called “greenhouse gases” do not “trap” infrared energy radiated from the surface of the Earth, as proposed; they merely slow its inevitable return to outer space.

Imagine a single packet of incident solar radiation. The fraction that reaches the surface of the Earth will be absorbed and re-radiated as infrared radiation (IR) or “heat”. Most of that emitted IR, after a circuitous “pinball” journey between molecules in the atmosphere, will eventually be lost to outer space. But, a small percentage of it will be momentarily absorbed by “greenhouse” gases (primarily water vapor), only to be re-emitted almost immediately and randomly in all directions.

The small percentage of the IR that greenhouse gases re-emit towards the Earth will again be absorbed and re-radiated, starting the next iteration of a cycle that will successively diminishing the amount of energy remaining from the original packet of incident solar radiation.

The important point here is that the interception and re-emission of ground-emitted IR by “greenhouse” gases does not add any energy to the initial packet of incoming solar radiation; it merely slows the dissipation of that packet of energy. The IR that is returned to the Earth’s surface does not represent a new source of energy in addition to the original packet of incident solar radiation. It is just a continually diminishing fraction of that original solar radiation. Thus, the “Greenhouse effect” does not result in the accumulation of energy beyond what the sun supplies. Rather, it merely slows the rate at which that energy is inexorably lost to outer space.

The result is a moderation of both daytime and nighttime temperatures, not a multiplying of the warming effect of the sun. In fact, the oft promoted specter of “tipping points” and “runaway greenhouse effects” represent nothing less than violations of the First Law of Thermodynamics.

Ironically, the conventionally described “greenhouse effect” (to the extent that it exists at all), would actually have a net cooling effect during the day, rather than a net warming effect, as invariably claimed. While excitedly promoting the absorption of ground-radiated IR by greenhouse gases, global warming enthusiasts ignore altogether the interception of incoming solar IR radiation by the same gases, which has been calculated to be several times greater than the absorption of ground-radiated IR.

The water in Earth’s oceans and atmosphere are the principal moderators of the surface temperature of the planet. Due to the high heat capacity of water, the Earth’s oceans store vast amounts of solar energy, releasing it only very slowly. Also, water in the atmosphere, in the form of clouds, increases the albedo of the Earth.

Both forms of water cool the Earth during daylight hours, one by temporarily sequestering heat, and the other by reflecting much of the incident solar radiation back into space before it can reach the surface of the Earth.

Conversely, the Earth’s oceans and atmosphere reduce the rate at which the planet cools at night, making nighttime on Earth warmer than it otherwise would be. 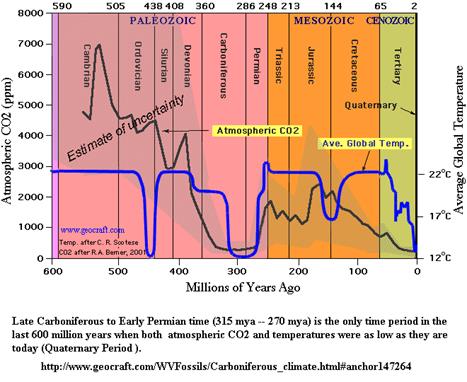 Figure 1. Temperatures and CO2 levels during the Phanerozoic.

The easiest way to appreciate the moderating effect that water and water vapor have on climate is to look at other worlds that lack either oceans or an atmosphere.

The Moon is about the same distance from the sun as is the Earth, but it has no atmosphere and no oceans. Without the moderating effect of oceans and atmosphere, daytime temperatures on the Moon commonly exceed 200°F, and nighttime temperatures commonly sink below minus 300°F. By contrast, the average temperature on Earth is around 61°F.

Obviously, then, it is absolute nonsense to claim that greenhouse gases make the Earth warmer than the sun alone would make it. To the contrary, the sun alone (i.e., in the absence of oceans and atmosphere) would make Earth much hotter during the day and very much colder during the night than it is with the moderating influence of oceans and atmosphere.

Venus, which has an atmosphere that is 96% CO2 and a surface temperature of 872°F, is often cited (incorrectly) as an example of a “runaway greenhouse effect”. However, the surface of Venus is so much hotter than Earth’s, not because its atmosphere contains so much CO2, but because it is some 30% closer to the sun, and its atmosphere is 90 times denser at surface level than Earth’s.

Furthermore, it is the high, solar-induced temperature of Venus that led inevitably to the high CO2 content of its atmosphere, and not the other way around. For, even before it had a substantial atmosphere, Venus was evidently too hot to retain water in its liquid state, so no oceans could be formed. Without oceans to absorb CO2 and sequester it in sedimentary rocks like limestone (which is only formed in sea beds), virtually all of the CO2 on Venus must reside in its atmosphere.

By contrast, on Earth, 70% of which is covered by deep oceans, 99% of the carbon on the planet is sequestered in sea water and limestone. Earth’s atmosphere, on the other hand, contains a paltry 0.04% CO2, making the latter quite literally a rare gas, one which can have no significant effect on Earth’s climate. (The absence of any obligatory relationship between CO2 levels and temperature is evident throughout the last 500 million years, as shown by Figure 1. The Phanerozoic).

Therefore, while the scientifically bankrupt concepts of “Tipping Points” and a man-made, “runaway greenhouse effect” have obvious political applications, the mere existence of the Earth’s oceans make it an impossible, and obscene fantasy.
Frank Schnell
More Articles All Articles
About

Dr. Frank Schnell, PhD, is a retired toxicologist from the Agency for Toxic Substances and Disease Registry, part of the CDC, in Atlanta, Georgia....