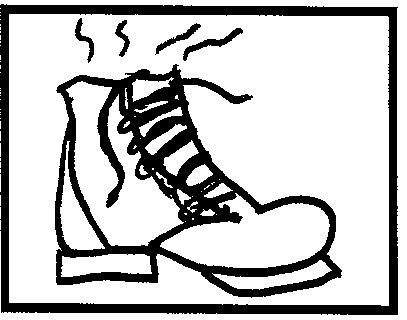 For many hundreds of years, people in Eastern Europe have treated epileptic seizures with the quick administration of shoe smell. This smell (and specifically this smell) has the power to arrest the seizure, or so says the folk wisdom.

If the brain were a boxing glove, the temporal lobe would be the thumb (your brain actually has two of these “thumbs”, one on either side). The temporal lobe is the home of memory, speech and hearing, and also houses the olfactory cortex, where we process smell. When the temporal lobe seizes, as it might during an epileptic incident, the onset is frequently marked by phantom smells, a condition called phantosmia (not to be confused with parosmia in which a present smell is distorted).

Research published in the March 2008 issue of Clinical Neurology and Neurosurgery suggests that a strong smell administered just as a seizure starts functions like a slap to the face or the shock of defibrillation paddles to reset “truth” in the olfactory cortex, thereby stopping seizure in the temporal lobe. And in yesteryear’s Eastern Europe, where the folk cure of shoe smell originated, shoes were made of tanned leather and likely to be crusted with mud, sweat and a panoply of other various and sundry smells—in other words, shoes were the smelliest, most easily accessible things to hand in the cases of most epileptic seizures.

So there may be at least some truth to the folk cure.

How might the world be different had someone lobbed a sneaker at Emperor Constantine as he sat seizing atop his horse?

More importantly what kind of geek are you? If input="math geek", goto

your nearest bookstore and purchase a copy of Geek Logik: 50 Foolproof

Equations for Everyday Life. If you're a full featured, renaissance

geek of all trades looking for a good time at others' expense, consider a

copy of The Geeks' Guide to World Domination:

Be Afraid Beautiful People. And if you're a geek of the mind,

Paradoxes, Puzzles, Logic and Illogic to Nourish Your Neurons