Johannes Koelman
Well, kind of. David Wineland and Serge Haroche have not endangered any living beings. That is to say: probably not in their physics experiments.

Yet, although they stayed at a safe distance from bringing life form into quantum superposition, both physicists have thoroughly explored the schizophrenic world of the quantum, and opened the door to the direct observation and manipulation of quantum superpositions. By cleverly exploiting the fundamental interaction between light and matter, the two quantum optics experts have managed to pull off a range of experiments in which Schrödinger's cat states lead to bizarre results. 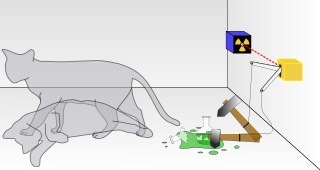 Quite aptly, where quantum physics blurs the distinction between the wavy nature of light and the particle nature of matter, Wineland prefers to manipulate matter with light, while Haroche manipulates light with matter. According to what is arguably the deepest truth in quantum mechanics, either approach provides a valid methodology to explore the quantum.

Rather than me attempting to give a flavor of the amazing experiments carried out by the Boulder, Colorado (Wineland) and Paris (Haroche) groups, I better give the word to one of the two laureates . (If you permit yourself no more than a single mouse click on this page, make sure it is a click on the previous link...)

In the popular media you will read a lot about quantum superposition experiments enabling amazing quantum computing opportunities. Dramatic claims about prime factorization are being made. Soon your credit card transactions are prone to quantum hacking! Take these claims with a sizable grain of salt. The current state-of-the-art in quantum computing has allowed us to establish that 21 is probably equal to 3 times 7. And that was a tour de force.

But that takes absolutely nothing away from the landmark achievements obtained by Wineland and Haroche. The guys in Stockholm have again done a great job. Congratulations to David Wineland and Serge Haroche, and their many collaborators!


PS. Alfred Kastler, Alain Aspect, Claude Cohen-Tannoudji, Serge Haroche. What is it that pulls the French into the quantum world of light and atoms? Louis de Broglie's legacy perhaps?
The hammock physicist
More Articles All Articles
About