Johannes Koelman
How do airplanes fly? The next time you find yourself in an airplane, look around at your fellow passengers. How many of them would be able to explain to you what force keeps the hundreds of tons  of metal up in the air? How about yourself? Would you be able to explain this applied physics feat to the person sitting next to you?

Wings are simple and straightforward devices, yet misconceptions abound on how they work, and many people carry wrong perceptions on their lift-creating mechanism. The 'equal transit time' fallacy being the most prominent misconception in this area.

The physics of flight is well understood and straightforward. Airplanes and earth gravitationally attract each other. Newton's laws of motion tell us that to defy gravity and keep the airplane and earth at constant separation requires exchange of momentum between both bodies. This exchange of momentum is realized by the wings of the airplane directing air to earth, and earth reversing this airstream back up. That's it folks. Circulating air. That is how an airplanes fly, how helicopters fly, and how birds fly.

Let's look in more detail at the circulating air mass generated by airplanes. Below animation sketches the large scale air movements as observed from a coasting airplane (red dot).

From your vantage point within the airplane you see earth's surface (lower edge of the figure) shooting by. This moving earth surface drags along air, and you in the plane perceive this air flow as an effective headwind. The plane's engines are working hard to overcome the drag induced by this headwind. But there is more air movement than just this headwind.  If you look careful at this animation, you will see superimposed on the uniform left-to-right flow of air (the headwind) a clockwise circulation of air around the airplane. Air moves up in front of the plane, and moves down behind the plane. The lift on the airplane is equal to the change in momentum (the change in the product of mass and velocity) of the air diverted from up-moving to down-moving. Aerodynamics engineers refer to the downward velocity of the air behind the wing of the plane as 'downwash', and the upward velocity in front of the wing as 'upwash'.

If we isolate the circulation from the 'headwind', the following conceptual picture emerges: 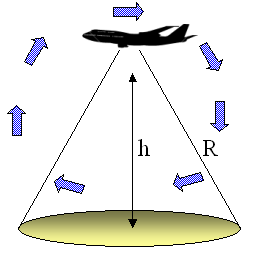 The wings of the airplane divert up-moving air down. A large portion of this diverted air is located above the airplane.  How do the airplane wings manage to divert all this air from far above? This is because air consists of erratically moving molecules that tend to spread over the full volume available. When the air in the layer just above the wing is pushed down, it allows the air molecules above this layer to get in. As a result higher air layers get accelerated down. This creates room for air molecules in still higher layers to move in, and so on. All of this pulling in of air molecules causes the pressure to become lower above the wing. This is nothing more than a direct manifestation of Newton's laws of motion applied to the accelerated air. It is referred to as Bernoulli's principle: the downward acceleration of the air circulating above the wing generates lift.

Exactly the same considerations apply to the volume of air that reaches ground level and gets diverted upwards. The net effect is that the full airplane weight rests on the surface of the earth. And yes, this is observable; more about this later!

This picture of air circulation as the direct cause of lift dates back more than a century. At that time, the German mathematician Martin Wilhelm Kutta and the Russian scientist Nikolai Zhukovsky independently developed the mathematics of circulating flows that allows us to predict the lift of wings.

As should be clear from the above, anything that generates a backspin air circulation around you, can serve as wings to keep you in the air. Airfoil shapes provide optimized wings, as such shapes tend to minimize the drag for a given amount of lift. But you don't need this particular shape to keep you in the air. An upside-down airfoil works as well, and so does a tilted barn door. All of these create circulation by diverting air in a downward direction. Perhaps the cleanest manner to generate a backspin air flow is a rotating cylinder. And yes, these make a viable, albeit inefficient and impractical, wing design (see figure). 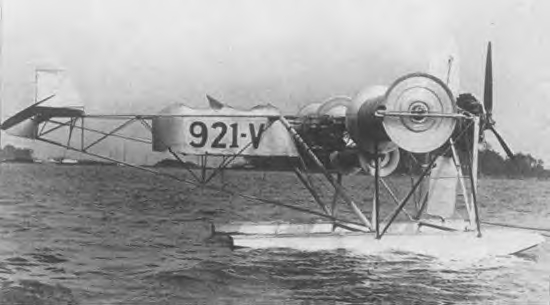 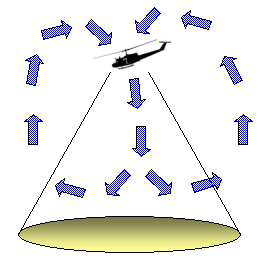 
Footprint Of An Airplane


What goes up must go down, and what comes down must go up again. This credo applies in full to the air circulation that keeps planes in the air. So the lift exerted on the airplane is balanced by an equal downward force on the earth. In other words, whether the airplane is grounded or in the air, it has a footprint that supports  its full weight.

How large is the footprint of an airplane in flight?

The work of Kutta and Zhukovsky provides the answers. The footprint of an airplane cruising at a height much larger than its size can be calculated using their circulation theory. The answer will surprise you. The footprint of an airplane in flight is large. In fact, for a flat earth it would be infinitely large. That is to say: no matter how far removed from the airplane, any area of earth would feel some of the weight of the airplane.

The large extend of the footprint makes the force exerted by the plane's footprint on a given surface very small. A most fortunate consequence as a half a million lbs Boeing 747 with a small footprint would crash anything underneath. If you do the math, a Boeing flying at only 500 meter (1,500 ft) height will create a 1 Pascal  (0.00001 Atm or 0.00015 Psi) pressure underneath. When flying at higher altitude, this pressure drops to even lower values.

With modern micro-barometers such as those used to monitor and record infrasound resulting naturally from earthquakes, volcanoes, lightning, sonic booms and nuclear explosions*, the footprint of airplanes flying high up in the air can be observed. In this month's edition of NTVN, the Physics Journal for members of the Dutch Society of Physicists, atmospheric scientist Peter Siegmund and geophysicist Laslo Evers report on such measurements. Using an array of microbarometers laid out at surface, they obtained transient pressure readings from flying airplanes in line with the Kutta-Zhukowsky description of flight. They managed not only to detect airplanes and determine their position, the measurements even allowed them to weigh the airplanes in full flight!