Johannes Koelman
With the press of a button, yesterday Queen Beatrix of the Netherlands activated LOFAR and started the recording of its first official image. LOFAR (LOw Frequency ARray) is by all standards a big radio telescope. Centered in the North East of the Netherlands, it stretches far over the Dutch borders into Northwest Europe. 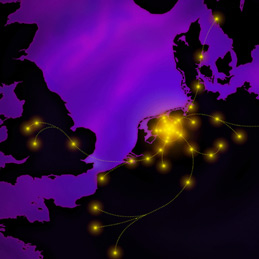 Given its total antenna area, LOFAR is the world's largest radio telescope. Whilst that in itself makes LOFAR already stand out, the real distinguishing feature of LOFAR is its design principle. LOFAR does not rely on parabolic focusing mirrors, characteristic for large telescopes. In fact, LOFAR does not focus at all. Using many thousands of simple radio antennas, myriads of signals from all directions are digitized and send via high data-rate fiber-optic communication lines to a supercomputer. This giant Blue Gene/P computer combines all the data and, based on minute differences in arrival times of signals at different antennas, unravels the directions the signals originate from. This results in a synthetic image of unparalleled quality. 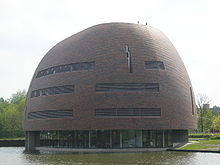 The building in Groningen (The Netherlands) housing
the heart of LOFAR: a Blue gene/P supercomputer

This is reflected in the fact that the vast majority of its cost goes into digital electronics: the digitizers that is part of each individual antenna, the fiber optic network that connects all antennas, and the supercomputer that forms the rapidly pounding heart of LOFAR. LOFAR's design philosophy hinges on Moore's law that quantifies the exponential growth in digital computing capacity. With computing power doubling every two years, LOFAR can be seen not just as the world's largest telescope, but as a trailblazer for exponential growth in 21st century radio astronomy. 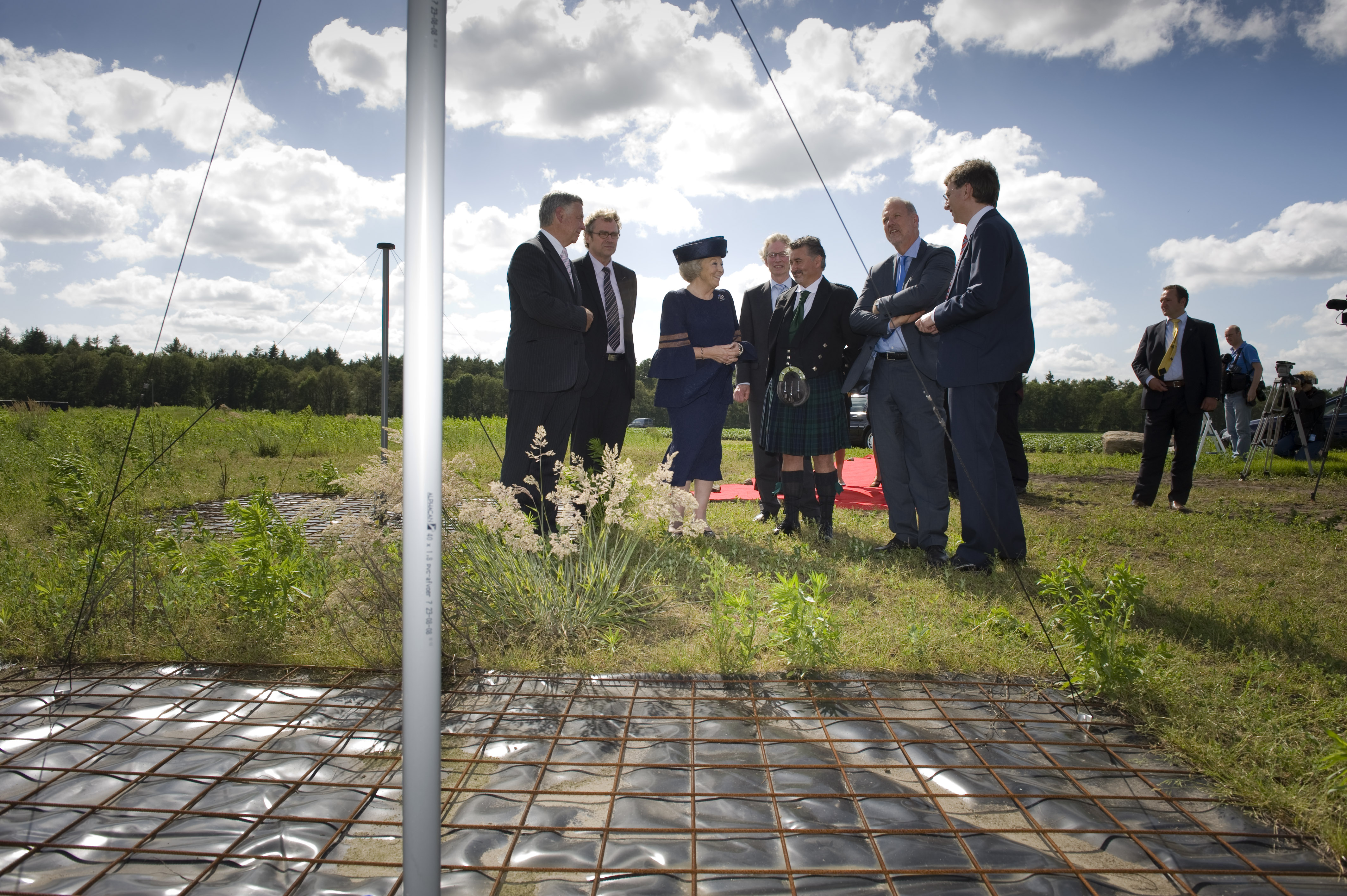 One of the many thousand LOFAR antennas with Queen Beatrix in the background. (Photo copyright Hans Hordijk)

Two key parameters determine the capacity of large radio telescopes: image resolution and detection sensitivity. The first is determined by the square distance between all antenna elements, and the second by total antenna area. With up to 25,000 antennas placed in the Netherlands and across its borders in Northwest Europe, LOFAR excels at both. Moreover, by keeping the hardware simple, and performing the imaging by advanced software, LOFAR provides astronomers with the most flexible and most versatile telescope ever designed. As all data are recorded, LOFAR is ideally suited for large-sky surveys. LOFAR can also zoom in on different areas of the sky in parallel fashion, and serve multiple astronomy teams at the same time. By continuously covering the entire sky, LOFAR can also be used to detect ultra high energy cosmic rays as they enter earths atmosphere. Other promises that LOFAR holds are the detection of weak radio emission predicted to result from cosmic-ray electrons bend by cosmic magnetic fields, other transient radio signals, and potentially even SETI signals.

Most importantly, however, LOFAR will allow us to look deep into the early universe.


Witnessing the switching on of the lights
If you gaze at the stars in the night sky, you look back in time. By observing bright stars like Sirius, you look back 10 or more years in time. The deepest one can look back with the human eye is several million years by watching nearby galaxies like Andromeda. LOFAR will look back much deeper. In fact, LOFAR looks back so deep in time that it becomes more meaningful to characterize its place on the cosmic timescale by quantifying its time since the big bang. With our cosmic calendar indicating 13,700 Myr AB (Mega years After the Bang), LOFAR will explore the formation of the first quasars and the end of the dark age that is estimated to have taken place at around 200 – 500 Myr AB. As such, LOFAR will look deeper into the universe than the Hubble ever did.

To look this deep, LOFAR is optimized to observe the spectral line of hydrogen, the component that filled the early universe. The hydrogen line radiates at a wavelength of 21 cm, equivalent to a frequency of 1,420 MHz. However, the expansion of the universe since the end of the dark ages has caused at least a tenfold stretching of the 21 cm line, resulting into corresponding 'redshifted' frequencies of around 140 MHz. LOFAR is ideally suited for these observations, with a sensitive range from a few tens of MHz up to 250 MHz.*


Costs and promises
As I recently criticized the costs of the Hubble Space Telescope, you might wonder why I haven't mentioned LOFAR's costs. Well, compared to the Hubble, these are peanuts. Total cost for LOFAR is estimated at 150 million euro, or just above 1% of the cost of the Hubble.

We are entering interesting times. You may expect not only a wealth of discoveries from LOFAR, but also from LOFAR's future followers such as the Square Kilometre Array (SKA).

* LOFAR has to avoid the frequency band of 80 – 120 MHz as this band is highly contaminated by human activities (FM radio).
The hammock physicist
More Articles All Articles
About