Johannes Koelman
In my late teenage years I grew fond of Scientific American. Although language caused a barrier, and while I could digest and understand only some of the articles, the popscience presented opened my eyes to exciting developments and invited me to study further the subjects presented.

These days, many years later, I still glance through the magazine, but generally with less enthusiasm. Today's editions seem packed with rather superficial information, and the articles tend to be less inviting towards further studies. Yet, once in a while, a hidden jewel attracts my attention. Such is the case this month with an article by Steve Carlip from UC Davis. Subject is quantum gravity. Quantum gravity in a pancake universe, that is.

The article makes frequent reference to Edwin Abbott's 1884 novel "Flatland, A Romance of Many Dimensions" and is aptly entitled "Quantum Gravity in Flatland". Carlip eloquently explains why the holy grail of modern physics, the unification of gravity and quantum mechanics, is much less problematic when one sacrifices one spatial dimension. The key theoretical observation is that in contrast to what is the case in our 3D universe, in Flatland there is no opportunity for gravitational fields to propagate. There are no gravitational waves and therefore no gravitons. This means that Flatland lacks the gravitational degrees of freedom that cause quantum gravity calculations to blow up. Without such degrees of freedom, quantum gravity theory is straightforward, and the math provides sensible answers.

In his Scientific American article, Carlip discusses what is probably the easiest realization of topological gravity: a spatially flat 2D universe with the topology of a donut surface. Such a donut topology is defined by the fact that you can return to your original position via two distinct routes neither of which can be shrunk to zero size, and that can not be morphed into each other. A donut accommodates such alternate routes: those that go around via the central hole, and those that go around the rim. A donut achieves these topological characteristics at the expense of bending its surface. However, the very same topology can be achieved for a perfectly flat surface. All that is required is an unlimited number of copies of a flat piece that can be connected together in a periodic fashion and without leaving any gaps. Below figure gives an example of such a periodic universe with one particular return route rendered visible.

This model universe is certainly not an accurate model of our universe, not only because it lacks a third spatial dimension, but also because it fails to exhibit accelerated expansion. Yet it is a model that can be quantized, and as such it provides an interesting playground for theorists. Playing with such toy models, in 1992 three Chilean theorists, Banados, Teitelboim and Zanelli, made the amazing discovery that two spatial dimensions are sufficient to accommodate black holes. All that is needed to render possible black holes in Flatland is the addition of some negative vacuum energy. Although of lower dimension, the resulting BTZ black holes are just like the black holes that are believed to populate our universe. More in particular, BTZ holes have a temperature and radiate just as predicted by Hawking.

This seems most puzzling. In the absence of local degrees of freedom, how can a Flatland black hole have a temperature and radiate?

A quantum gravitational study of BTZ black revealed that although a 2D universe is like a sea without waves, when it incorporates islands (black holes), these are surrounded by a surf. In other words: the edges of Flatland vibrate and wiggle. And they do so in a way that yields a temperature exactly as predicted by Hawking. This provides us with what seems to be a remarkable realization of a holographic universe. In this case the universe is two-dimensional with the degrees of freedom residing at one-dimensional boundaries.

Recent work by Witten (again!) and Maloney suggests that Flatland quantum gravity is a subject still far from being fully understood. Either Flatland gravity models are too restrictive to help us understand real world gravity, or gravity is a phenomenon even more subtle than we so far have assume it to be. In the latter case we will desperately need Flatland models to sharpen our intuition and to get ready for the real thing: quantum-gravity theory in Spaceland.

In any case, as is often the case, Einstein has the last word. That also holds true for the subject of simplified quantum gravity models: 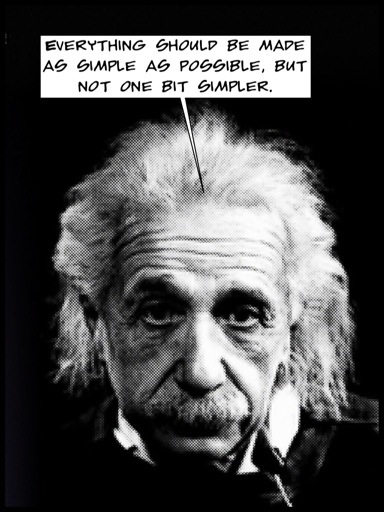 --------
Not afraid of some math, and want to read more about planar black holes and Donuverses? Check this overview article by Steve Carlip.
The hammock physicist
More Articles All Articles
About