Johannes Koelman
Last time I blogged, I discussed entropic gravity and ended with the prediction that we will witness some more opposing and supportive views on entropic gravity before the dust will settle on the subject. The moment I wrote these words, a critical article on Verlinde's entropic gravity idea appeared, soon followed by a an article that brushes aside all earlier entropic gravity criticism based on neutron experiments.

I haven't read these articles in detail, as a cursory look gave me the impression that these two articles add little to the various arguments presented already. I refer here to these articles here as yet another demonstration of the fact that predictions from the hammock are always spot on. Right.

Having said this, I have to admit that little did I expect the current outburst of creativity related to entropic gravity.

What entropic creativity am I referring to?

Firstly, Erik Verlinde and his twin physicist brother Herman Verlinde appeared in a talkshow on Dutch television (sorry, no subtitles). Erik was asked to explain entropic gravity in layman's terms. He struggled for a minute and then his brother Herman came to the rescue. Herman made a remark along the lines of "entropic gravity is nothing more than an example of the Rumsfeld Principle". This statement immediately caught the attention of the talkshow host and the public, the more so because Donald Rumsfeld was mentioned in the program a few minutes earlier in connection with the 9/11 anniversary.

What Herman hinted at is that we don't know the most fundamental degrees of freedom of the universe. In Rumsfeld speak these are unknown unknowns. We simply lack the quantum gravity theory that would give us a description of these fundamental degrees of freedom. Now the amazing thing is that, although we do not know these unknowns, via some clever reasoning embodied in the 'holographic principle' we can keep count of these unknown unknowns. We also know that the count of the unknowns is nothing more than the entropy, and therefore according to the second law of thermodynamics, the number of unknowns of the universe can only increase. It is as if a force pulls the universe into less well described configurations. This force we experience as gravity. At least that is what entropic gravity tells us.

Referring to the known count of the unknown degrees of freedom as the 'Rumsfeld Principle' is a brilliant move. Will it stick? It surely should!

Some more creativity on entropic gravity was triggered by my most recent blog post discussing the Mikado universe. Garrick Toubassi managed to bring to life the concept of entropic gravity by creating a browser based simulation of the Mikado universe. You may want to try a few runs yourself. The four circles representing the entropically gravitating bodies will end up on top of each other, but this can take some time!

Finally, Andy Treadwell has created a one minute animation on entropic gravity in which he uses to good effect some attempts out of the hammock towards explaining entropic gravity. A most enlightening experience to listen to your own words in a nerd-meets-girl context! It seems that Andy has started a how-not-to-get-the-girl series based solely on entropic gravity conversations.

Let me finish by adding to this burst of entropic creativity my own modest attempt to be creative. The former United States Secretary of Defense explaining how entropic gravity follows from the Rumsfeld Principle: 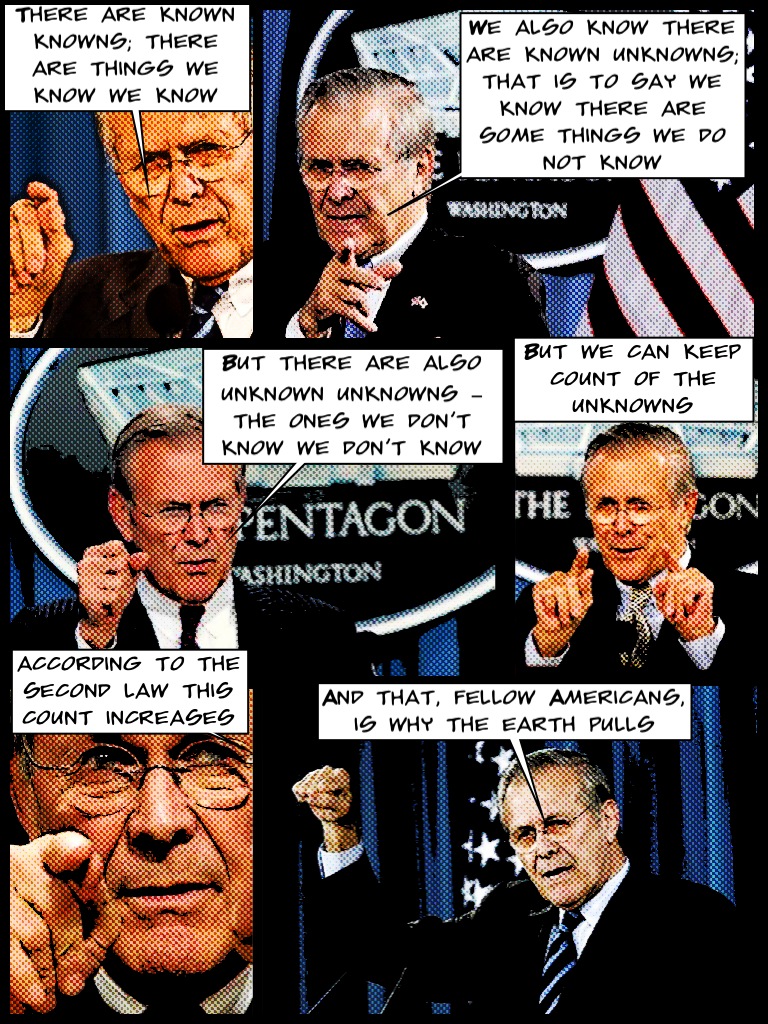