Lots of people have asked me for my views on Erik Verlinde’s latest paper “Emergent Gravity and the Dark Universe“. This fifty-one pages long preprint has attracted a fair bit of media attention. Particularly in the Netherlands, Verlinde’s name being attached to the draft paper has caused a true hype. Un-Dutch roaring headlines in the Dutch national newspapers include: “Breakthrough Theory: Dark Matter Is Utter Illusion – Dutch Professor Rivals Einstein“, “We Are at the Brink of a Revolution that could be larger than Quantum Physics and Relativity Combined“,  and “Breakthrough Article on Gravity Renders Verlinde the Most Celebrated Scientist of 2016“.

Last week I found myself standing in the back of a room somewhere in the south of the Netherlands. Erik Verlinde kicking off the session on dark matter at physics@veldhoven was the probable cause for the room being packed. 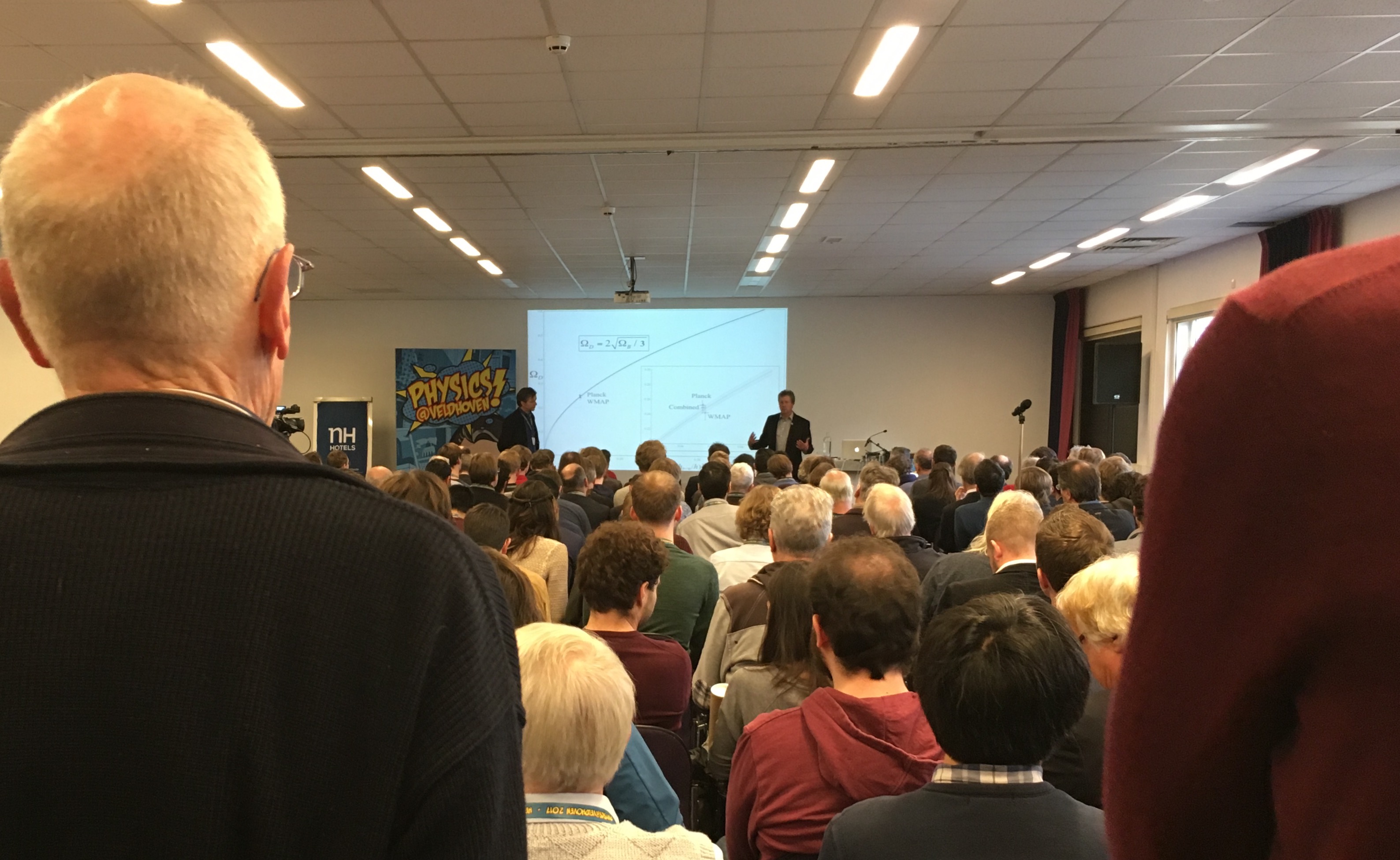 Just like other physicists, I am eagerly awaiting results from the various dark matter detection experiments. I certainly do not consider myself to belong to the group described by one of the subsequent speakers as ‘dark matter deniers’. At the same time, I do feel the standard model of cosmology contains too many coincidences to convince me dark matter is real. On balance, I remain sympathetic towards papers that provide an alternative to the somewhat baroque ‘gravity + dark matter + dark energy’ description of our universe. Verlinde’s paper states that this trinity can be reduced to the duo ‘gravity + dark energy’. In other words, Verlinde claims that in a universe with dark energy, the long-range effects of gravity get modified such that dark matter appears to be present

With a lot of hand waving I can dumb-down Verlinde’s position as follows:

1)  Spacetime (and gravity, its curvature) is emergent from the information captured in quantum correlations. This in itself represents by no means a new concept. Emergent spacetime is best understood for a model universe containing nothing else than ‘dark anti-energy’ (so-called AntiDeSitter space) and goes under the cryptic label ‘ER=EPR’.

3) Due to competition between local and non-local quantum correlations, emergent DeSitter spacetime does not thermalize over large length scales, thereby causing a ‘glassy behavior’ and ‘elastic dynamics’ which lead to long-range deviations in the gravitational behavior commonly attributed to dark matter.

So, to eliminate dark matter, Verlinde requires fundamental degrees of freedom that are non-holographic in nature and that also feature non-equilibrium behavior. Particularly at point 3) the paper is rather impenetrable (at least for me) and it is unclear to me how exactly the ‘glassy dynamics’ emerges. In his talk Verlinde didn’t address this point.

For the time being, we may step over any issues in the derivation, as in the end what matters is how successful Verlinde is in quantifying the apparent dark matter. The formula he proposes (equation 7.40 on page 38 in Verlinde’s preprint) adds to the gravitational acceleration a ‘dark acceleration’. The equation he provides applies to static mass distributions with spherical symmetry only, and can be condensed into:

Here, g denotes the (constant) gravitational acceleration over a spherical surface  centered around a spherically symmetric mass distribution, the angular brackets denote averaging over the whole sphere, a represents the apparent ‘dark acceleration’, c is the speed of light and Ho the current value for the Hubble constant. This represents a MOND-type modified gravity. Just like the phenomenological MOND description, Verlinde’s equation can be expected to struggle in describing dark-matter phenomena such as the acoustic oscillations in the cosmic microwave background (CMB).

My final ordeal? I had hoped Verlinde’s lengthy paper to culminate in an equation with wider applicability. Cosmology has evolved into a high-precision scientific discipline thanks to a wealth of quantitative information on the CMB. Verlinde’s paper doesn’t address dark matter effects in the CMB. It is unlikely that Verlinde’s approach will attract a professional following anywhere near to what the Dutch newspaper headlines suggest, unless Verlinde manages to apply his approach successfully to the acoustic oscillations in the CMB or any other area where MOND fails.

Until that happens I am most happy with my tax money going to dark matter detection experiments.

-- this post also appeared on hammockphysicist.wordpress.com. ---
The hammock physicist
More Articles All Articles
About