Hank Campbell
Thanks to COVID-19, the public has gotten a lot more skeptical about claims that chemicals, food, and medicine are corporate conspiracies created to replace natural products that worked just fine. Even more ridiculous has been the belief that millions and millions of people are dying from these newer products even though there are no bodies to be found.

Science is back, and that may be why Business Insider published what can perhaps be described as an advertorial for environmental groups who have to be sweating now that their campaigns against the modern world are being laughed at.

It is titled "34 of the most dangerous things science has strongly linked to cancer" but for most of them, science has found nothing of the kind.

It all feels very 2019, the same way it feels weird to see clips of old talent shows where everyone is hugging. Maybe it's simply tone deaf that Business Insider would roll this sort of thing out when the science community wants people to embrace reason and the real world, while the rest of culture would like for everyone to stand up to the real problems of race in police conduct, so while I have no proof this is paid content, at least no more proof than their claim that pickled eggs cause cancer, it certainly looks more like a 2016 Upworthy story than journalism. 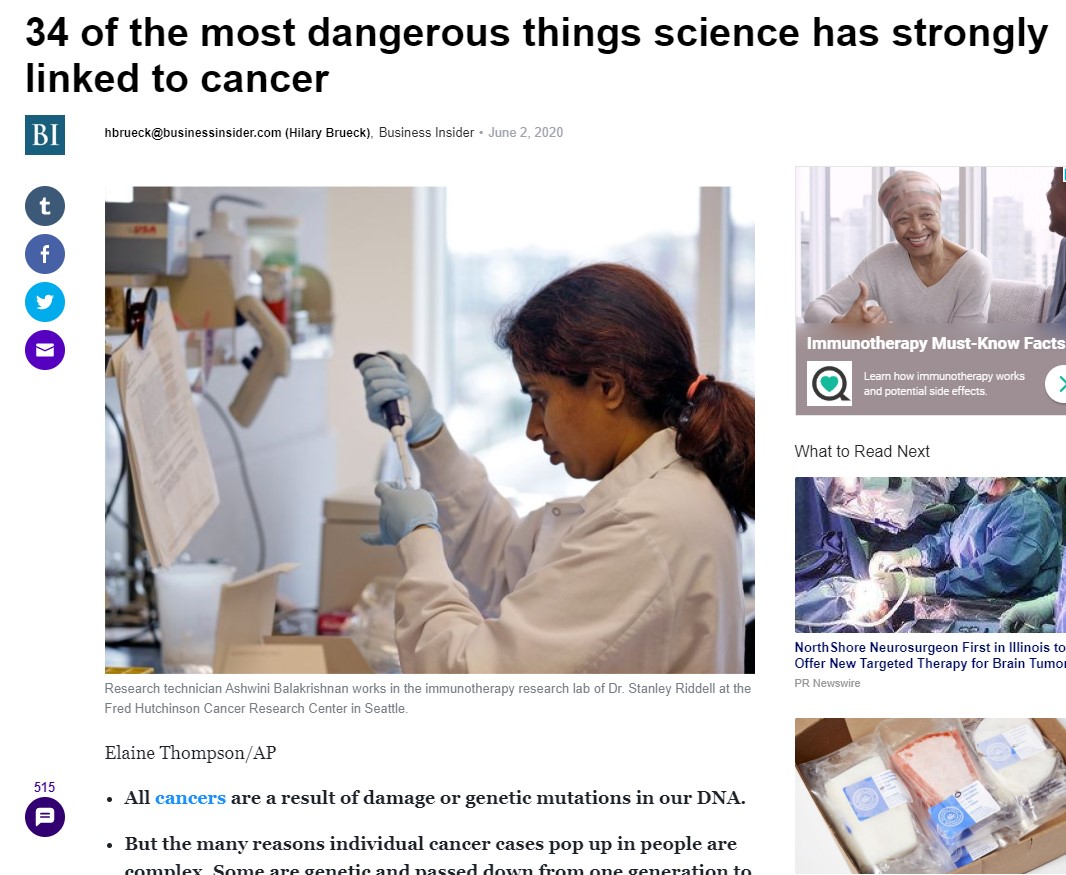 It starts off okay, but then instead of giving us science on cancer, it uses a bunch of correlation created using meta-analyses and food frequency questionnaires. Not science. And to seem more science-y, they paid for a bunch of pictures of science from other organizations, though none of them are in the article.

As the safety valve writers invoke to not look like they don't know what they are talking about, these articles always abuse the language of statistics. There is liberal usage of terms like "linked", "associated", and "suggested." In meetings at NIH where we have tried to address the distrust the public has of science and certainly science journalism, I have asked if it would be possible to require that all NIH-funded studies with words like linked, associated, or suggests in them have EXPLORATORY watermarked in red across every page and scientists there just smiled. They know it is a problem, and they know they are helpless to do anything about it.

I am not criticizing all epidemiologists, there are thousands of great ones. You just won't find them in press releases from Harvard School of Public Health or on IARC panels today. I am criticizing those out to make a media splash by using statistical correlation to create provocative exploratory claims that get thrown into press releases while downplaying that they still need science to confirm their beliefs. Some journalists, those sympathetic to anti-science groups under the guise of being anti-corporate, repeat such claims without ever reading the fine print. And the fine print is this: Hazard and risk are not the same thing.

Sharks are a hazard but if you live in North Dakota how much risk do you face? You wouldn't know by reading monographs about sharks if they are produced by the International Agency for Research on Cancer (IARC), the U.S. National Institute of Environmental Health Sciences (NIEHS), or Ramazzini Institute (CRACKPOT).  All you'd read was that sharks are linked to deaths and then Natural Resource Defense Council and Center for Biological Diversity would try to shake down the government for a settlement because sharks are not regulated enough. 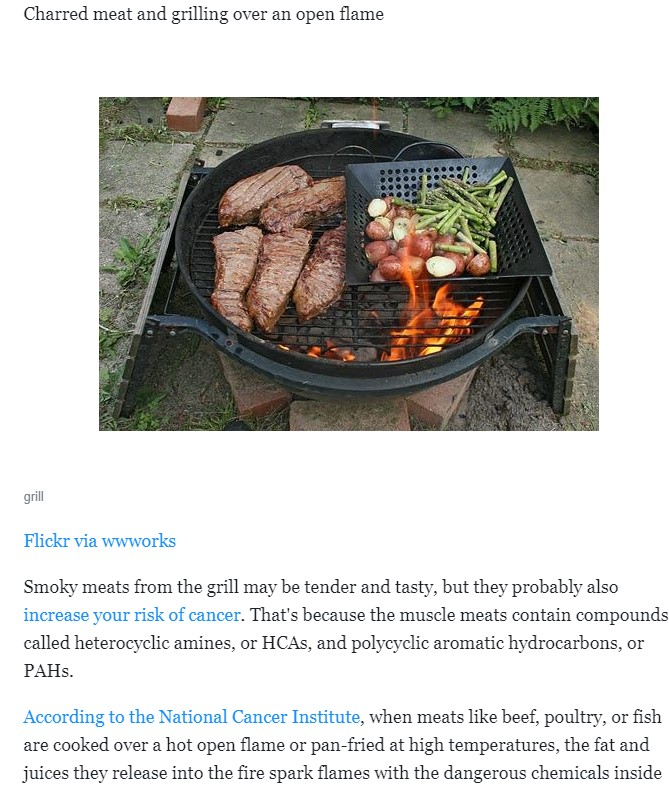 You need to believe in homeopathy for this to be true - which epidemiology can accomplish, just survey homeopaths about their health and declare statistical significance. But in the world of science the presence of a pathogen does not create pathology. Instead, the dose makes the poison. Or we'd have been extinct 10,000 years ago.

Journalists get away with this stuff using two techniques; the first is 'it's not me, it's in a science paper' rationalization. Hydroxychloroquine was in a peer-reviewed paper too, is Business Insider promoting that over the objections of scientists? No? Then why continue to claim sugar causes cancer when there is zero evidence for it any better than the claims about hydroxychloroquine? Or natural gas? Or processed foods, whatever that means? Are Business Insider editors and writers munching on raw wheat they picked in the field? Because otherwise they are eating processed food.

One warning science there won't be any science; they have to use science in the headline. Double warning flag if they use "according to actual science."

The second way they get away with repeating junk science is using correlation words, as detailed above. Journalists know the public does not know the distinction between correlated and linked and "causal." Good journalists spell out the difference, that correlation is not causation. Just because you can correlate the rise in eating organic food to the rise in autism does not mean organic food causes autism.

Nope. But Business Insider might as well have said it, because the article showed just as little skepticism about association.

All good advertorials contain an element of fact, that is how they bring in gullible people, so a few on the list are actual carcinogens. So don't drink arsenic, if you needed to be told that. Alcohol and smoking, absolutely carcinogens. But working at night and grilled hamburgers? The list is so ridiculous I am surprised it isn't in Environmental Health Perspectives. 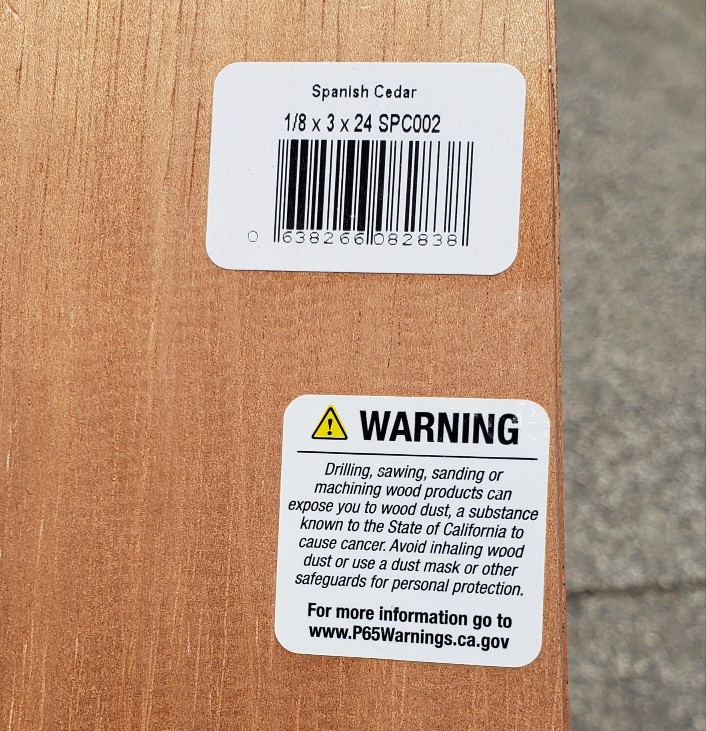 Spanish cedar will give you cancer? No, but statistics can accomplish anything. And California turned over its decision-making to remote statistical organizations - back when IARC was still legitimate - and now we all endure stupid warning labels that have made us a laughingstock worldwide. Credit: Hank Campbell

Look, I get that Business Insider is not a science or health outlet, picking on them may be unfair the same way it's unfair to punch down on Huffington Post or AlterNet, but how can we expect the public to trust media accounts of epidemiologists on coronavirus when large media corporations are also making money rewriting junk epidemiology claims about weedkillers?

2020 will hopefully result in a lot of changes, both in culture and science media. Maybe the New York Times will stop writing about quarantining with ghosts, maybe coronavirus will be the end of junk epidemiology, but the public won't see the problem unless we start to talk about it. And that means an end to pretending mouse studies and food frequency questionnaires overrule biology, chemistry, and toxicology. If we don't do that, we remain stuck in a world where anything and everything can be claimed to both cause and cure cancer, which means the public will be right to trust none of it.