Hank Campbell
Nearly 70 years ago, results of a Swedish experiment, now called the Vipeholm studies, correlated frequent candy consumption and tooth decay. With the benefit of scientific hindsight, this is no surprise. What is a surprise is how different cultures reacted.

For example, instead of public awareness campaigns highlighting the effects of carbohydrates on oral health, as Americans might expect, Sweden asked people to cut back on candy drastically, to eating candy one day per week. Thus was born lördagsgodis - “Saturday sweets.” Parents only let their kids eat candy on Saturday.

They believed, or at least wanted to argue for reasons we'll go into shortly, it was not the amount of sugar that was the problem, but rather, since the study fed people candy every day, that eating it for more than one day a week caused problems. Contrast that to America, where instead of government efforts, the free market came up with products like sugar-free gum and people chewed it when they wanted better breath instead of the older kind. 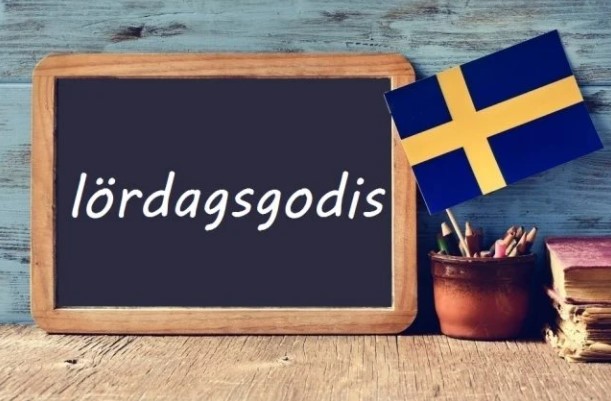 Image: nito103/Depositphotos via The Local

In the early part of the 20th century, dental cavities and resulting missing teeth - every problem meant it got pulled - were so common that for military enlistment you were deemed fit if you still had six opposing teeth. Yet the science community knew it was a solvable problem. Then the debate began in earnest over whether the cause was sugar or vitamin deficiency. Genetics and dental care didn't get much thought. When the Swedish government took action, in the late 1950s, over 80 percent of toddlers had cavities at age 3. Sweden was the candy consumption capital of the world and getting that to change was going to be a challenge.

How they decided candy on Saturdays was the solution, and the study that prompted that shift in culture, is a story in itself.

It's actually charming to see healthy-looking people in Konsum on a Saturday with bags of candy. It is a communal experience, but it didn't start that way. It started with experiments that would land people in jail now. In Vipeholm Hospital, using government money, industry supplies, and with Medical Board oversight, severely intellectually disabled patients were fed specially-made toffee (it stuck better in their teeth) dozens of times per day. Between 1947 and 1949, these "uneducable retards" were fed the caramel goop every day and by the end of the first phase, dozens had ruined teeth. (1)

The debate about whether carbohydrates, specifically sugar in candy, or vitamin deficiencies cause cavities tilted heavily to candy. The government's problem was that Swedes love their candy. They ingest more sugar each year than just about anyone, and even today 25 percent of that is candy. The official idea became to sound the alarm and then tell people to abstain - with a cheat day. Go to ICA and eat all the candy you want - but only on Saturdays.

America had plenty of sketchy 20th century experiments of its own, like LSD and STDs without consent, not to mention that eugenics movement that 1920s progressives loved, but we missed out on the whole 'making mentally disabled people eat candy' thing.

Instead, as the evidence began to switch away from vitamins and toward sugar on the teeth, companies pivoted and began to promote sugar-free alternatives. They had indifferent results at first, for the same reason people pay more for labels like 'natural' and 'organic' now. The American Dental Association even declared the ADA Seal would only go to sugarless products but that didn't really move the needle. Then in 1976, Warner Lambert rolled out an ad campaign for their Trident gum that really resonated with consumers; 4 out of 5 dentists recommended sugarless gum for patients who chew gum. 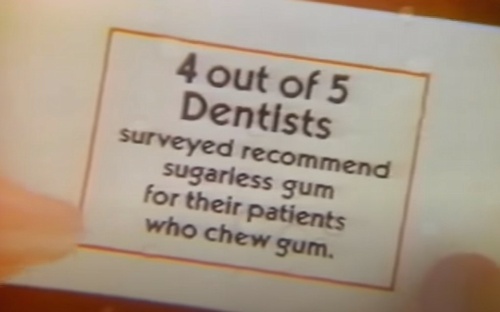 It didn't matter that the survey was even less scientific than most surveys, the ad campaign worked in a way that Doublemint Twins could not.

Below is the video I got that image from. I couldn't find a 1976 ad so I went with Peggy Fleming in 1981. Despite being a figure skater, she made the kids jump in the pool for gum. I'll be honest, I remember my teenage years vividly, and a lot of stuff about culture then that seemed normal is actually bananas to me now.

That 4 out of 5 dentists framing took off. The 'candy' that stayed on your teeth the longest, gum, became part of the solution to cavities and gum became part of pop culture in a way it hadn't been since Elvis Presley.

Before memes existed, we had jokes. And we used them a lot. If you were dealing with that one person who you knew just wanted to be contrarian you would ask if they were also that one dentist who wanted kids to get cavities. It even exists today, and sometimes memes collide, like that cat meme from a few years ago when it met that one dentist who refused to cave in to Big Candy and recommend sugarless gum because America. 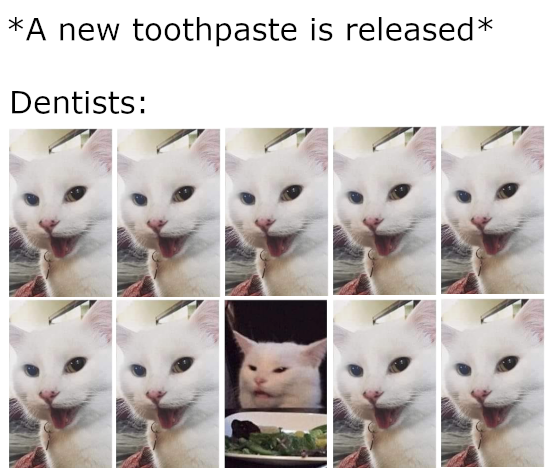 You may be asking how the joke switched from 4 out of 5 to 9 out of 10. There is a particular psychological reason why our brains read 4 out of 5 and then believe it reads 9 out of 10, so it becomes 9 out of 10 when repeated, but that is an article for another time.

The great thing about humor, or even being part of the lexicon in other ways, is that it educates without being preachy. It worked so well that I would be shocked today if someone today said they were eating sugar-filled gum, the same way I'd be shocked if some guy in a truck revved his engine next to a person on a motorcycle. It seems like a basic IQ test in both cases.

It would be a sad world if the Rocket Chemical Company had given up after 39 failures and not made its Water Displacement 40th attempt. There would be no WD-40 and half the stuff in my house would go untouched if they'd stopped with WD-39. Keeping kids from having a lot of missing teeth had challenges and some ethically uncomfortable ways to try and create something positive, but sugarless gum and Lördagsgodis are two things that are great now just the same.

(1) The results were not published for a few years and conspiracy theorists say 'industry did not like the results' (as if candy executives don't care if their children have ruined teeth) but since numerous papers followed it, the talk is just paranoia and the reality was that researchers wanted to have results for five years. Industry and dentists both wanted the study done because they both wanted to know the cause.
Science 2.0
More Articles All Articles
About