Children have a higher tolerance for thrills than most parents believe.  In 1989, when Disney returned to form with "The Little Mermaid", Ursula was among the scariest villains ever. She got impaled by the mast of a ship. That didn't bother kids a bit.

It's more often parents that are overthinking this stuff. I am not saying you should hand your 6-year-old a "Saw" DVD but for the second consecutive year of the pandemic let's stop the usual apocalyptic worry about sugary treats plus the concern about COVID-19. They'll be okay on both counts.

Here are 4 reasons why we as a society need to dial it down on Sunday, and maybe every day after that.

1. Kids need to cut loose. Some parent on the street is going to be berating their children to stay out of earshot of other kids, which deprives children of the chance to say 'cool costume' or whatever. Kids are terrible transmitters of the virus and so unlikely to get it that when I see a child on a ventilator in a Twitter image insisting that would have been prevented if everyone had 3 vaccines and wore masks to bed, it's enraging. It is also completely false. (1)

This has obvious repercussions. Gun deaths were up 30 percent during the first year of the pandemic, and the overwhelming majority of those were suicides. We have no clue what long-term effect this could have on kids but the short-term effects look pretty devastating. Kids are still going to be in masks on Halloween so relax. They are just as effective as people on airplanes pulling them down and pulling them up every time they take a drink lest an airline attendant shame them.

If you need more, the CDC has a great resource kit for parents about helping kids cope with the stress we may be heaping on them.

2. A night of candy isn't hurting kids.  Duane "The Rock" Johnson has a 'cheat day', where he eats whatever he wants, a break from his rigorous fitness and diet regimen. Your kids don't need that, most children are not exercising at that level, but a cheat day at Halloween is fine physically and mentally. Kids enjoy feeling like they are getting away with something, and letting them binge on candy does that.

No, they are not getting cavities from eating candy one night.

I have written about how the science debate was settled when it came to sugar versus genetics and the studies on psychiatric hospital patients is a Halloween story all its own, but the data are clear; sugar and dental care makes a huge difference. Swedes mitigated the sugar risk by eating all the candy they want, but only one day a week, and they have great teeth. The US instead came up with treats like sugar-free gum. Both approaches work so candy one day a year certainly isn't ruining health.

3. You can covertly manage COVID-19 risk. Most parents already have normal procedures for Halloween that don't seem like rules but really are. Those can be covert COVID-19 rules too. When my kids were smaller, each year a different team of parents would take kids around. Because the kids all knew each other, the circle stayed small, we'd wave to other parents as groups passed, kids are in costumes so they often wouldn't recognize other kids at night and didn't run off.  That works during the end of a pandemic also.

If you are concerned because there is high virus transmission in your town. PPE masks can be part of the costume. There are a lot of choices!

Or make your own.

If you saw the last Christopher Nolan "Batman" film, or read the comics, you may recall a villain named Bane, who basically wore a respirator. With a 3-D printer (if you don't own one, someone you know does, and they probably are looking for reasons to use it) you can make what I have, and the HEPA (high efficiency particulate air) filter I put in is going to protect you from a lot more than SARS-CoV-2. 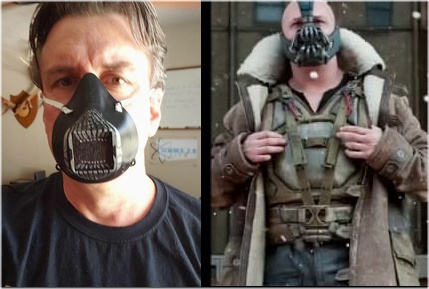 Me with my Bane COVID-19 mask and then Bane from the Batman film.

4. When you make it clear it's one night, kids get that. And you can even make it about public service.

Like adults, kids hate when there is inconsistency and random rules. The great thing about letting most kids have fun for a night is that they get it is one night. After that, limit candy to a few pieces a day. And you can even let them donate the stuff they don't like, like to The Candy Buy Back program which benefits our military.

It doesn't have to be the military, obviously, the kids can pick the charity. There is a 100 percent chance that if Goodwill or a food shelter gets a bag of candy to give away, they will be thrilled any day of the year.

And you can tweak what they keep. When I was a kid, the real score in the bags were cans of soda and packs of gum. A tiny Almond Joy was gone quick while soda felt like I got something huge, but was useless after 30 minutes. A pack of gum, though, would last me three days. And the nifty health hack in that is gum is almost always sugar-free, so not only is it avoiding sugar on teeth, it is actually cleaning them at the same time.(2)

I get that some will still be concerned this Halloween but the vaccines work and 2021 is the year kids can get back to Halloween fun. So let them get one night away from panic by making sure you are not wearing the wrong mask - namely this "Karen" one. 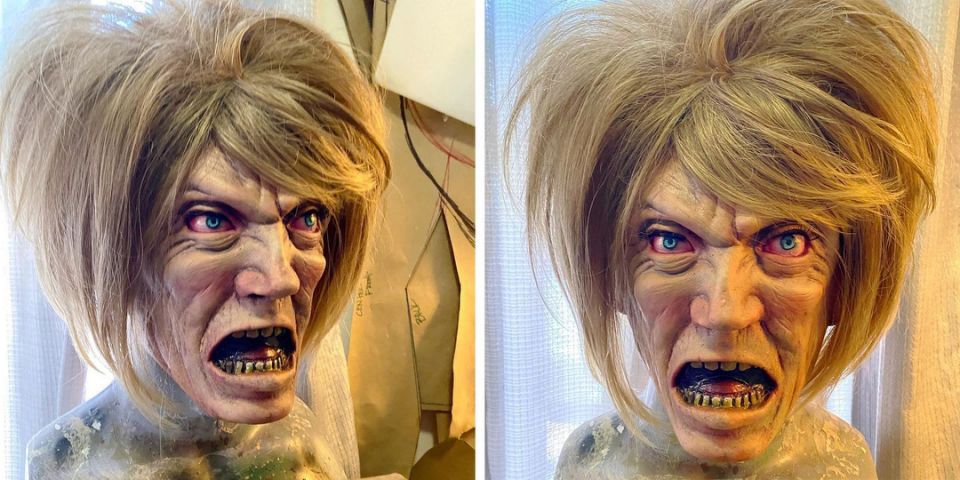 (1) California, where I live, is pretty bad about this. Before 2021 we were still the home of the anti-vaccine movement - we literally had to pass a law against 'philosophical' exemptions from childhood vaccines because so many elites on the coast, from Los Angles to Eureka, didn't want their kids getting autism. That shows in the militant behavior about masks, where they have so little confidence in vaccines (Big Pharma! Government collusion!) they tell kids if they aren't masked at all times grandma could die. Or worse, they could turn into Republicans.

(2) The American Dental Association even  endorses gum. Any with their seal has, according to them, been evaluated and shown to do one or more of the following: “reducing plaque acids, promoting remineralization of tooth enamel, reducing cavities and/or reducing gingivitis,” according to the ADA Science and Research Institute.