Hank Campbell
Last year it was announced that the Chinese government was going to pay for a third season of the Russian TV show "Better Than Us", a drama about an advanced AI robot that has a neural network bordering on free will, no limitations on killing, and drops terminology about family so often it could be in a Vin Diesel movie.(1) It was an odd move for a totalitarian regime historically afraid of culture they don't control centrally.

China had little interest in science-fiction in the past but "The Three Body Problem" by Liu Cixin may have changed that(2), and during the Obama administration their interest in American science changed also. Aided by 'a don't ask, don't tell' approach towards Chinese spying, China had long been sending students here, to get a good education, learn about their competitor, and return home but during the Obama years they began to actively recruit American scholars - and to pay senior academics to groom young PhDs for that purpose.(3)

Now they have taken the next step and joined Iran and Russia in making sure that the International Agency for Research on Cancer (IARC) of France, part of the World Health Organisation, keeps finding new chemicals to scare people about.

Not because they are worried about cancer, Chinese scientists know that nearly all IARC claims this century have been statistical nonsense (do you believe bacon is as bad for your health as plutonium?? No? But...but...epidemiology!) yet they also know that, unlike in China or Russia or Iran, activists have an outsized hold on science policy in Western countries.

Create fear and doubt among activists and you weaken a competitor. 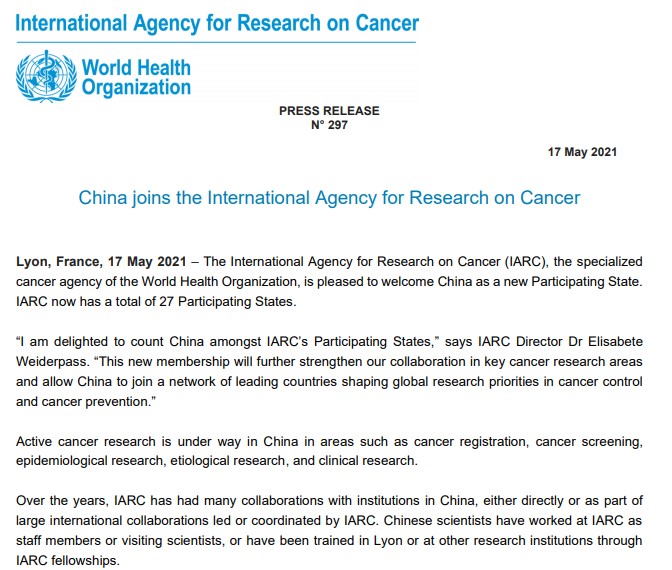 Russia already knew that. It was caught funding American environmental groups opposed to natural gas and agriculture - Russia's top two exports - using the kind of dark money strategy that Center for Media and Democracy/Sourcewatch would scream about if it involved Republicans. They said nothing because they were one of the groups that got $500,000 in dark money and refuse to disclose what company or country sent it. Russia mobilized European and American anti-science groups against modern farming, then slapped an organic sticker on more food than they could possibly produce, and enjoyed an economic windfall from French consumers who can't tell the difference. By undermining nuclear and paying to promote solar and wind in Germany, which need full-time always-on backup because it is unreliable, Russians make an extra billion a year on the spot market in that country alone.

IARC has already tried to statistically suggest 900 chemicals 'cause' cancer, so won't even more hurt nations that join? No. When it comes to their own countries, Russia, Iran, and China can just claim any chemicals that are statistically linked to cancer are not being used.(4) Are you going to argue with them? How? Tests don't matter, they dismiss evidence as Western propaganda - China made WHO repeat the conspiracy fable that COVID-19 was caused by American frozen food - just like they did with CO2 emissions until the evidence couldn't be ignored.

IARC is scrambling to maintain their legitimacy after a decade of scandals. They created new rules to block out any epidemiologist who had consulted for industry, but allowed not only consultants for activist groups, they let their activists work for trial lawyers while pretending to do impartial analyses of chemicals that the groups they worked for were getting ready to sue over. When it came time for a new director they picked another insider - someone literally married to an Old Guard member that caused their decline - rather than an outside voice who would bring back their credibility as more than resume filler for cranks already vetted by Ramazinni Institute or the NIEHS.

They are weak and that created the perfect opportunity for China to get its people inside there. Scientists may think their work is not political on a macro scale (almost all understand that getting grants often has little to do with the goals of science) but it is not only political, it is geopolitical. IARC is so focused on being anti-corporate they have opened themselves up to something that can easily become malevolent.

(1)The three laws of robotics it mentions are courtesy of Isaac Asimov in his 1942 short story "Runaround", which means they aren't laws outside one science-fiction milieu.

(2) Especially if the Chinese government does not understand how subversively anti-communist it is.

(3) One Texas A&M academic, Zhimin Lu, even got $14 million. China had pledged a total of $2 trillion for programs like their Thousand Talents Plan to get more science brains into the country.

(4) And Europe will be forced to believe it. China wiped out 16,000 coronavirus samples from the world's largest coronavirus lab in Wuhan while telling WHO to tell the world that the virus didn't originate in China, it couldn't spread human to human, and it was caused by frozen American food.

During the Kyoto negotiations, China insisted it was not emitting CO2 and that the plumes of smog seen from space were Western propaganda. The West self-flaggelated accordingly. Only when the evidence could no longer be denied did China suddenly become the world leader in CO2. Yet because they just have to say 'no' to any guidelines, they are allowed to hide behind developing nation status.

In return for the Obama administration turning a blind eye to their spying and bribery of American academics, China did give him a concession. They would be willing to discuss CO2 - in 2030. Which Democrats spun as a victory, since China had never even agreed to a date before.
Science 2.0
More Articles All Articles
About