Hank Campbell
Antibiotic resistance is a serious problem. Nature constantly evolves new ways to kill, which means pathogens will develop new methods of resistance to current treatments, but pharmaceutical companies also have little incentive to develop new antibiotics. Instead, they have obstructions when the U.S. Food and Drug Administration will require a billion dollars in expenses, 10 years of regulatory approval, and then grandstanding politicians will demand it immediately be generic and cost a dollar.

What to do? Nature may have created a new problem that forces a shift away from the 1990s 'everything must be hyper-regulated except alternative medicine' culture at FDA. The COVID-19 pandemic may mean a shift away from two decades of increasing costs and regulations that have saved no one, but have instead created a regulatory landscape so onerous to creativity that the generic company Mylan can charge an outrageous amount for an EpiPen and have no competitors because the market is rarely worth a new company spending a fortune to create an alternative version that will only compete on price.

Maybe some day soon drug companies won't have to spend millions of dollars and 18 months to get approval to change the font on a prescription label but until then, scientists have to get creative and re-purpose old stuff that has already survived the pre-coronavirus regulatory maze. One such compound is the cholesterol drug Cholestyramine. A new study found that it reduced resistance to Daptomycin, a bactericide used against Gram-positive bacteria(1) like Staphylococcus aureus since 2003. S. aureus can cause sepsis, osteomyelitis and the now famous methicillin-resistant Staphylococcus aureus (MRSA), which is why the World Health Organisation includes it in its "Critically important antimicrobials for human medicine, 6th rev." list. 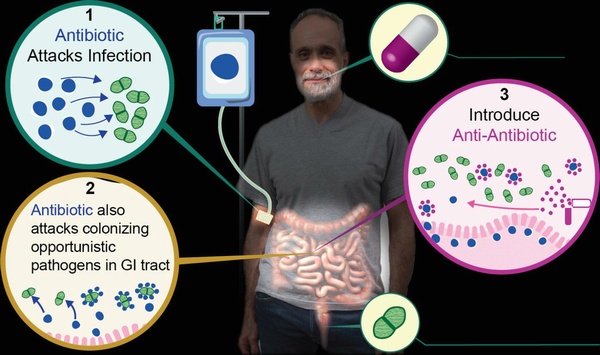 Right now, resistance to Daptomycin is quite rare but nature is working to get better at it - and can even already beat it. Lechuguilla Cave in Carlsbad Caverns, New Mexico, has 4-million-year-old bacteria that are naturally resistant to daptomycin.  A way to reduce fecal shedding of vancomycin-resistant Enterococcus faecium, which are also resistant to Daptomycin, by 8000 percent, as this study found, is important, because resistance is coming.

We just can't get too excited. This was just in mice and animal studies, like Harvard School of Public Health epidemiology claims about food and chemicals, need to be taken with a grain of salt. If I had my way, I'd make NIH force grantees getting funded for studies involving correlation or mouse models to have EXPLORATORY watermarked in red on each page so New York Times journalists and environmental lawyers can't continue to pretend they don't realize mice are not little people.

But plenty of great breakthroughs started out as exploratory so this merits follow-up. Sure, we can be smarter about using antibiotics - the first time I saw anti-bacterial soap on store shelves in the 1990s I noted it was a bad idea doing nothing but making rich people feel better while sending medicine into water supplies - but no matter how smart we are nature will keep trying. So new discovery is key but combination treatments that are already approved are cost-effective.

The war between nature and humans is never going to be over, so here is hoping combination drugs are just a temporary measure and the Biden administration will learn some COVID-19 lessons and not treat drug companies as the enemy and saddle them with more regulations, like Democrats did the last two times they were in the White House. That way we may have old antibiotics lasting longer thanks to combination "anti antibiotics" like this available, but we'll also have smart chemists and biologists in the private sector being rewarded for inventing new ones.

(1) Named such after the microbiologist and medical doctor Hans Gram, who developed the staining method in 1884. Bacteria that turn blue when stained are Gram-positive while red are Gram-negative. Staphylococcus aureus is one example of Gram-positive bacteria.
Science 2.0
More Articles All Articles
About