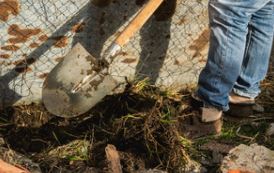 European scientific decision-making is often overtly political and that can lead to decisions which defy common sense.

In some countries they want food waste separated into its own garbage can but people can't use plastic bags, even if modern science has created a plastic that is just as compostable as the food.

In some countries they can.

There is no way for science to Brexit so companies, researchers and even pro-science politicians remain stymied in parliament-style governments, which must cater to numerous constituencies, often in conflict with each other.

Without bags, fewer people are going to separate food waste, which government mandates they do. People don't want to clean the garbage cans and then have rotting garbage in their yards. If they don't clean them, they will have infestations. So instead of doing either they become "casual criminals" and don't separate food at all, even if they claim on surveys to care about the environment.

Enter compostable plastic bags to line the cans. They have led to better uptake by the public, but now activists say they are not as biodegradable enough.

Microplastics - the probiotics and endocrine disruptors and PM 2.5 of 2019

Plastic in the oceans is a concern if you care about the environment, which everyone across the political spectrum overwhelmingly does. Yet it's not the threat level it's been made out to be. Once it was revealed that estimates about ocean plastic were derived from a small analysis of fishing nets funded by environmental trial lawyers, the public got a lot more skeptical about it.(1) Pictures of garbage islands turned out to have only relative trace levels of plastic. No one wants more, of course, but it seems silly to lobby against disposable biodegradable bags based on that.

Lacking a true plastic problem in biodegradable bags, environmental groups defined deviancy down. All the way down to invisible levels. Microplastics are the problem, they began to promote, even if it takes an electron microscope to detect said plastic. And if microplastics are a real problem then biodegradable plastic isn't really biodegrading at all because plastic compounds can still be detected. And that means the biowaste facilities environmentalists promoted are harming the planet.

None of that is true.

The intent behind composting is to improve the environment by removing food from garbage dumps. In practice it has been silly politics, but some people like to virtue signal piles of rotting garbage in their yards. When it has become government policy, though, it has become ridiculous. In the introduction to Science Left Behind I detailed how when Democrats last took control of Congress, in 2007, their bold environmental initiative to satisfy donors was to ... get rid of styrofoam containers and plastic utensils. Their 'Green The Capitol' campaign was a huge bust. Compostable spoons melted in soup, no one trusted the containers, knives broke, requiring  more of them to get through a meal. Then the food waste had to be shipping on emissions-belching trucks to a remote composting factory - all for a huge increase in cost. Four years later it was wiped out, at the request of the Democrat who ran the House eateries.

And that was before the advent of microplastics. Now the very thing that environmental groups had pressed to get in 2007 - biowaste processing - is causing harm, they now claim.(2)

The good news is that the same specious wishful thinking that led policy makers to believe it was a problem is the basis for claims it is harmful. Which means scientifically literate people should debunk it. Because it is simply homeopathic thinking to claim Germany is introducing billions of plastic microparticles into the environment and we can't see them, or detect them without expensive equipment, but they are killing nature.

Except they aren't. There are trillions of bacteria in your stomach alone. Activists use cosmic numbers to make something sound like a problem, but it defies both math and physics to claim a billion particles of plastic that biodegrades in three months is a concern.

Is the plastic biodegradable or not?

Technically everything is biodegradable given enough time but for European purposes it is considered such if it disintegrates within three months and is 90 percent broken down within six. Therein lies the political rumpus. What if a composting plant doesn't need to keep it for six months? What if the plant uses anaerobic composting rather than with oxygen?

Like organic food lawyers who say food can't be labeled organic if it uses no soil at all, it feels vaguely nitpicky to the rest of us when environmentalists claim that the gas used or emitted is what matters most in composting, but on some level this is religion and religions have tomes. For organic food, their World War II-era bible talks about soil health(3) and to literalists that means if a food uses no soil it isn't canon.(4)

So it goes with composting. Once it became law there was no way to raise money advocating for it, so to keep their $2 billion per year in revenue environmental groups must find a new war for their army to fight.

Parsing that certain microorganisms make compositing legitimate, and only one temperature or one length of time is really biowaste processing, is not science, it is a one-size-fits all approach in a situation where all sizes fit all.

Biowaste processing isn't needed at all, it is an intellectual placebo that helps little; it certainly isn't necessary to further mandate that only using bag-less waste separation is environmentally sound. As has been shown, if you solve one problem a new one will be manufactured. In this case the people opposed to all modern science and technology now just focus on the biowaste plants themselves. And they will latch onto claims about microparticles the same way they have latched onto claims about vaccines, endocrine disrupting chemicals, and natural gas.

(1) The same way they did about "it takes a gallon of gas to create a pound of beef" and "40 gallons of water to get a chicken egg" claims. Unfortunately they are still trotted out far too often by media who rely on activist press releases.

(2) Activists also used to promote natural gas, until it got popular, then they were against it. They are in a war of extinction.

(3) Albert Howard in An Agricultural Testament (1940) which stated "the health of soil, plant, animal and man is one and indivisible" and thus became scripture to modern dirt farmers. Howard was literate so he would likely object to such modern rigidity to words he wrote by the light of a candle.

(4) The National Organic Standards Board, the industry lobbyists and farmers on the USDA panel that determines what synthetic or natural ingredients and processes can have the organic label, disagreed with the dirt only contingent and voted to allow hydroponic plants to be organic certified.
Science 2.0
More Articles All Articles
About