Hank Campbell
Dermatopathologists, skin cancer specialists, may be ordering additional tests or second opinions out of caution but they may also be thinking about checking off boxes to prevent malpractice lawsuits.

In the United States, with the existing "Wild Wild West" of litigation due to blocks of tort reform, it is routine for lawyers to sue doctors, hospitals, and insurance companies. Using claims that they "hold corporations accountable", malpractice lawsuits are so routine it's rare not to have one: 74 percent of obstetricians and gynecologists will face malpractice claims by age 45, which means nearly all have been sued by lawyers after only 15 years in practice.

Lawsuits and malpractice insurance lead to higher costs but the defensive medicine costs to prevent those are even greater. Even if a physician knows a test is unlikely to be valuable, they may need to check off all of the boxes to reduce liability. This leads to less treatment of patients, not improved outcomes. Meanwhile, even though 78 percent of all claims don't find fault, lawyers can still claim doctors have been 'charged' with malpractice, which sounds like guilt to the public. 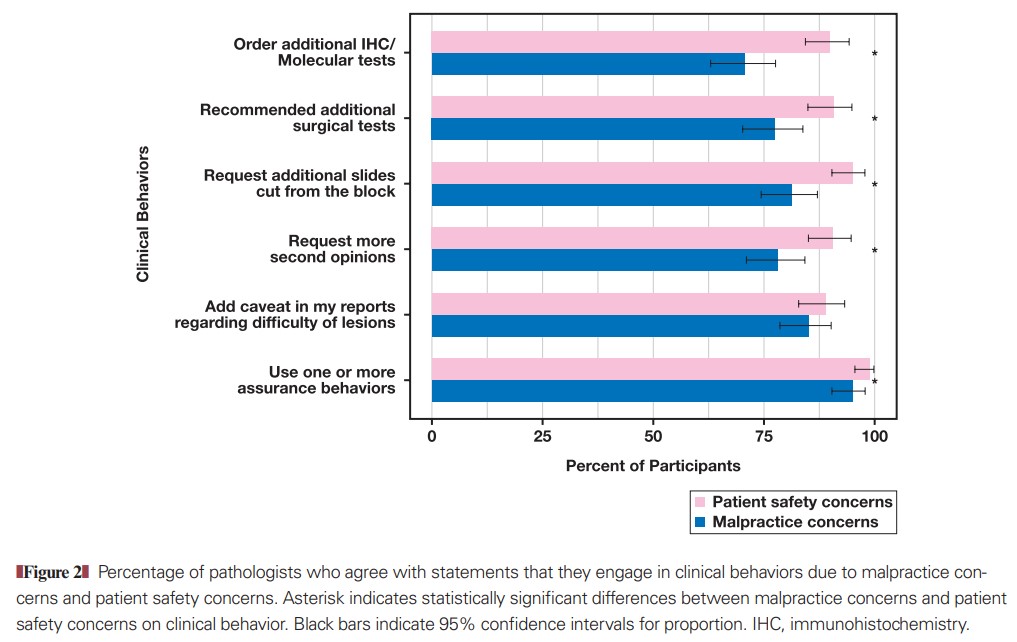 And since this was self-reported behavior, it is possible that some provided the most professionally desirable answers rather than the honest ones. No rich person would respond on a survey that they'd hoard toilet paper, penalizing the poor who must wait until they're paid to buy goods and finding things out of stock, but that's what happened during the early stages of the coronavirus pandemic. There was no way to control for biases in self-reported motivation, and there was know way to know all reasons that could motivate physician behavior.

Claims of missed skin cancer diagnoses have led to dermatopathology having the second highest  malpractice verdicts, exceeding an average of over $1 million, with misdiagnosed skin cancer being the most common reason for these claims. Since a physician can be "charged" with malpractice in the public sphere even if they did nothing wrong, it is likely that doctors are ordering additional tests and consultations to protect themselves from liability.

With insurance premiums up on average over 300 percent since the onset of the Affordable Care Act, that means we are all paying the price when lawyers get rich.
Science 2.0
More Articles All Articles
About