Hank Campbell
President Biden is using his Occupational Safety and Health Administration (OSHA) agency to mandate vaccines for companies - by saying they need it to protect workers' safety.

The administration has been a fan of executive orders, where possible, and then regulatory fiat where not. Whenever possible he does not seem to want his former branch of government - Congress - involved. The problem with his strategy, especially worrisome for a former member of Congress, is he knows that is constitutionally suspect. Yet he believes legally he can. Thanks to the 'Chevron deference' ruling at the Supreme Court in 1984, it became possible for agencies to de facto enact legislation without needing Congress. They simply state a regulation that acts like a law is necessary for their mandate. It has been open season on science and public trust in science ever since. 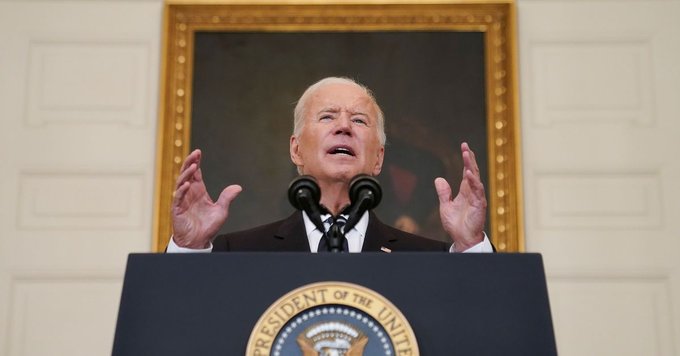 Regulatory fiat has been stretched to the point of caricature. The US Centers for Disease Control and Prevention obeying President Biden and trying to tell landlords they couldn't evict people who didn't pay rent because it would increase disease risk, was gibberish, but the White House still tried. He barely failed to put an anti-gun activist in charge of the Bureau of Alcohol, Tobacco, and Firearms, to accomplish there what the Obama administration did to the Nuclear Regulatory Commission, no lawmakers needed.

Now they are using OSHA to try and create legislation they know Congress would not pass. A vaccine mandate.

The Biden legal team say they have precedent in the 1905 Jacobson v. Massachusetts case. The Supreme Court ruled that the Cambridge, Massachusetts Board of Health was allowed to mandate and enforce vaccination for smallpox during an epidemic.

All settled then, right? Well, no. That decision was also before the Supreme Court, guided by progressive lion Oliver Wendell Holmes, made eugenics into federal law, including sterilization of people with disabilities and women deemed promiscuous. It was before Josef Mengele and proof of the Holocaust and facts about medical experimentation tantamount to torture and murder in German-occupied lands during World War II.

The Doctors' Trial, part of the overall Nuremberg Trials after the defeat of Germany, accused 23 people of murder and torture using medical experiments on concentration-camp inmates. At the conclusion, 7 were sentenced to death by hanging. The U.S. Supreme Court declined to review the case so the executions were carried out. And from two physicians and a judge at the Doctors' Trial, we got the Nuremberg Code, which became to some, "the most important document in the history of the ethics of medical research."

The Nuremberg Code stated what seems obvious now but was not standard then. "The voluntary consent of the human subject is absolutely essential." The individual Hippocratic concept of Primum non nocere (first, do no harm) was no longer enough.

In 1966, informed consent was made international law in Article 7 of the United Nations International Covenant on Civil and Political Rights.

Does voluntary consent apply only to clinical trials? Can government compel people to eat broccoli? Can they compel an abortion?

Can they compel a vaccine?

The issue is not the vaccine. It works and everyone should get it. That is different than letting government force it on people. The Biden administration says the Occupational Safety and Health Act of 1970 does give him the power to implement an Emergency Temporary Standard if he finds it "is necessary to protect employees" from danger, like COVID-19. Does that mean he should try and use it?

What about the Nuremberg Code? A lot of people who are never going to take the vaccine anyway have invoked Nuremberg, sometimes with so little clue about what it was that one sub-literate moron on television claimed it caused World War II. The Nuremberg Code covers medical experiments, like clinical trials. Those have already been done with these vaccines and they were done ethically. A vaccine mandate is not a clinical trial. When California had more unvaccinated kids than the rest of the US combined, for "philisophical" reasons (wealthy elites on the the entire west coast disproportionately believe vaccines cause autism) only a few short years ago, Governor Jerry Brown had to be convinced to abandon his sympathies for San Francisco Bay area parents and sign a law banning arbitrary exemptions. But he did not mandate vaccines.

President Biden is doing something even California, arguably the most social authoritarian state in the nation, has not tried. That's risky.

So we will have to see if this holds up. The top demographic lined up against the Biden mandate are not those hillbilly Republicans urban journalists love to dunk on, it is unions like cops, nurses, and firefighters. Black men in New York City are under 30 percent vaccinated and have no intention of changing that.

He's going to fight people of color and unions in court? Tangling with them might be a bad idea for Democrats when it is time to vote in 2024.

Get vaccinated. It's safe. It works. The math and the science show it. But if you have constructive thoughts on the Biden plan, please let me know in a comment.
Science 2.0
More Articles All Articles
About