Hank Campbell
From herbicides to vaccines to pollution, there is a science consensus but there are still pockets of people who refuses to accept them. They are bolstered by disinformation campaigns. When it comes to food or what car to drive, the difference is higher cost or kicking the pollution can down the road for future generations to solve, but vaccine denial is harming people with immune issues right now.

Surveys won't solve that but they can at least point to solutions. You may be skeptical and you are not wrong. On surveys few people admit to being anti-vaccine even though a few years ago the coast of California had more philosophical exemptions than the rest of the country combined. When a law was passed to refuse vaccine exemptions in non-medical cases, wealthy coastal elites simply found doctors to say it was medical necessity. Vaccine deniers say they are pro-choice or anti-corporate, not that they are anti-vaccine. And they may believe it, because they also embrace alternatives to medicine and organic pesticides as superior to the science consensus, all while saying the science is actually on their side.

When the C.S. Mott Children's Hospital National Poll on Children's Health at the University of Michigan released their nationally-representative report a few months ago, of 1,977 parents with at least one child ages 1-18 nearly a third said they were not planning to get their child the flu vaccine despite its benefits, such as reduced severity if their kids do get flu and protecting people who medically cannot get it. 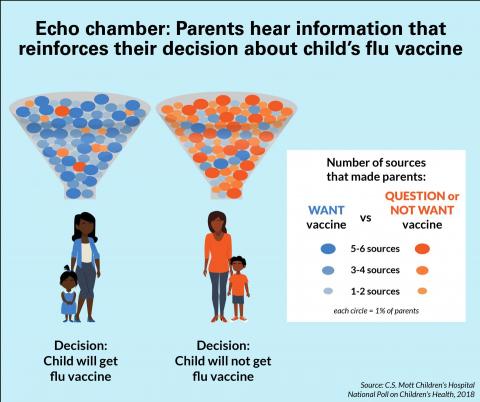 Among parents who decided to get flu vaccine for their child, the most common source of information that made them want the vaccine were doctors, nurses, etc. Among those who chose not to protect their children, the most common source of disinformation was sites like Facebook, where vaccine denial groups, organic industry trade groups, and supplement sales companies all support each other in claiming science is wrong and more "natural" methods are better.

And there is a lot of disinformation. Though parents getting vaccines for kids just mentioned doctors, the vaccine denial community was deep in sources for what they claim. Parents who refused to get the flu vaccine for their child reported seven times as many sources that made them question or not want the vaccine as parents could report sources in support of vaccination. It's hard to fight a firehose of disinformation.

When it comes to science denial, volume sells

The sheer volume of negative information may make it less likely that they will change their minds, said the report authors. This is a challenge in other fields as well. While few scientists want to openly support the safety of chemicals or agriculture and have their homes and university departments threatened to implicitly defend companies producing products, it is easy for activists to find high-volume opposition outside the science community. The New York University Arthur L. Carter Journalism Institute routinely collaborates with organic industry trade groups and supplement companies under the guise of being investigative journalists and much of the public may regard them as credible based on the New York University brand. They won't know that the quickest route to becoming a visiting fellow there or the University of California San Francisco is to write an article in a newspaper criticizing the science community.

Like beliefs that regular food is harmful but organic food is healthier, uptake of the flu vaccine is an outlier. Though California, Washington, and Oregon have alarming denial of MMR vaccines compared to pro-science states like Alabama and Mississippi, when it comes to the flu vaccine a lot of people and kids in all states don't get it. In the last flu season reported, fall 2017 to spring 2018, 180 children died from influenza, a modern record. The flu can kill but over 40 percent of those deaths were likely preventable because the kids had not received the vaccine. It's not certain that those parents were vaccine denialists, if may have been cost or convenience, but had their been a stronger cultural information campaign it might have helped.

Science and medicine doesn't yell and scream the way activists in opposition do, but that is for the best. While 100 kids lost is a tragedy, the science community also needs to remain credible and serious for the 30 million kids that can still be helped. And getting in shouting matches with the Zen Honeycutts of the world only drag the science community down.
Science 2.0
More Articles All Articles
About