Hank Campbell
Meleah Geertsma, a senior attorney in the midwestern US for Natural Resources Defense Council (NRDC) - yes, they have so many attorneys they have titles like "Senior" and for geographical regions - says they are suing the federal government...again. This time over natural gas.

Their complaint is that the government rolled back the previous administration's increases, basically some expanded parking space, near national monuments and is allowing development again. And development may mean clean-burning natural gas, which NRDC now claims causes cancer.

You read that right: they think Trump is literally giving Americans cancer and increasing global warming, because the Department of the Interior rolled back the Obama administration's Methane and Waste Prevention Rule., which hadn't even done anything Somehow, despite it even only going into legal effect a few days before the Obama administration left office, and accomplishing nothing, Geertsma writes, "The rule is already curbing smog-forming, cancer-causing, and climate-warming air pollution and recovering more revenue for taxpayers."

That was in something they call Expert Blog. Clearly the only thing that gives you expertise at NRDC is raising money. This shows no knowledge at all of any science. 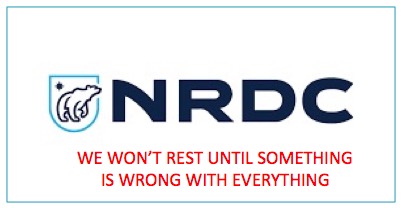 Credit: Dr. Josh Bloom from the American Council on Science and Health

How does trace methane give you cancer?

It doesn't have to, you can sue anyone over anything in America, and this is another example of a "sue and settle" effort by NRDC that has no basis in fact. They instead need to pay their staff attorneys and the way to do it is to file a lawsuit against the government and get a settlement for attorney fees. Then they can raise money declaring how they stuck it to a Republican.

To make their case, their attorney acts about emissions the way their donors feel about medicine; they embrace alternatives like homeopathy. In a homeopathy world, u-shaped curves, where health is impacted by extremely high doses or one molecule but not in between, you can have endocrine disruption and link methane to cancer. It just can't happen in the actual world of science and medicine.

How does it increase global warming?

Concern about carbon dioxide in high quantities is a legitimate hypothesis because it is persistent. Methane? Nope. But NRDC is in the business of scaremongering and lawsuits, not science, so all they read is that methane has 23X the warming effect of CO2 and write a blog. That it disappears quickly and only trace amounts are released is well known.

To believe an NRDC attorney, you have to accept that corporations are simultaneously greedy and evil but at the same time they are releasing their money into the atmosphere. These two notions are in opposition to each other. If you donate money to NRDC, you may lack the clarity it requires to see that.

How do more regulations save taxpayers money?

Like everything NRDC advocates, bans on natural gas will really only be sticking it to poor people and minorities.  America leads the world in science and technology. People get medicine in developing nations because we overpay. People have more affordable energy if they use natural gas hydraulic fracturing (in the case of Germany, they instead buy it from Russia) because an American wildcatter made it viable. Why does a trial lawyer for an environmental group want to  hurt the poor by making energy more expensive?

The wealthy elites who control NRDC and fund it will be unfazed by either the cost or the logic. They once embraced natural gas, before it was widespread, because they are in the "anti" business. Now they embrace solar and wind, despite the fact that hundreds of thousands of poor elderly people would freeze to death in their homes this year if Americans ever listened to NRDC about anything.

How will corporate welfare for solar and wind companies save us money? It doesn't, letting people spend less on energy saves us money, in the short and long term. Affordable energy is directly linked to improvements in agriculture, health and culture. When people spend less of their money on basic needs they spend more of it on schools and museums and libraries.

But NRDC is probably against libraries. It will make people too smart to donate to their litigation efforts.

Hank Campbell is the President of the American Council on Science and Health and Founder of Science 2.0. He did not receive funding from Big Burp or anyone else to write this article.
Science 2.0
More Articles All Articles
About