Hank Campbell
In 2002, Berkeley Professor Tyrone Hayes got a paper titled "Hermaphroditic, demasculinized frogs after exposure to the herbicide atrazine at low ecologically relevant doses" published in Proceedings of the National Academies of Science.

In it, he claimed this common herbicide was changing the sexuality of frogs, an indicator species.

Though it was less than 20 years ago, it might as well have been a lifetime. PNAS published the paper, but it turned out to have been hand-walked past peer review by a member of the NAS, using a courtesy policy PNAS changed only after I revealed it in a Wall Street Journal article. Yet EPA worried there might be something to it at the time, and created a special scientific panel to study it, but Professor Hayes refused to give them his data, saying he didn't trust EPA. His work was never used in their assessment because EPA doesn't accept .gif images as scientific evidence, and it has never been replicated.

But before Hayes refused to show his data, EPA took the paper seriously and created an Atrazine Monitoring Program to sample drinking water in communities where atrazine is often used, to be sure the Safe Drinking Water Act was protecting those communities. After 17 years and no issues, EPA is ending it so they can do something important to protect the public with that money ... and that is why environmental lawyers, who seem to have been preparing to go after atrazine once they were done milking claims about glyphosate, flew into action against science. Again.

Center for Biological Diversity is a prominent sue-and-settle group, so the money that doesn't go toward lawyer salaries and their bonuses goes toward lying about scientists. EPA has never suggested atrazine be banned, they even investigated it twice outside its normal safety re-registration, the second time at the insistence of California Senator Barbara Boxer and President Obama after NRDC demanded payback for its get-out-the-vote campaign. EPA scientists found nothing to be concerned about. But on Twitter, fact checking is scant.

They mobilized their social media bots to claim EPA was getting rid of the safe limits on atrazine allowed in drinking water when in actuality nothing has changed.

So there is no confusion; only the special monitoring program (AMP) is being discontinued.  Atrazine is monitored as it always has been under the Safe Drinking Water Act. Anyone who claims otherwise is selling you something.

The program is being discontinued because the 3 parts per billion they wanted to be sure it didn't exceed is still orders of magnitude below safe levels. Which means the 1 ppb on average they really found is ridiculous to keep spending taxpayer money to watch.  Even homeopaths would have to feel like 3 parts per billion is a ripoff, and homeopathy is synonymous with "placebo."

If you aren't familiar with the term "homeopathy", it is essentially the placebo effect. It posits that a molecule of something will have an impact on you because "water has memory.' Its creator 200 years ago, Samuel Hahnemann, believed that if you mimicked the symptoms of a disease, you prevented the disease. So if you consume a substance that induces a symptom you prevent all diseases that have the same symptom. And the more diluted the substance, the more powerful it became. Within reason, or else you are just selling water.

It's obviously nonsense but the usually staid National Institutes of Health, which can't be too dismissive about homeopathy because the Clinton administration forced them to fund the National Center for Complementary and Alternative Medicine in the 1990s, came as close to ridicule as they can, noting “several key concepts of homeopathy are inconsistent with fundamental concepts of chemistry and physics”.

If I tell you that you only needed to read the first letter of this article to "get the full effect" you see how ridiculous the whole notion is. It's stuck around for 200 years because some people trust magic more than science, but it's never been more than nonsense.

Actual atrazine levels are orders of magnitude below No Affect Levels, which are well above the possible dilution level

Yet that is what environmental lawyers want us to believe about a weedkiller; even at 3 parts per billion (ppb), which is like worrying about one second every 150 years. They are trying to falsely claim that EPA is getting rid of a safe standard but they are just deceiving their political base. EPA is doing nothing of the kind. Instead, after 17 years of finding no harm with the Atrazine Monitoring Program, they are going to use the money for something where it might help. Not only did they not find instances over 3 parts per billion they only found 1 ppb. You absolutely must believe in homeopathy to believe that has an impact. It is so far below the No Affect Level as to be meaningless for critters or people. But the No Affect Level itself can't even be achieved in real world conditions.

We've all done experiments where we tested dilution levels of salt or sugar to see how much we could stir into water before the water just couldn't take any more and it solidified at the bottom - water solubility. Here is the water solubility level of atrazine and the no affect level, which EPA forced the company that makes atrazine to pay for under EPA guidelines. Keep in mind that these levels are orders of magnitude higher than the EPA has found - which is just 1 ppb on average. 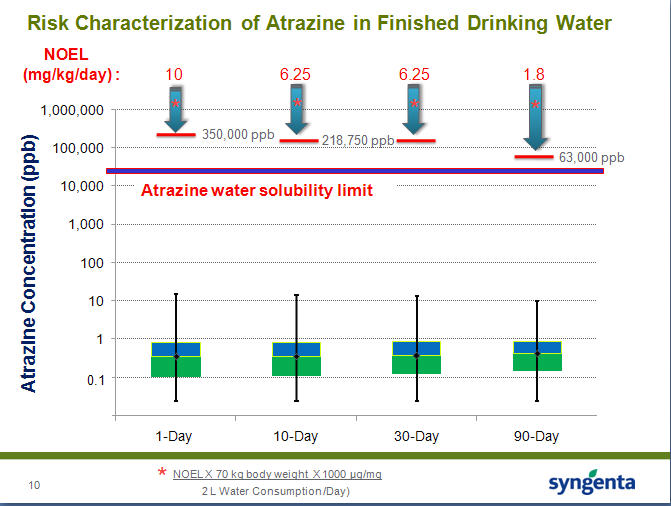 As you can see, the 90 day no affect level is 63,000 ppb whereas the water solubility is just over 10,000. And the EPA has been finding 1. After the 2002 mystery claims in PNAS, EPA created their special monitoring program to insure the Safe Water Drinking Act was being obeyed and after 17 years of study found it has.

EPA wants to do something important with that money but environmental trial lawyers want a special EPA panel so they can suggest atrazine is harmful. After all, 'if it's not harmful, why would EPA have a special monitoring program for it?' needs to be in their argument for that San Francisco jury they hope to get.
Science 2.0
More Articles All Articles
About