Hank Campbell
A new analysis finds that if there ever was a "Beepocalypse", it hasn't been during this century.

Using data since 1961, they found that the number of managed honey bee colonies has risen by 85%. Managed colonies are the only way to create reasonable estimates, that is how surveys of losses are done annually, but in the past activists trying to create a new fundraising target leveraged blips in averages to claim that a Colony Collapse Disorder was being caused by...farmers.

You know that averages are created so that high and low outliers are not exaggerated in importance. Anyone scaremongering that a number on a survey is lower than the average of previous years is insulting the public, but that is what happened. Anti-science activists also ignored that bee colony collapses - inexplicable die-offs of bees in large quantities - have been recorded for as long as records have been kept. Over 1,100 years. Ask a bee expert what the top three perils bees face are and they won't say pesticides, they will answer 'varroa, varroa, and varroa.'

Nature is out to kill everything, including us with COVID-19 today and bees with parasites forever. 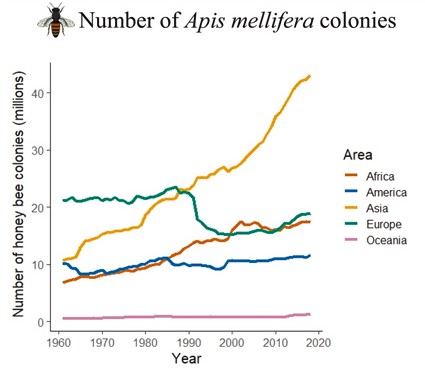 The big jump has been in Asia, which has lower environmental standards and more pesticide use than anywhere else in the world. Good luck protesting a communist dictatorship, activists.

How successful has nature been in killing bees? It's actually hard to say because no one can count them. Over 99% of bee species don't even have hives. We actually don't even know how many bee species there are.(1) So we use a proxy and do surveys of beekeepers because they count how many colonies they have and you can infer how many bees are in each - on average. Human involvement in their beesiness has been good for honeybees. The cow is not extinct only because it was domesticated, and honey, not to mention on-demand pollination for crops like almonds, is big business. That has meant long-term security for honeybees.

That is why claims about a beepocalypse brought about because farmers make food affordable, whether from Joni Mitchell decades ago or Jenny McCarthy recently, made little sense. Any sciuence literate commercial beekeeper knows the problem is not agriculture. When your livelihood is bees, you want to keep them alive. No one would be happier than commercial beekeepers if activists were right and all it took was banning some chemical and bees would never die. Yet they will die without help. Science keeps bees alive. There is very little (legitimate) organic honey because the losses are too great due to natural deaths like parasites. If tools to fight nature weren't needed, the market would have spoken and beekeepers spending money on killing diseases in bees would stop spending money and everyone would just sell overpriced organic honey.

No one in any agricultural field spends extra money so activists in academia and at Natural Resources Defense Council can blame them for everything. They spend the money because it is the only thing that works.

That the bee decline was manufactured is not really news so activists have recently pivoted - we now get claims that honeybees are killing wild bees (all those ones that can't even be counted, using proxies like neighborhoods), and even that other bees are 'behaving' differently after they are forced during experiments to sit in a cloud of pesticides for 12 hours. Since the lifespan of a bee is weeks, 12 hours is decades on human scale. You would behave weird too if that happened. How do activists and the scientists who want to be paid expert witnesses in the lawsuit know bees are acting differently? You'll never get rich asking awkward questions like that.

The good news is that bees are not in any extinction risk. We have more die in truck accidents while they're being shuttled to almond farms than die due to modern pesticides.

(1) If journalists had been trusted guides for the public, they'd always have noted that there are over 25,000 species of bees, just over a handful even have hives, so picking a bad year for one species and declaring death for all was silly. Instead we got dirges about how the food system would collapse. That is not true and never has been. Sure, they are important in something like almonds, but for most foods there are tens of thousands of other species that pollinate.
Science 2.0
More Articles All Articles
About