They are able to effectively spread their message using keywords to hijack the discourse against science. Unlike with writing, which requires some literacy to create or understand, video has no barrier to entry and someone legitimately seeking answers won't know they're dealing with a crank until they start watching the video and witness the slow descent into crackpottery. By then an ad has made sure the crank got paid. Experts aren't making a lot of videos, because experts are scientists, they already have real jobs doing science, while conspiracy nuts are directly making money creating content.

Anti-agriculture videos, for example, are always trotting out the same people(1) all claiming Monsanto or whoever is trying to control our food supply, and they do it by co-opting the language of science to use against science. Chemtrail conspirators also co-opt the language of science, using terms like geo-engineering. 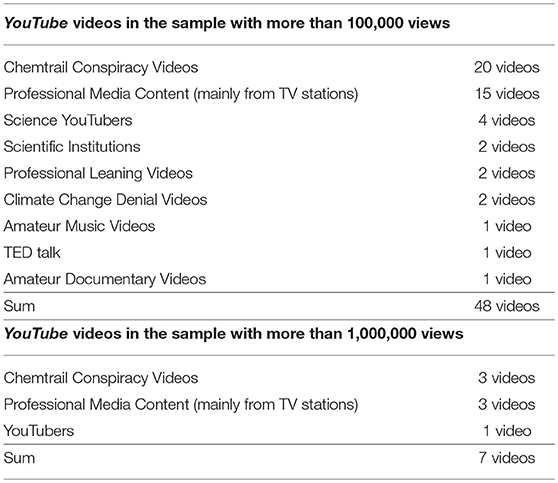 Since YouTube is overwhelmingly used by young people, these groups are trying to groom the next generation of believers, and it seems to have worked for the groups monetizing their efforts. Supplement sales continue to go up, organic food revenue continues to go up, food, energy, and medical science are dismissed with "follow the money" whispering. On the chemtrails side, there is much less real success. No one has stopped flying planes.

One obvious solution would be to create more legitimate science content but video is expensive and scientists who may not be great communicators, or who prefer others to talk about their work, won't do it.(2) If I go to a foundation and tell them I want to make science videos, I will get crickets chirping in response. Videos are a very expensive way to reach 100 people unless you are exceptional at it or engage in the kind of tactics conspiracy theorists engage in.

Amateurs with conspiracies about science not only aren't afraid of institutional or corporate science videos, they hope for them. It gives them another way to talk about how conspiracy theorists are right. FOIA documents show a vast cabal of anti-GMO environmental groups, lawyers, and journalists all conspiring to promote concern that a company asked scientists to give talks - or colluded to promote studies supporting their clients.(3)

It shows the ethical problem the science community has. No one, not even at the worst corporation or trade group, will engage in the kind of behavior anti-science conspiracy theorists routinely do.  And if the numbers of the authors behind a recent paper on the ease of conspiracy theories on YouTube are correct, 2 billion hits per month, the pro-science side is gradually being left behind. On climate issues, food, energy, medicine, everything.

No one really knows how YouTube works - Google does that to avoid groups gaming the system - but for groups with nothing to lose and a lot to gain, they can throw enough techniques at the wall and see what sticks. Scientists can't do that, because real jobs get in the way.

(1) A small sample would be Marion Nestle, Bill McKibben, Naomi Oreskes, Zen Honeycutt, organic industry trade groups like US Right To Know and their political allies at the  New York University Arthur L. Carter Journalism Institute. Heck, the University of California San Francisco even has a website ("Industry Docs") created and managed by the organic industry.

(2) And Netflix is overrun with conspiracy documentaries about food (2) - trial lawyers and organic industry trade groups will happily fund them - but conventional companies are not going to fund anything of the kind, they are dominated by corporate marketing, and corporate marketing wants to control deliverables. No one in science will agree to that.

(3) One of the UC San Francisco organic industry-run groups mentioned above, IndustryDocs, using their go-to discredited former journalist, even tried to claim my name was "all over" documents about a biotech conference held by another pro-science nonprofit. Yet when I looked at these supposed "documents", they turned out to be emails my name was "all over" because they asked me to give a talk. There was no corporate sponsor, the nonprofit didn't pay me to be there, they didn't pay for my hotel, they didn't even give me gas money, My emails were with the other panelists in the group I was asked to moderate.

Yet he is not paid to find truth, he was told to create a Twitter claim and provide a link to make it seem like it was real. The science and science journalism community simply won't engage in lying and fraud that way, so we are harmed.
Science 2.0
More Articles All Articles
About