Your 'Epstein Didn't Kill Himself' Friend - Conspiracy Believers Are Often Not Crackpots About Everything
By Hank Campbell | December 4th 2019 02:31 AM | Print | E-mail

Hank Campbell
"Epstein didn't kill himself" is a conspiracy meme that has been everywhere lately. If you are not familiar with the name Jeffrey Epstein, he was a billionaire and convicted sex offender - but as a billionaire he was connected to almost everyone in politics and culture, so when he was found dead in his jail cell, denied bail on a new charge, there began concerns someone had him killed to keep him silent.

Would someone rich not want to spend the rest of his life in jail, where if stories are true a lot of criminals treat child rapists pretty poorly? Would such a person perhaps pay a lot of money to get the chance to end his plight quickly? Or even be charming enough to get such a chance for free? It's certainly plausible. Yet far less plausible is that Clinton or Trump had him killed, but conspiracy theorists have gone there.

I joke about your friend in the title but in more severe conspiracy cases, the problem runs deep - and so they may not be friends of yours. Or anyone else.

It sounds far-fetched but they are not alone. Organic industry trade groups, along with political allies in the NYU Arthur L. Carter Journalism Institute, a group they control at UC San Francisco ("Industry Docs"), and other coastal schools routinely claim that science itself is a corporate conspiracy. It sounds wacky, but according to a new analysis in PLOS, if you met them on the street they would seem normal.  If you ever did meet them. The study found that such conspiracy theorists suffer from a lack of interpersonal trust and that may be what enables them to demonize other people. But if you met them, they might seem affable, at least unless you reveal you are a biologist or science journalist. When you hit on that hot button issue, their demeanor might change, and you might get a subtweet about meeting them you suggesting that Monsanto is really not gone, it is in hiding and secretly pulling the strings of 100,000 scientists, much like if someone believes Elvis, Lady Diana, and Colonel Sanders are running the economy from some secret mountain lair. And maybe Big Food arranged for you to meet them to try and sway them to the Dark Side, but they will declare they are 'more determined than ever to expose the conspiracy.'

Yet in their conspiracy theories, there is a big disconnect, including contradictory beliefs, like that Lady Diana simultaneously was killed by MI6 or that she faked her own death to get out of the public eye, or that Monsanto was able to buy off 100,000 scientists on GMOs but Exxon could not buy off 10,000 scientists on climate change, even with 20X the revenue of Monsanto. On any issues outside their pet conspiracy theory, people can see the inconsistency.

Conspiracy theorists get one thing right; social media. They dominate it. That's because most conspiracy theorists don't have crazy hair and tinfoil lining in their hats, they are just conspiracists about one or two things - so they may not trust FDA when it comes to science but they sure trust Twitter when it comes to promoting conspiracies about FDA. And they use social media like it's their jobs.(1)

They may make it like a job for validation, because conspiracy theorists, from HAARP to vaccines to organic food, often suffer from psychological issues that make them feel powerless. That self-esteem issue causes them to hide behind a keyboard and attack people they believe are part of the conspiracy.

The analysis used Reddit's conspiracy forum and the analysis provides a conclusion anyone not a conspiracy theorist can see from the outside - from Epstein to anti-vaxxers to anti-GMO, conspiracy theorists most often self-select into communities of like-minded people and that community amplifies their beliefs. Then the more aggressive will go into other communities and tell actual experts they are either overtly part of the conspiracy or unwitting dupes.

But they won't buy into everything. Though they may believe I control all of science media, when it comes to beliefs about police officers and violence, for example, their views might be a lot more evidence-based.

U.S. Right To Know, one of the organic industry trade groups that refuses to believe Monsanto is gone. They do, however, insist I control all of science media, which is nice. They can't claim I am a shill for Monsanto, because Monsanto never donated here, so they claim I 'love' the company, despite the numerous times I have ridiculed the company. Really, conspiracy theorists can move the goalposts of logic to make any kooky belief work.

Full-on conspiracy theorists often distrust both government authority and experts, which doesn't seem to create a disconnect. No one wants an anti-vaccine Facebook page moderator doing their brain surgery but some are happy to abdicate the health of children to them despite similar lack of medical knowledge.

New Yorker illustrator Will McPhail was likewise on point with this cartoon about a passenger who says pilots are out of touch and he should fly the plane. 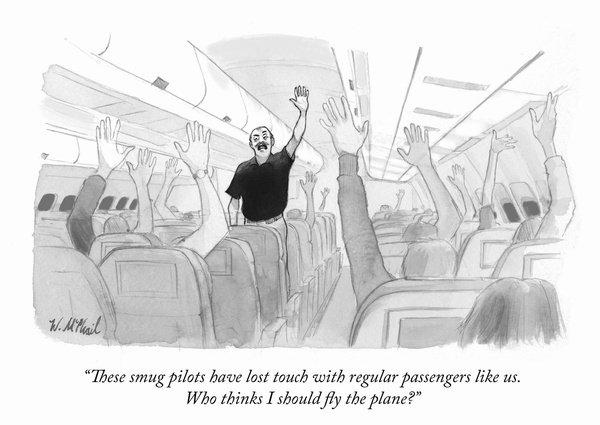 They may not be pathological. Conspiracy theorists, from Naomi Oreskes to Bill McKibben, can easily see the humor in this while rationalizing that is not them - they are instead critical thinkers, as a study of conspiracy theorists noted was the common way of framing their own beliefs.

Some conspiracy theories are real world events, of course. I have noted that on our commenting system, Disqus, every comment I make, no matter how innocuous, will get downvoted 16 times. - even when I comment a month later, or about something unrelated to science. 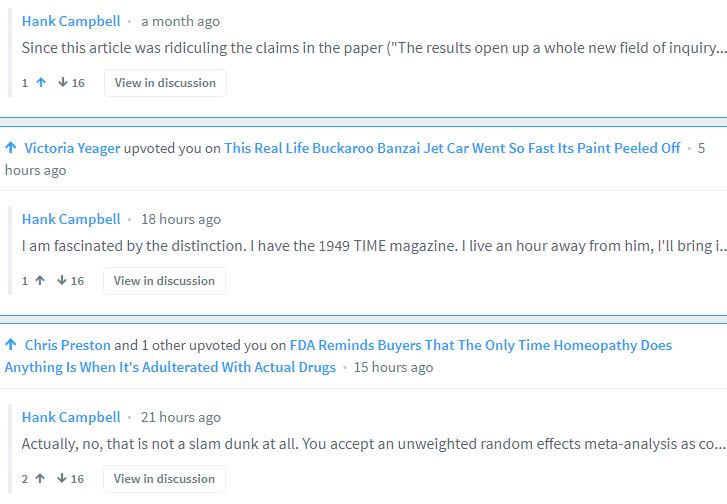 That is clearly a concerted effort by activists opposed to science to keep comments from appearing on other Disqus-comment sites. But because they are conspiracy theorists they miss the point; I am not like them, so I am not running around to organic food sites telling shoppers how dumb they are. They are doing exactly that on every site that contains science articles about agriculture. The surest sign of a conspiracy theorist(2) is that they believe the world is out to get their pet issue, so they engage in exactly the kind of behavior they believe others do.

It also makes them pretty easy to wind up. For our annual Ugly Christmas Sweater party, mine is already chosen: 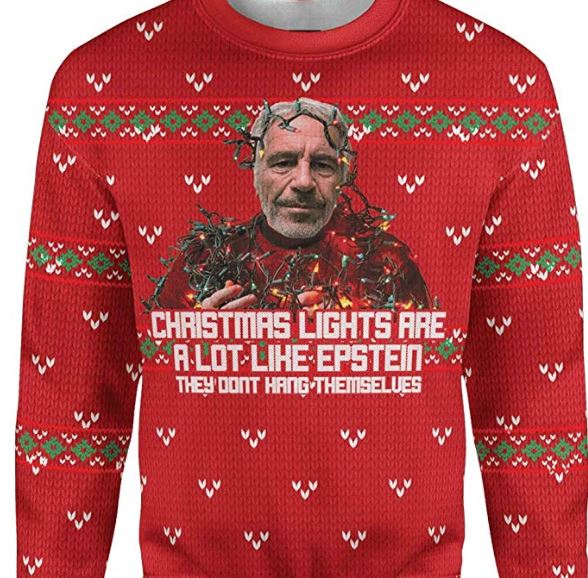 (1) Since the data were a conspiracy subreddit, it is entirely possible that they have even gamed the study, by creating multiple accounts that then got analyzed as if they were unique.

(2) They had done it to numerous scientists so their comments never showed up here. When I discovered what they were doing I went through the spam flags for the last few months and had to manually whitelist them. Their "reputation" was low like mine, because of a systematic effort to silence them.
Science 2.0
More Articles All Articles
About