Hank Campbell
Energy is the great equalizer in human existence.

Don't have enough water? Energy can fix that. Want to make a culture that prizes libraries, art, and education? Give people affordable energy. We can even do what ancient alchemists could not, turn lead into gold, with enough energy.

It goes almost without saying that energy made the difference when it comes to farming. In the early days of agriculture, one person might work harder than another, and they might even be prized for that, but nothing boosted productivity like when oxen came into use. No person could do the work of eight others but the ox could. Then the heavy plow raised the bar of energy efficiency again, and then the tractor.

Energy, technology and science have all combined to create a breathtakingly efficient modern world.  But as we have gotten more advanced, some began to long more for the past.  They believe a sunken continent of Atlantis had space travel, they believe herbs are superior to medicine, and that food using older pesticides is nutritionally superior to food grown using more efficient pesticides.

Though there has never been a time in history with less danger, less infant mortality, less poverty and less inequality, only 6 percent of Americans think we are better off than people in the past. Despite the clear superiority of the modern world, we have Natural Resources Defense Council claiming salt is an endocrine disruptor, trial lawyers claiming baby powder causes cancer, and Non-GMO Project selling stickers for organic toilet paper.

Actual farmers of the past did not think much of the bucolic narratives manufactured by hobbyist gardeners of today, the Michael Pollan's and such of western wealthy intelligentsia. The Annual Report of the State Board of Agriculture in Missouri, Volume 17, from 1883, tells us what they prized. Even when it came to little things like lighting their homes, they wanted nothing to do with olden days; "When we remember how our fathers were forced to get along somehow without either oil or gas, we cannot repress a feeling of sympathy and an emotion of wonder as to how they did it." 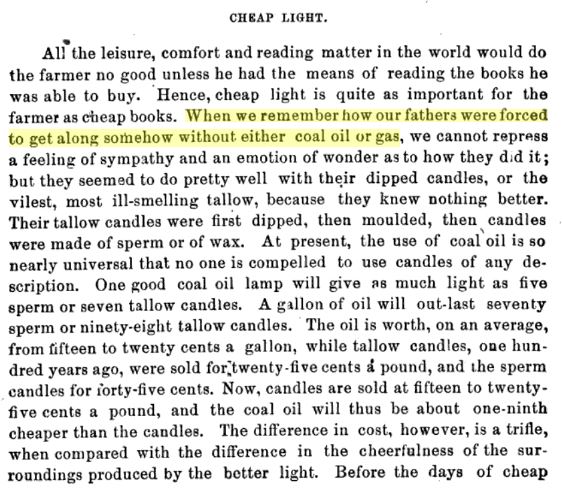 They liked progress. They wanted more of it. And we have provided it, so they would be mystified at why anyone would want to go back to darkness.

Energy is not alone in being better due to progress. Once upon a time, cotton was so expensive it could only be afforded by nobility. In 1883, less than 25 years after Edwin Drake struck "rock oil" in 1859 in Titusville, Pennsylvania, coal oil already cost 10 percent as much as equivalent candle light, and that was after candles had a 5,000 year head start and Big Candle had enjoyed as much dominance as it ever would. By 1883, everyone preferred, and could afford, coal oil lamps. Prior to 1859 the energy debate had been about the need to mitigate and ration energy because too many people existed to be supplied by whale oil and alcohol was too expensive to make.

Mitigate and ration so only wealthy elites could afford energy? It sounds a lot like  environmental groups today.

Science and technology eliminated the whale oil supply problem, and the candles everyone hated right along with it.

Agriculture did the same, beginning right after Thomas Malthus claimed we shouldn't do anything to feed the poor because they would just breed and breed. Malthus was shown to be a somewhat ridiculous doomsday prophet after the widespread use of synthetic fertilizers and then pesticides, in the same way modern day apolcalypto Paul Ehrlich is derided today. The difference between them was Malthus said we shouldn't and Ehrlich said we couldn't; we lacked the resources due to inequality caused by modern markets, he believed. Karl Marx also hated capitalism and thought pesky free markets needed to be overthrown but during his lifetime the wealth of the average European went up 300 percent - because improvements in farming caused the price of food to drop.

Ehrlich has an even worse legacy problem.  Real data about food production. 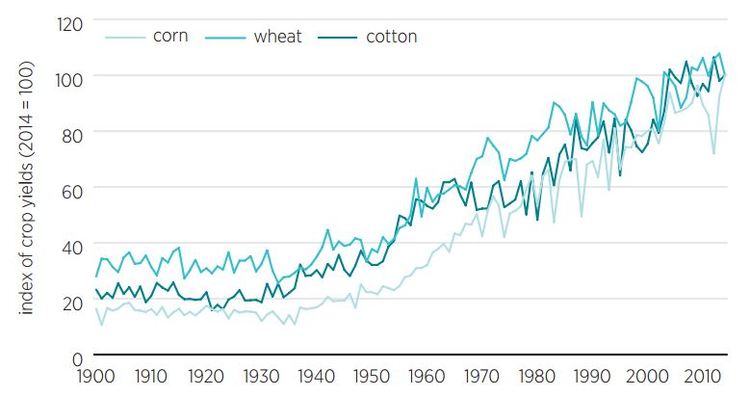 Since he was born in 1932, farmers have produced 400 percent more wheat, in defiance of his Population Bomb prognostications. All while being more sustainable than ever.

Affordable basic necessities lead to culture across the board

As basic necessities drop in price, education, art, and science - culture - flourish. We saw it in the U.S., when a Tennessee Valley Authority dam brought affordable energy and therefore low cost food to people who once lived in shacks. Without electricity, they couldn't have running water, refrigerators, electric lights, or a family radio. Once they could afford the energy to irrigate crops, they were able to grow enough to sell them. The first thing most of those families bought with the new wealth? An electric washing machine.

Why do environmental groups now oppose washing machines for everyone? And affordable centralized energy instead of a billion people getting by burning wood and dung?

As Johan Norberg notes in The Spectator, indignant rage about ever narrower definitions of inequality is the purview of wealthy societies. Organic trade groups can rail against competitors for their clients because a tiny fraction of produce can be more expensive due to a different process, one with an environmental halo, and no one starves.

With basic needs met we can complain about a lack of solar panels, but people in 1883 would think we are out of our minds subsidizing rich people in Malibu and Napa while forcing conventional energy customers to pay for it - hundreds of billions of dollars to-date.  They would absolutely not want an alternative energy for rich people to be paid for by the poor, or those in apartments, or in areas where solar is useless.  Yet that is exactly how solar subsidies are funded. That's no model for food, government should not be subsidizing organic farmer's markets and then sending people on food stamps to them. Yet they do.

The world is not worse, we just like to 'live in important times'

At Arizona State University, students are petitioning to ban immigration. No, they are not on Team Trump, they want to ban legal immigration, from China, and found a reason when they believed they were at risk - a case of coronavirus was reported on campus. Almost all cases of death have been older men with pre-existing conditions but young people need to 'live in important times' so it is the case in each generation that young people claim the older generation has made a mess of things and they will fix it.

Yet history shows those positions soften with time. There is a well-known phenomenon that causes people unhappy when they are young to regard their youth as a Golden Age for the country and tell their descendants how much better things used to be. It's called nostalgia, and nostalgia is fine for cultural retrospectives but it is terrible science policy. Any farmer from 1883 could tell you that.
Science 2.0
More Articles All Articles
About