Hank Campbell
Like most writers, Sage Boggs (also on Bandcamp) is a curious guy. At a party he saw there were Triscuits, the snack crackers, and asked why they were named Triscuits.

No one knew. Little shock there, most people also won't know the origin of "portmanteau" but it would be easy to assume that Triscuit is a play on Biscuit, so maybe it had three - tri - of something instead of two - bi - that regular crackers at the time had? Google had no clue but Google is just a search engine parsing content written by people who also don't know (except on Wikipedia, that is confidently written by people who definitely don't know - or who are working for anti-science groups, if you see what they have done to the Science 2.0 entry).

So he wrote to Nabisco to find out. Nabisco didn't start the company, they acquired it, so their interest at the time was the financial records, not the secret historical ones, yet they replied it was not tri as in three.

It's always strange when a company has records to show what the etymology of their brand isn't but not what it is.

Undeterred, he did the next best thing. He went to their advertising. And found this. 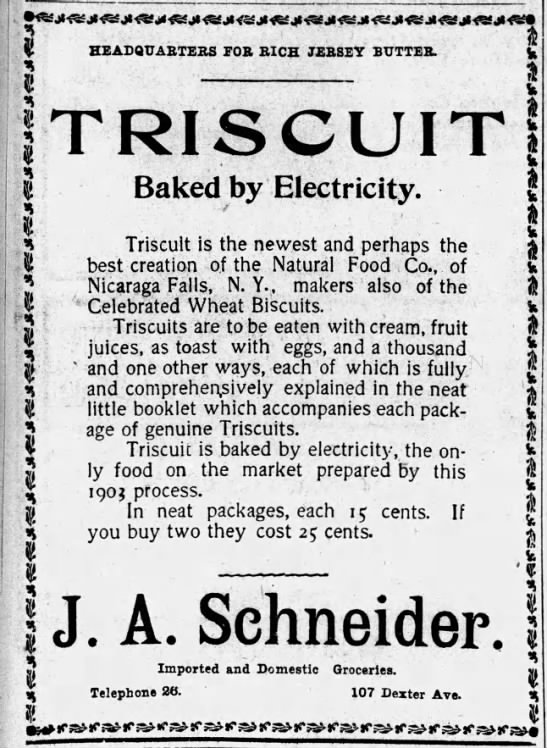 In the early 1900's, Triscuit was a product of the Natural Food Co. of Niagara Falls. And a big selling point for them in 1903 was that they were the only cracker "baked by electricity."

In 1895, after a two-year evaluation of competing proposals between Thomas Edison's DC system and the Westinghouse proposal of AC (Alternating Current rather than Direct, as in DC), a panel led by Lord Kelvin chose AC to turn Niagara Falls into an electricity generator.(1) The switch was thrown and the Edward Dean Adams Power Plant, the first large AC plant in the entire world, went online, and by 1896 it sent electricity all the way to Buffalo. It's still in operation and original parts of it that remain are now a national historic landmark.

Seven years later Triscuit was advertising itself as "the only food on the market prepared by this 1903 process." They were cutting-edge technology and wanted everyone to know it. The whole thing screams progress. 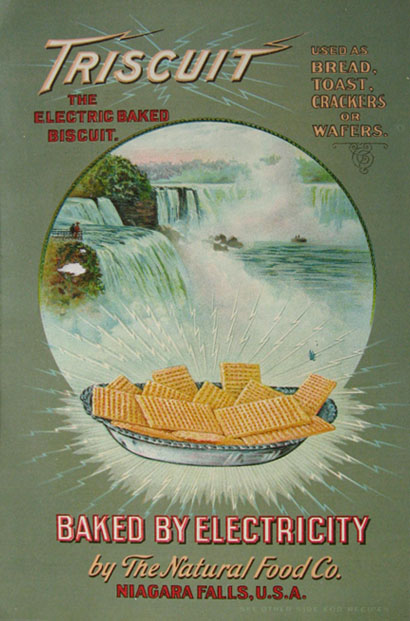 And Boggs said that was when it clicked for him. Since electricity was still a new-ish word for much of the public, shortened forms had not been settled on yet.(2) Some would eventually make product names using portmanteaus of the "elec" or "tric" sounds but the pronunciation of the word uses an "s". He believes that the "tris" in electricity got cobbled together with biscuit to form triscuit.

In the early 1900's, Triscuit was run out of Niagara Falls. And their big selling point? Being "baked by electricity." They were "the only food on the market prepared by this 1903 process." Look at the lightning bolts! And that's when it clicked--

Sounds pretty reasonable to me. Names are often done that way, even more often than when they are just made up, like "Camaro." But General Motors was prepare for that decades later, so they invented a fun fake history. When reporters asked GM what a Camaro was the reply went that it was "a small, vicious animal that eats Mustangs." You know, because Ford made a car called a Mustang.

What do you think, linguistics community? Does this portmanteau idea hold up?

(1) Contrary to what many think, Edison was not wrong either. Though AC brings the electricity to your house, it is converted to DC for use inside your phone, tablet, or computer. So they both won.