Hank Campbell
I don't drink much milk now, though I did when I was a kid. I think I eat more cheese than I did then, and that makes sense. We were a poor family on a subsistence farm and cheese is expensive. Milk was not. At least if you got it right from the farmer.

But most of us don't get it right from the farmer, which is one reason why an increase in milk prices in the U.S. won't help dairy farmers much, any more than it will in Australia or any other country. Most people do not buy dairy products from a local farmer, they buy food in stores. And the products in those stores may not even have been made using milk from this country.

Want to buy wholesome organic Stonyfield yogurt, the company behind the Just Label It campaign to get warning put on GMO foods? Their company was built using powdered milk shipped from overseas on emissions-belching ships. Apparently milk wasn't cheap enough in New Hampshire, though they show a lot of bucolic imagery on their website.(1) And President Donald Trump went to the mattresses against Canada over their dairy protectionism, which penalized American farmers in Canada, but Wisconsin alone produces more milk than that entire country so we can't blame Canada for the problem dairy farmers now face.

The problem is more fundamental.

The plain truth is that milk drinking is down, and the situation could be a lot worse

I have one son that never drinks milk and one that occasionally does. Neither uses it in cereal, which I find bizarre, but perhaps only because I always have cereal that way. Statistics show they are more accurate reflections of modern America than I am. Milk consumption has plummeted since I was young, down 50% in the last 40 years.

There is no easy-to-define fundamental shift, lactose intolerant people are still ~5% of the public while vegans/vegetarians that gravitate toward almond milk and other "plant juice" substitutes remain around 10%. Yet plant milks have stolen some of the health buzz dairy used to have. 82% of non-dairy buyers also buy real milk or half-and-half, so they are not fundamentally opposed to dairy, they just think alternatives are healthier.

No one with a clue about science takes PETA seriously, the only people convinced by this are probably not buying dairy anyway, but in an avalanche every snowflake will take credit. Credit: PETA.

What have dairy trade groups offered in response that got any traction? Chocolate milk as health food.

Cheese is the one bright spot for dairy.  If not for cheese, things would be really bad. We are bigger connoisseurs of cheese than France, consumption is growing each year, up about 20 percent for some cheeses since 2007, and we even exported 300,000 metric tons of it last year. It takes about 10 lbs. of milk to make a pound of cheese and there is no good substitute for milk yet. There will be, and vegan cheese consumers may be happy eating human DNA instead of milk, but most people won't go there. For now, cheese is that 1950s bowling alley in "Pleasantville", a safe place to remember how things were.

Yet we have to think about how things are too. The price farmers get for milk has dropped in the last five years, from $23-24 per 100 lbs. to around $16. Most of you know a gallon of water weighs 8 lbs. so for 12 gallons of milk they are getting just over a buck and a quarter each. When you think about the costs of labor, regulatory compliance, equipment, feed, and the animals, dairy farming is now bordering on breaking even just for the privilege of milking cows.

Imagine what car companies would be doing if the prices on their cars went down each year while costs went up. They'd consolidate, and they would limit supply.

That is not happening in farming. Despite claims by environmental groups, there is really no omnipresent factory farming in the U.S. so limiting supply is not easy. Instead of a few dozen car companies that could merge as competition picked winners and losers, like in the Golden Age of Automotive, America has 2.1 million family farms, a million of of which make $10,000 a year or less. There is so little large farming that only 0.4% of farms pay estate taxes when the next generation gets the business. Farming is a maverick lifestyle, it is a calling, it is a family heritage, and none of those qualities lend themselves to one farmer saying to others, 'I want to buy all of you out and make something that can scale.'  One larger owner trying to buy up a lot of smaller ones is how range wars start in cowboy films because that's how actual range wars started.

Yet everyone else in the food chain has done just that. Processors and supermarkets, not to mention competition from the international market, are all optimized for modern competition. Dairy has been better about the new reality, that the world is now our supermarket, than some farmers. USDA says the number of dairy farms has dropped from 650,000 dairy farms when I started elementary school to around 40,000 now. Half of dairy farms now have 900 cows, 10 times more than when I graduated from college in 1987, which means more efficiency.

What if just the price paid to farmers increased?

Increased costs are borne by consumers because, let's be honest, processors and supermarkets are going to pass it along. Raising the price for milk, a product in decline, will do more harm than good for people who, like farmers, aren't rich. We'll end up with poor people buying even less of what is currently an affordable nutritious part of diets.

On the international market smaller farmers are also in peril from competitors because the dollar fluctuates. Two administrations ago, President George W. Bush got back at Europe's protests over our War on Terror by letting the dollar start to drop. European tourists bragged because they felt richer coming here, bloggers cheered it was punishment for American imperialism, but European farmers and manufacturers knew exactly what he was doing and they were enraged, because the exchange rate made their goods far more expensive.  They still had to pay in euros but sell in dollars, which were suddenly worth a lot less. European politicians complained but it helped America when the world economy lost $17 trillion in 2008 - that could have been a lot worse here also. During most of the Obama years America was still so cheap for foreign trade, thanks to a low dollar, that American companies benefited. Apple introduced the iPhone 3GS in June of 2009 and it still sold a million units opening weekend despite the economic meltdown. Look at this graphic and you can see why. It was a steal in other countries because of the low dollar. 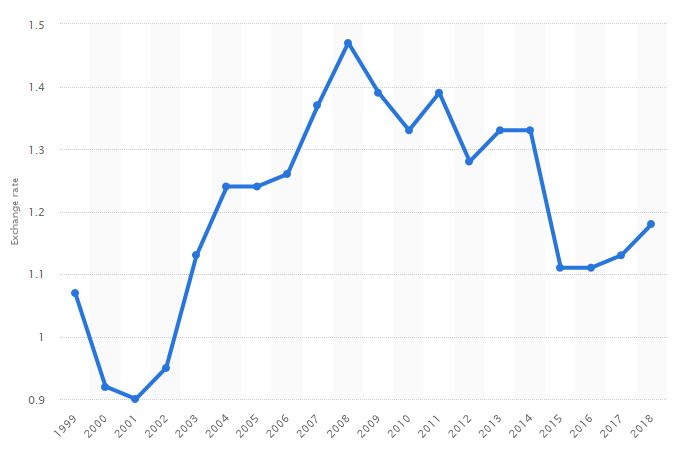 President Trump prefers a stronger dollar, and that makes imports cheaper but obviously makes exports less competitive, so if dairy prices are also raised our 300,000 kilos of cheese will likely drop, unless it's being bought by the same wealthy elites there that are buying French butter here.

Food is a strategic resource, like science and national defense, and it is absolutely true that strategic resources should not be outsourced to international competitors, which means sometimes you need a minimum price for foods, but the Dairy Margin Protection Program isn't a socialist net and can't be. A minimum price without supply management is going to mean even more milk at higher cost. It will mean farmers producing a product no one needs and still getting paid to do it. It will mean some farmers getting into the business despite lack of demand. I am a writer at a nonprofit, you can bet the minute no one wants what I do, there will be no bailout for me.

Going organic for milk won't help, that market has stalled

Organic shoppers pay a premium for milk, like they do everything, but good luck finding an organic milk cooperative with an opening. They have no more demand. It would be a mistake for mainstream farming to adopt business practices even high margin organic farming won't touch.

What is more likely than the price going back to 2014 price levels when supply is still high is that supply cuts will happen. No one wants to be on the negative side of that so it might be worth scaling up to get costs down. If that makes no sense, it might be worth helping someone else scale up by selling out. I'm not telling anyone what to do, and I am not saying farmers should be despondent, but they shouldn't be romantic either. No one else works for nothing just because their grandparents did the same job and I hate reading stories of bankruptcy or, even worse, suicide. I grew up on a farm, I appreciate farming and respect the people who do it, I give talks all over the country on telling the public about agriculture, but being poor on a farm is why I got a scholarship to college.

For my part, I hope milk bounces back so market corrections aren't too drastic. If it's increased cheese demand driving it, okay, and I still have milk in my cereal four mornings a week. One day a week I go to a diner. Those egg and bacon folks need my support also.

(1) So you are eating a big spoon of Stonyfield global warming too. Some imports are bizarre. Why do we import 80,000 kilograms of butter per month from France? And that is just the quantity imported at the lowest tariff rate, which requires a USDA license and must be disclosed. Normal tariff imports do not need a license. American dairy farmers have it tough but somehow it's cheaper to import 600,000 kilograms per year of dried skim milk all the way from Australia, even with a tariff.
Science 2.0
More Articles All Articles
About